Wing-design for a Bird that Needs No Lift

Due to a reason that we don't need to get into (or explain), some large birds have developed the ability to float. There is no scientific explanation to how they can float, it's just happened and we do not need to know why.

The nature of this ability is such that they can float for long hours, though they will eventually tire. Also, floating is a conscious activity and they can't do it while sleeping, so they need to land to rest or sleep.

The birds can float constantly at a particular height, or fly upwards to a certain altitude (at a fair clip), or dive at faster than gravity acceleration and even slow down at will. Lastly, the ability to float is practically unaffected by the weight of the birds.

I theorize that with no weight constraints on lift, the birds are likely to grow considerably larger.

Another major implication appears to be that with the function of lift now already served, their wings would evolve to super-specialize in horizontal propulsion and deft maneuvers in the air.

What kind of wing-design would be best suited to this?

Note: This is not to be confused with my other question about African Wild Dogs

OK, this is abusing the floating ability a little, but since there are no explanation provided for how it works, I would just assume that it can be used to float upwards without a lot of effort.

When the bird has gained altitude, it can start to dive, and transform the vertical velocity to horizontal velocity with the wings.

From an aviation point of view, altitude is just stored speed. Therefore, if you can float upwards for free, you can also get movement for free. 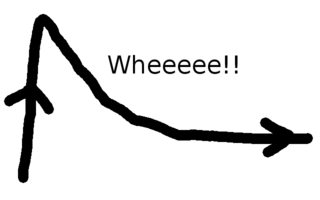 Because of that, the creature do not necessarily need any other ways of propulsion, and can be similar in shape to a flying wing, focusing mostly on a high lift-to-drag ratio. To be able to make the turn from vertical to horizontal flight, the creature also needs a tail to create yaw for a high angle of attack. 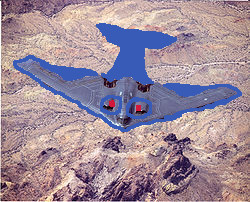 Any similarity to a Northrop Grumman B-2 Spirit is purely coincidental.

I believe instead of different wings they would develop a kind of backwing similar to the tail with which most fish propel themselves. Most birds already have a set of feathers at their back end which they can control and use for stability in flight.

The tail would develop to become much bigger since air is less dense than water and thus they need more surface for the same speed.
They wont grow to be considerably larger since they would need more energy to move if they had more inert mass. And this would require even more food to sustain them.

Their normal set of wings could develop to be more useful for horizontal movement to aid the backwing or just be used for something else useful, like attacking and defending or just get useless and at some point vanish.

Edit: I just saw the conversation in the comments and can't oversee the similarity. Funny coincidence

This actually sounds possible and doable from an evolutionary perspective. There are lots of birds which spend a great deal of time in the water as part of their hunting behaviours, like Cormorants and Loons, and they have evolved various hydrodynamic adaptations to improve their performance underwater as they dive.

The master of this class of birds is the Penguin, which long ago lost its ability to fly in air, and evolution has made penguins highly hydrodynamic. Unlike fish, who swim using their tails, Penguins use "powered" underwater flight with their wings (which are very paddle or fin shaped to function underwater, unlike their flying cousins).

To go for size and floating, Penguins need to evolve for greater size and the ability to remain in the water full time. In a very old book of mine called "After Man", biologist Dougal Dixon actually makes the case in an imagined future. Some unspecified catastrophe renders humankind extinct, and many other species follow, including the great whales. Penguins move into the niche, becoming larger in size and developing the ability to bring their chicks to full term inside their bodies. The whale analogue, known as the "Porpin" becomes very similar to the extinct species of whales and dolphins whose niches they inhabit due to "convergent evolution" (i.e. very different species evolve into very similar forms since they inhabit the same niches. In the oceans, sharks, ichthyosaurs and dolphins have undergone convergent evolution despite having very different ancestors). 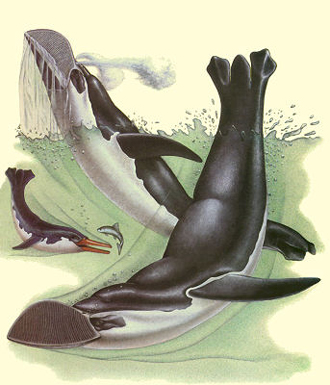 So you have the conditions to create a very large, non flying bird with the ability to float.

I can think of a few very different designs that could come of, essentially, anti-gravity birds.

Since wings are not needed to generate lift, they become simply rudders. The wings would be there only as guidance, not as lift, which means they would be fairly stubby. Of course, water is thicker than air, so the wings would probably still need feathers to catch the air, but the wings themselves would be stubby and thick, used for quick bursts of forward motion and direction changes. As penguins hunt fish, these birds would hunt other birds (see "bubble birds" below).

Falcons are fast. They can bunch up their wings and bodies to achieve astounding speeds using nothing but gravity. But if they can zoom up and down with a thought, why not use both directions to increase speed? Their wings would extend backwards as they become more sail-like, essentially becoming a flying wing. With rapid upward and downward motion, wind force would shove them forward at immense speed; I imagine the upper speed limit would be near the speed of sound. They would also grow denser bones, to survive impacts at those high speeds. These birds could hunt anything on land or in the air.

While some birds are in the air to hunt, other birds only take to the skies to move location. In those cases, wings are only useful for staying up; without a real need for wings, they eventually become tiny fluttery stumps, like the fins on a seahorse. They use their innate hover ability to rise and fall, riding air currents. They stay out of danger by simply floating away, or dropping out of the sky. They probably eat berries and seeds, or small ground bugs.

Birds that eat bugs need speed, but not stopping power. They're fast, but don't need huge muscles to rip their prey apart. Instead, these bird will evolve longer, thinner bodies, with long, fluffy plumage. Rather than flapping, they snake back and forth, zipping forward and turning on a dime. They eat small flying bugs.

Finally, larger predators use their body weight and sharp talons to knock their prey over and gut them, hunting animals as large as goats and sheep. Without a need to balance flight and size, these birds will become absolutely massive. I mean huge. They may not have big wings, but they will be dense as rocks. Think flying turtle dense. Eventually, they will have enough weight that they can simply plummet from the sky and crush whatever creature is below them. Thus the name. First, a shadow; then, THUD, a smashed deer. Or cow. These birds could get big enough to mush anything and everything, and eat what's left.

Depending on how the animal in question needs to fly, it could be solved just by having a a few "gas sacks" of sorts, with a couple of them being specially designed air bladders that contracted and expanded (like a lung), propelling it with sort of a rocket design by utilizing fins and forced air from the other side.

The animal would likely be made as aerodynamic as possible (think of a squid), and have control of it's thrust. Ideally, it would evolve to have a beak at the front that closed to be an airtight design; thereby allowing it to eat likely by piercing other animals, then returning to it's den or home with its fresh prey.

As for the specifics, the air bladders used to propel the animal would be independently contracted and expanded to allow for continuous thrust (think of a Y shape with air bladders attached). The gas bags would hold it aloft, and it would use hydrolysis to gather hydrogen from water and replenish these containers.

The animal would not utilize wings, but rather rigid fins with the ability to turn in multiple directions by a muscle located at the base to control the movement.

This is the best idea I could think of, but does come with a relative size restraint, as the amount of propulsion would be.....dangerous with larger and larger sizes (although theoretically it could be done).

The wings would be more "fins" than wings, but the muscle would (if the animal is horizontal) be able to twist them vertically.

They could also use (if you're going with an almost squid design) the tentacles as an air brake to stop.

Not the answer you're looking for? Browse other questions tagged reality-check creature-design flight avian .

4
The Evolution of African Wild Dogs who can float

60
A Bird that Never Touches Ground
5
Could a bird be a match for a small airship?
7
Wing surface area for large flying creatures
4
The Evolution of African Wild Dogs who can float
6
Air bladders in bat-like skin wings for better lift?
6
Armor design for bird people? | Gliding
7
What Is The Best Wing Design For A Giant Flying Animal
8
How would the anatomy of a bird that flies with its legs work?
4
Is it effective for a dragon to have a bat-like wing structure with feathers?