How can I avoid a spark on an oxygen-rich planet

My NASA-like scientists in a system far, far away, but otherwise similar to us today, understand that their nearest sister planet, Sunev, is habitable for mankind.

With one exception: it is almost pure oxygen. My space program really wants to get a scientist out there, but the likelihood of entry and landing could ignite large pockets of combustion.

Is there any way for my-NASA to land astronauts on Sunev, conduct studies in their gas filter masks, and return?

If it's too hard, I'm happy to leave my scientist astronauts there forever. We don't think there's any life on the planet, but they volunteered the possible eventuality that there might soon be death on the planet.

Another answer is good, but a bit too narrow. So let's talk about it one by one:

Will not burn. There is oxygen in it, but no fuel

One might be concerned about afterburner-like effect. That's not a problem. It's a benefit, if anything. Afterburners work because not all oxygen is used up by main engine. Fuel is used up completely - because carrying fuel is expensive and oxygen is simply there. Thus, engines are designed to avoid fuel waste, not oxygen waste, On a spaceship you may be sure atmospheric oxygen would be taken into account. You will get normal engine exhaust, with less massive rocket (because you don't need to carry oxygen). If your rocket scientist can send rockets to orbit, they will be able to calculate that, no problem.

Oxygen for breathing is already there, isn't it? So nitrogen tanks and mixers will suffice - for about 21% to 25% lower mass. OR lowered pressure somehow. Was good enough for astronauts of Apollo program.

For details, see this answer on Space Exploration.

Apollo 1 fire was a big tragedy. But it set a foundation. Nothing in space craft interior will spark again. Nothing in space will be flammable in pure oxygen. Not again. OK, maybe something will, but it really shouldn't. NASA did a huge job to make sure it won't happen, and rules against fire are set high, meant to be suitable to pure oxygen. Other space agencies plan for that as well - better safe than baked. Of course pure oxygen atmosphere is not used anymore, but precautions are set in place.

Rocket engines work with pure liquid oxygen and other strong oxidizing agents. So conditions would be pretty much normal for them. Of course jet engines do not, and that's what you want to use with free oxygen readily available, but materials and knowledge are there. No problem. Just some testing and engineering to match two already related technologies.

This would be a main issue. Stainless steel is brittle. Painted steel is not safe, there is to much risk of scratching it on a planet. Ceramic tiles can be knocked out. For interior it was figured out - but in conditions with moderate temperatures and low risk of scratches.

Composite materials for lander would probably work. Few layers with different properties. And very limited time dirtside. I'm pretty sure it can be done with modern tech. I'd go for steel or aluminium covered with fiberglass covered with ceramics for parts under heavy load, and fiberglass + ceramics for the rest, but I'm no space engineer. Just give them two years, funds and reason and they will make it, sure bet.

Oxygen is an oxidizer, not fuel. As long as they're not landing in a ship made of fuel, or otherwise easily oxidized, they should be alright.

For the most part, any exposed fuel sources (which is a bigger list in a pure oxygen environment) will oxidize in a non-explosive-oh-god-why kind of way. For instance iron will oxidize (commonly known as rusting) and the rust (iron oxide) will form a protective layer against further oxidation.

When I saw this question I was immediately reminded of the fire triangle: 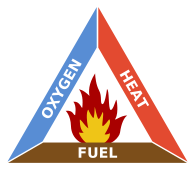 The Mythbusters did an episode about one of the Bourne movies, in which the hero sets up a diversion: natural gas from the stove, and a magazine stuffed into a toaster oven. The idea was that the eventual ignition of the magazine would trigger an explosion for the pursuing bad guys.

They utilized principles from stoichiometry to determine what the best ratio of gas was for an explosion. Basically with the wrong fuel mixture, objects burn more or less intensely, but an explosion wasn't possible.

I agree with the other answers - as long as you're not providing fuel and heat, having an oxygen-rich environment isn't necessarily a fire or explosion hazard.

Not the answer you're looking for? Browse other questions tagged planets space-travel atmosphere or ask your own question.

6
Can we land on a planet with methane-oxygen atmosphere?