How can I design an imaginary internet protocol? [closed]

For a cyberpunk world, I designed a history that includes inventions. Since this is similar to an alternate Earth timeline, I'd like to explain an internet-like service that is based on computers (not necessarily Neumann-based design, but rather something that can be understood by us too) but on a new protocol. It may keep basic features, such as dynamic routing, but I definitely need to find out something new, because according to the story, a new protocol was established based on a previous one, that is used for advanced surveillance and control.

Which are the considerations of computer science and data science I should be aware when I implement such a thing?

Let me give you some advice from my point of view as a former network administrator (my English won't be very good tho, unfortunately).

First of all, I highly doubt you actually need to design a protocol (i.e. write the specification). More likely, you want to describe protocol requirements - answer the question "what features does this protocol have".

Speaking of requirements, it's reasonable to assume your global network will do the same things our Internet already does plus something more. Therefore, your protocol should share standard IP requirements:

Now, speaking of imaginary future networks, a couple of things comes to my mind:

Several things that can be tricky:

When reading "steampunk" and "internet", somehow I remembered how they do find damaged parts of telecommunication cables burried in earth: air pressure.

So I have three more steam punk like data systems for you to offer :)

I can't deliver such fine answers like the other two guys who did so at this moment, but I may suggest that you could go for a pressure based analog data transmitting system. At least that would be very steampunky. It would be sloooow as hell, would need a lot signal-refreshers and of course need to be powered by steam pressure, but it might work.

Biggest problem would be the noise-signal separation and correct error-handling. But for the sake of security, you could add some kind of gas that is unique for every "provider". And you could follow the pipes more easily than cables.

Alternative use a air pressure delivery system - just send punch-cards though it. Will have the same limitations as the pressured system, and needs... operators that shift these capsules from one pipe to the next one over longer distances.

At the upside, you could mail slices of pizza and bugs would appear in a pretty other way...

Finding out who did send what is a matter of reverse following a capsule and asking the operators, or look inside their protocols.

Huh... if you do know the disc-world... they do use semaphore for transmitting data. Install a clockwork robot that does the transmitting at every station. While you could not send pizza, at least you don't have to worry about leaks any more.

So... that might not be an answer to your question at all, but if you are willing to give up the 0 and 1 Internet for something more punky, than you could use this. Establishing a protocol for one of these would be... interesting.

pipe-pressure would be hard to direct, but the capsule just need a adress written on it, while the semaphore could go for a dialing-system. More... may come later, if you seriously start considering this.

Parsing your question, it sounds like you are looking for a somewhat dystopian setting where people are being monitored as they use the Internet (hello Google, FaceBook, Twitter etc.), but at a more technical level.

So I would suggest you go into the past and look at such former network protocols as the Token Ring LAN system. The system is innocuous itself, every time a user accesses the network, a "token" packet is generated and it essentially clears the way for the data to move from one system to the next. When the token is received at the other machine, it can then be "handed off" to the next user and so on. 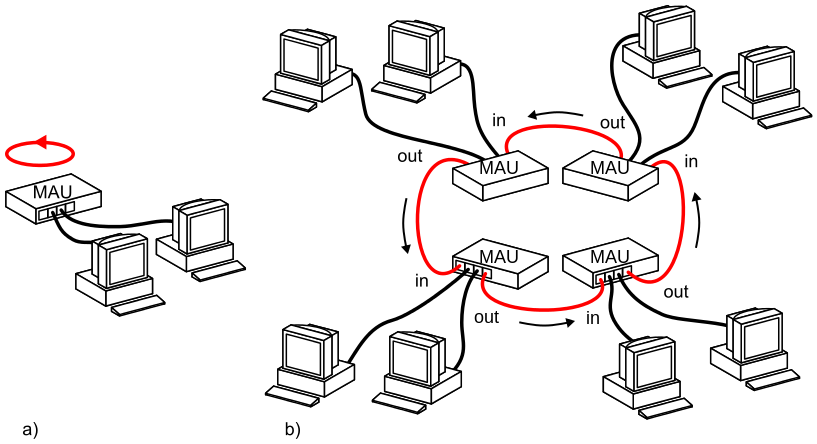 From the description and diagrams, you can see the limitations of the system, essentially it forces one user at a time to access the network in order to prevent data from "crashing" into other data streams, and as you scale networks, it becomes increasingly hardware intensive.

For dystopia, this is a feature, not a bug! Network use is limited to whoever has the "token", so users are easy to track. "Big Brother", corporate snoops or whoever your Big Bad is can relatively easily monitor people through control of the Multistation Access Units (MAU's) much like anyone with control of a router on today's networks can control their network, and "throttling" , limiting access or even banning users altogether is much simpler. (Please, no "One Ring" puns...)

Token Ring was a successful and popular network protocol in the 1980's, and IBM was the major pioneer and vendor of this technology. It is quite possible to find technical information on Token Ring technology and protocols even today, although you are only likely to see actual hardware in the computer museum.

Since Token Ring does have scaling limitations and is hardware intensive, in a setting where TCP/IP and similar contention based access systems were never invented you will have an Internet which is much more limited, concentrated in areas where there is a high degree of existing infrastructure and wealth and certainly unlikely it would spread to relatively young and poor people (it is not clear to me if Token Ring architecture would even be workable on something like a cell phone/smart phone network).

So in your dystopia, rich people and middle and senior management types would be connected to the Internet, and would always be at the mercy of whoever can control the MAU's of their local work networks or the higher level MAU's in the public parts of the network (presumably the phone companies). Network hubs, where large numbers of MAU's are concentrated, would be carefully controlled and protected, since that would be the major weak point of a Token Ring network. "Hacking" would be much different, since the ability to move data is dependent on your machine being able to receive Tokens from other systems on the network, and I imagine it might resemble "phreaking" telephone networks more than todays proliferation of script kiddies, botnets and malware.

It will be interesting to think through the other implications of such a hardware intensive system being the backbone of an alternative Internet. Look forward to seeing what you come up with!

Not the answer you're looking for? Browse other questions tagged technology communication computers internet .

7
End-user experience and prominent use cases of robust interplanetary internet
4
Invention that would supersede The Internet
34
Which current networking protocol would be the optimal choice for very small FTL bandwidth?
7
How in a post nuclear apocalypse setting could a group of survivors set up a "Internet" or "Internet-like" service?
126
Why would characters spend time answering imaginary questions to fictional hypotheticals?
34
Moon base internet functionality
20
How long will your internet content really last, could internet 'archaeology' ever really be a thing?