How critical is it for life that a planet remains within the habitable zone at all times?

Important note: The orbits in the diagram are elliptical. They have low eccentricity so they appear to be off centre circles but they really are ellipses with the star at a focus.

The habitable zone around a star is the range of distances at which a planet which would have liquid water and otherwise be habitable to terrestrial life. However, being closer wouldn't immediately boil the oceans, and being further out wouldn't immediately freeze them. So how far could a planet oscillate to either side of the habitable zone such that it would start warming up again before freezing, and start cooling gown again before cooking any life (flimsy non-extremophile life like us in particular)

I expect the orbital period is probably a significant factor since a longer orbit would mean the time outside the habitable zone would increase for a given eccentricity. 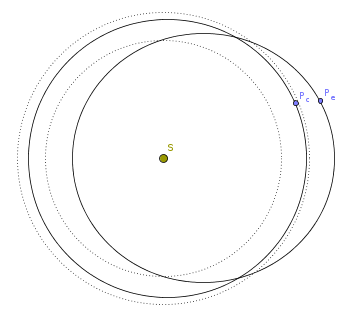 I'm looking for a general function in terms of relevant parameters (Stellar mass and luminosity, etc) rather than a specific answer for a particular star. The planet should be an earth analog (comparable atmosphere, hyprosphere, etc.)

This question has been addressed by a few studies in the past decade. These studies ran climate models for planets with eccentric orbits. I'm aware of three scientific papers on the topic (I'm co-author of one): here, here and here.

The simple answer is: what matters first and foremost is the mean flux received by a planet over the course of its orbit. The orbit-averaged flux $F$ scales with the orbital eccentricity $e$ and semimajor axis a as $F\sim a^{-2} (1-e^2)^{-1/2}$. You need a big eccentricity for it to make a big difference on the climate (e.g., for an eccentricity of 0.5 the increase in orbit-averaged flux is just 15%, easily compensated by increasing the planet's semimajor axis by a smidge): 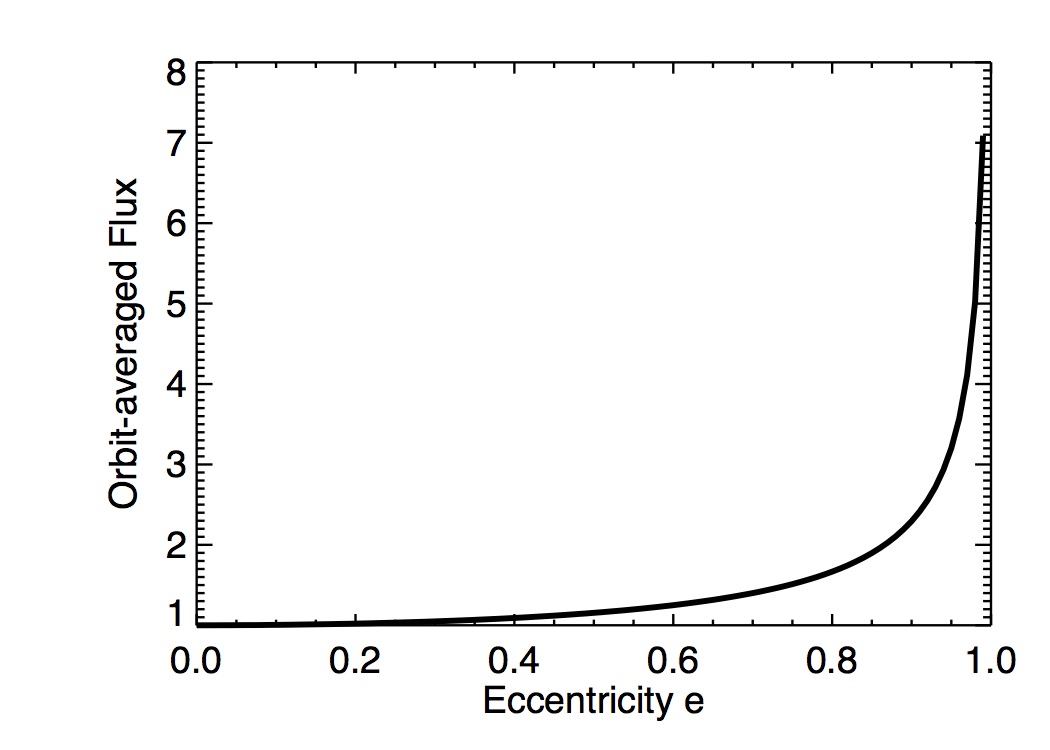 For a planet on an eccentric orbit, there is a short hot summer and a long cold winter. But most of the relevant climatic timescales are much longer than the orbital time so only the orbit-averaged flux matters. This plot shows the orbit-averaged Flux (blue curve), the aphelion to perihlion ratio dmax/dmin (green curve), and the ratio of flux received at peri- vs apo (red curve).

FYI, I once wrote a blog post on exactly this subject: https://planetplanet.net/2014/10/06/real-life-sci-fi-worlds-1-the-eccentric-earth/ and there are plenty of interesting details. My favorite was that we imagined (and performed climate simulations of) a planet on a very stretched-out orbit that was also tilted on its spin axis. The planet ended up being a global iceball except at the point that received the strongest heat pulse from the Sun -- at the South pole in this case, which thawed for about a month per year. Here is an illustration (white = frozen over, blue = just above freezing). 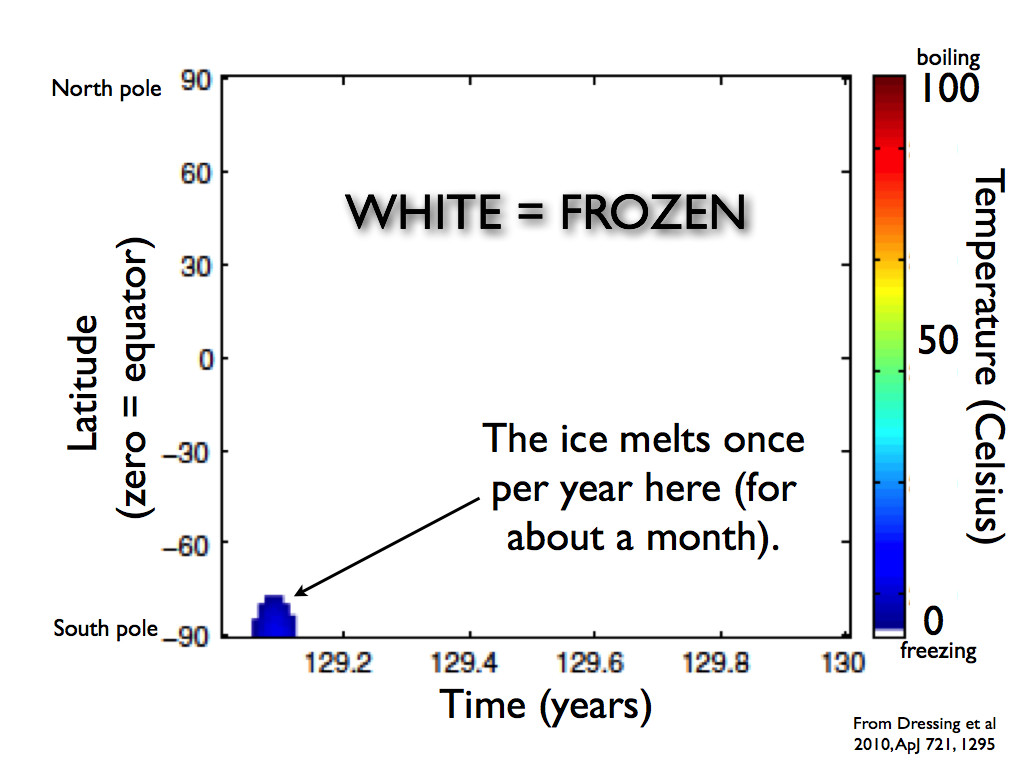 FYI there is another interesting situation in which a planet's orbital eccentricity changes in time due to gravitational interactions with other planets in the system. If you're interested see here: https://planetplanet.net/2014/10/08/real-life-sci-fi-worlds-3-the-oscillating-earth/

On that note, in a simulation of rocky planet formation I once produced a pair of planets that straddled the habitable zone but that exchanged eccentricity such that they took turns having excursions outside the habitable zone. FYI, in this image time 2 is about 20,000 years after time 1 (details on that simulation here or here). 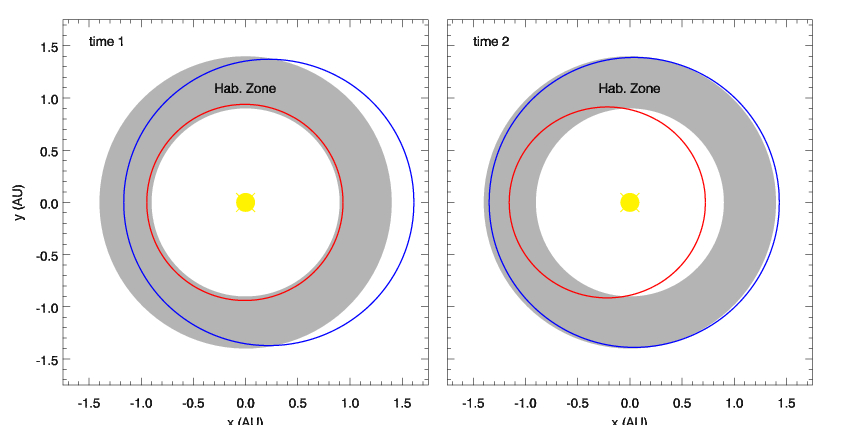 I'm not (at least yet) giving a complete answer, but you need to take into account the following:

The role of an atmosphere is very important. A dense atmosphere causes slower heating and cooling, so the comfort zone is not the same for a Venus-like planet than for a Mars-like planet. Even more if you have greenhouse effect or a very high albedo (or both).

Oceans also are important "pools of heat", keeping the planet a bit cooler or a bit hotter.

Having volcanoes around certainly help during the cold time

Orbital motion is much, much faster if the body is near the star. If the planet must travel the same distance inside the hotter border of the comfort zone as outside the cooler border, the transit on the scorching end will be very, very fast, while the transit through the freezing zone will be very slow. So you can approximate to the star more than you initially thought, since you will be there for a really short time.

It's all about thermal mass.

Ultimately, this question is talking about how long it takes for life to die outside the 'ideal' conditions in which it thrives. As has been described in other answers, there are a wide range of conditions that impact this. Ultimately though, thermal mass is what makes all the difference.

So what is thermal mass?

For the purposes of this answer, we can describe it as any mass which has the ability to absorb and retain heat when its cooler than the environment, leeching it out over an extended period when the mass is warmer than its surroundings.

On Earth, we have the oceans and our atmosphere. The atmosphere retains a lot of heat (thanks to greenhouse gases) and traps it close to the surface. Thing is, the atmosphere is not a particularly good thermal mass. That's why temperature differentials between night and day exist.

That said, water does a much better job. If you live on a coastline, you'll know that the difference between night and day temperatures aren't as large as the difference between night and day further inland, particularly in deserts. Why? Well, the water on the coast retains a lot of the heat through the day and the atmosphere gets the benefit of that on a form of delayed release.

SCUBA Divers will tell you that temperatures in May (Southern Hemisphere) are still quite warm because the summer heat hasn't completely left the water yet.

So; if you have a large amount of water on your planet, you'll fare better than if you don't. Some measure of greenhouse gasses are necessary, but will cause problems when you're too close to the sun. As as been said in other answers, it's the too close part that you'll have the biggest problems with, especially if you have greenhouse gasses in the atmosphere to retain heat. The ocean will help absorb some of that heat, but you'll still want shelter from it during that part of the orbit.

You'd also want a high O2 atmosphere if possible Why? Because you want the extreme sun to produce large amounts of Ozone (O3) during the hot periods to assist with blocking cosmic radiation. Ozone is particularly useful here as a support to the magnetic field of the planet as it's temperature based and is naturally produced when it's needed most; on hot days (in this case closer to the sun)

It's not all good news though. Thermal mass can even out the extremes, but you still need quite diverse life capable of a very wide temperature variation.

Woolly Mammoths (as an example) would overheat in our current climate. Many animals on Earth are adapted to either warm climates or cold climates. Variation (lunar cycles, day/night, seasons, etc.) does drive a lot of the processes that allows life to grow and thrive, but the variations can't be too large otherwise the animal or plant needs concurrent yet contradictory adaptations to survive. Cactii don't do well in tropical climates, for instance. They REALLY don't do well in the arctic. Polar Bears would struggle in Mexico; you get the general idea.

It's possible that your life would find ways around this, and certainly aquatic life is far more possible in this scenario, but that leads to another consideration; ocean currents.

Most ocean life on Earth exists because of underwater currents that have been stabilised for some time. These bring plankton and other creatures through set zones, where larger animals feed on them, where even larger animals feed on them, etc. This creates reliable feeding patterns around the world's oceans, meaning that life specialises in exploiting that pattern and diversity is assured. With the massive temperature variations you're describing, it's possible that those feeding patterns wouldn't occur and the weather would be more chaotic.

One of the reasons that Neptune (for example) seems to have winds ripping over its surface at incredible speed and with no apparent Coriolis effects is that it's so far away from the sun. Very little energy is being introduced into its planetary system, so when the wind starts, there's very little to stop it.

Your planet on the other hand is constantly getting (intermittent) dumps of large amounts of energy into its atmospheric and water stores. That's likely to create all sorts of chaos in the weather, currents etc.

This doesn't make life impossible, but it does make it hard. Food becomes less predictable. Birth rates become lower as a result.

Is life on such a planet possible? Sure, given the right thermal mass considerations. Is life so possible that it's likely intelligent life might evolve? No, I'm afraid not.

We really don't spend a lot of time thinking about it, but we're incredibly lucky to have this planet. It's like winning the lottery hundreds of thousands of times in a row. Even then, conditions are not always (and certainly haven't always been) ideal. On this world you're describing, the chances of intelligent life evolving are reduced by virtue of the fact that life won't thrive quite the way it does on Earth. It might be a reasonable colonisation site, but we not about to meet our equals there I suspect.

On the other hand as the planet approches its nearest point relative to the sun the temperature is likely going to climb and the environment is going change drastically. It is one thing to adapt to a very cold or very warm environment, it is another to have to adapt to both.

A more feasable approach would be a more oval orbit where twice a cycle it spends a short period outside of the habitable zone and its perigee is not so much closer to the sun that the environment is forced to change radically. I would also expect that life is more likely to thrive in subteranean refuges where the changes in temperature at the surface have a negligable impact.

I see some possibilities:

I think that the first one is more likely to develop unless the life developed elsewhere and somehow got to this planet or a close encounter with another planet shifted it's orbit and the life that survived developed.

Not the answer you're looking for? Browse other questions tagged planets science-based biology .

6
Two orbits, Four habitable planets in the goldilocks zone?
12
Two planets in a stable horseshoe orbit?
10
How would this tidally locked planet be affected by its moon and would the moon have a deaccelerated orbit?
9
How can I find out the length of seasons and solar year on this planet?
2
Are these traits for my planet mathematically accurate? Could it support life?
6
Life and Galactic Age: What galactic ages make a planet habitable?
1
Would this planet be habitable for intelligent lifeforms
3
How to Create the Galactic Habitable Zone