Given a billion dollars, build the most visible orbiting satellite possible

As per the title, given

Build and put into orbit a satellite that will have the greatest possible apparent magnitude when seen from the surface of earth.

I am interested both in details about the satellite and estimates of its apparent magnitude.

There is no minimum shining time

The device may be visible for any amount of time, you should maximize the average apparent magnitude. For example, if X works only half of the day but the apparent magnitude is more than double than Y that works all day, X is better.

There is no minimum area to be visible from

It does not matter how concentrated the light is, but if it can be seen from just one 'point' it should be adjustable to fire at other locations.

Monument to the future humans

I intend this light in the sky to be a sign for future humans (or whatever intelligent life will develop) that past space faring lifeforms existed in their planet. So it should last millions of year (I thought all orbits lasted forever, hence the lateness of adding this requirement)

The first problem we have to solve is power: where does the light energy come from? Our options are the same as for every other spacecraft:

The idea of beaming power from a 'generator' satellite in high orbit to a 'lightbulb' satellite in low orbit is a good one which draws on technically plausible concepts. However there are a couple reasons that I'm avoiding it in my design:

Choosing the passive reflector, our initial design looks something like a solar sail.

The next problem is the structure of the spacecraft. Unfortunately the reflector can't be tensioned by centrifugal force like a solar sail, because the rotation would interfere with the pointing (since the reflector is not an isotropic radiator, steerability is a requirement). I envision a folding truss structure like SMAP's antenna (Note that SMAP's budget was around 900 million dollars). The structure doesn't need to be as "dense" since the flatness of the reflector is not as critical.

We can see that this rough estimate has good agreement with the magnitude of Iridium flares, caused by reflective antennas 1–2 meters in size.

Assuming again that the reflector is close to flat, the width of the reflected beam will be around 30-40 arcminutes. The diameter of the beam at the surface will be about one percent of the reflector's altitude (from a 4 km spot in low orbit to a 350 km spot in geosynchronous orbit).

I performed some simulations to determine the optimal altitude. I took into account four factors:

Surprisingly, the simulations indicate that you want the reflector to be in as low an orbit as possible. The decrease in brightness with altitude dominates the increased visibility. However, our orbit can't be too low, since with a large, lightweight structure drag becomes an issue.

Let's spec a 1000 kilometer orbit. At this altitude, even a 100-meter reflector would drop by only about ten kilometers per year. The inclination should be a little higher than the latitude of the northernmost (or southernmost) location you want it to be visible from. The reflector will cast a spot about ten kilometers wide on the Earth's surface.

At 1000 kilometers, we could make the spacecraft as bright as the full moon with a 20-meter reflector. This size is easily within the realm of plausibility; JWST's sunshield is close to this size at 18 meters long.

A metallized mylar balloon or light sail can be amazingly brilliant via reflected sunlight, although it would only be visible when the sun is illuminating it (so from twilight to dawn). If you are satisfied with that, then the builder will happily take the money, pay SpaceX $50 million for the launch and a few million more for the balloon/lightsail and pocket the change.

In terms of "how" brilliant it could be, Nazi scientists (who apparently had nothing better to do with their time) worked out the parameters of an orbital mirror made of sodium which was designed to focus sunlight on hapless targets on the ground (much like a child uses a magnifying glass to burn ants).

Some details can be found here:

Later during World War II, a group of German scientists at the German Army Artillery proving grounds at Hillersleben began to expand on Oberth's idea of creating a superweapon that could utilize the sun's energy. This so-called "sun gun" would be part of a space station 8,200 kilometres (5,100 mi) above Earth. The scientists calculated that a huge reflector, made of metallic sodium and with an area of 9 square kilometres (3.5 sq mi), could produce enough focused heat to make an ocean boil or burn a city.1 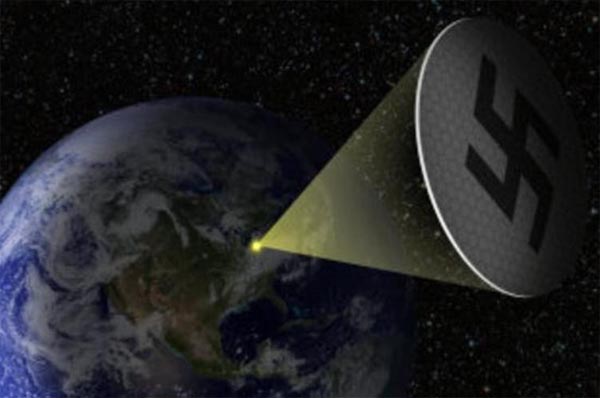 Now to make this visible all the time, use something like the Sonnengewehr in high orbit as a power generator, and beam the energy to a satellite in LEO which has IMAX projection lamps on board. A single IMAX lamp on Earth pointed into space is supposedly visible on the Moon:

The lamphouse on top of the IMAX projector utilizes two 15,000-watt liquid-cooled, short-arc xenon lamps. The lamps weigh 10 pounds each, and are nearly two feet in length. Costing more than $6,000 each, the lamps have a life expectancy of only about 1,200 hours of operation and are replaced 4 times per year. Because of the extreme high-pressure xenon gas inside the quartz glass envelope of the lamp, projectionists must wear ballistic safety gear when changing out a lamp. If dropped, the xenon lamp would explode with the destructive force of a hand grenade.

The average luminance of one of these xenon lamps is approximately 1.6 billion candles per square yard--about equal to that of the Sun as viewed from the Earth's surface! The lamp has a light output of approximately 600,000 lumens. NASA uses this same type of lamp at the Kennedy Space Center to illuminate the Space Shuttle at night on the launching pad.

During normal operation, the clear quartz glass envelope of the lamp has a surface temperature of about 1,300 degrees. To prevent the lamp from overheating, it has coolant "jackets" that allow cool distilled water to be pumped around the electrodes at the flow rate of 8 gallons per minute and a pressure rate of 100 psi. In addition, an exhaust fan removes 1,200 cubic feet of air per minute from the lamphouse. The xenon lamps operate at 37.5 volts DC, and 400 amperes of current. 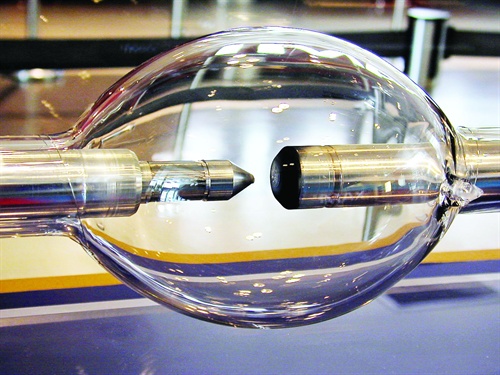 So if we take 50 million/launch from SpaceX (X2), use 100 million to build a solar power station in high orbit with a microwave energy beam then we have 800 million left to purchase IMAX bulbs and build the satellite. (Lets put aside 100 million for the satellite body). So we can use 700 million to buy IMAX light bulbs, for a total of 166,666 bulbs. This will produce 99999600000 lumens of illumination until the bulbs start burning out.

I'm pretty sure you might need sunglasses to look at it from the Earth's surface. (Use SPF 100 sunscreen as well.....)

A square kilometer of metallized PET is available at retail prices for about \$4 million, and at a density of 1.4 grams per cubic centimeter, weighs about 71000 kilograms. SpaceX can put that into low orbit for around \$330 million.

For \$1 billion, you get 16 Falcon 9 launches, putting three square kilometers of highly-reflective material into orbit. At an altitude of around 200 kilometers, it will have an angular diameter of 34 minutes of arc, slightly larger than that of the Moon, but it will be much brighter, with an albedo close to 1 (in contrast to the Moon's graphite-dark 0.13). With careful angling of the surface, it will be visible day or night, only disappearing when it enters the Earth's shadow; a 10% reduction in size will let you put it in polar orbit, making it visible at all times.

Overall brightness will be around -14 (compare the full Moon at -12), flaring to around -27 (the same as the Sun) when the angle is right for it to focus sunlight somewhere.

A nuclear shaped charge aimed at specific point should do the trick.

Nuke shaped charges are an idea invented in the 1960s to improve the efficiency of projects like Project Orion. Instead of a spherical blast produced by conventional nukes, where much of the energy from the explosion would uselessly radiate away, nuclear shaped charges focused the energy into a relatively small area, namely the pusher plate of a Project Orion spacecraft.

The brightness from a blast like this is very short, a few seconds at the most. In order to meet the "fire at different locations" requirement, the spacecraft will require multiple charges be deployed into orbit.

How to spend the billion

Conventional explosives don't pack the punch required to make a really bright new "star". Fission charges may provide the power necessary but if going fission, go fusion and pick up another two to three orders of magnitude in power output without too much more weight. The most powerful US nuclear weapon was the B-41 with a yield-to-weight ratio of 5.1 megatons per ton. Note that the Russians did make a 50 megaton fusion weapon at 27,000 kilograms (60,000 lb) for a yield-to-weight ratio of 1.6.

Project Rho reports that the minimum aiming angle for these shaped charges is 0.1 radians all the way up to 0.39 radians (6 degrees to 22 degrees). The angle depends on the material in front of the charge as well as the thickness of the plate.

The only other place to find energy yield greater than fusion weapons is to use anti-matter reactions, but those aren't available in the budget provided. Large solar energy concentrators may be available in the time and budget allocated, but no one has launched anything approximating a solar lens larger than 1 km².

Not the answer you're looking for? Browse other questions tagged space economy hard-science or ask your own question.

22
Motivations for interstellar colonizations
4
What mix of corporate structures (out of the 4 given) would be most efficient for a galaxy-wide corporate conglomerate?
12
Man-portable anti-satellite weapon
29
Can a planet have a day that's always longer than night?
3
How wide should be the most possible visual spectrum for an organic eye?