In my setting, military innovation spurred by the American Civil War (1861-1865) prompts the design and construction of counterweight-driven skyhooks for the delivery of suborbital long-range munitions.

The devices, nicknamed "Tennessee Slingshots," are used to bombard Charleston and Vicksburg with barrages of small bombs with parabolic transatmospheric trajectories. The bombs are poorly aimed, and don't ultimately contribute in any significant military way to the more focused destruction wrought by heavy mortars and traditional artillery. But the relatively modestly-sized Tennessee Slingshots excite scientific and engineering interest in the possibilities of space exploration, given that the objects launched by these skyhooks are the first man-made artifacts to exit the lower reaches of the Earth's atmosphere.

After the war, continued engineering improvements lead to a decision to invest in a massive public works project - a huge space city that takes advantage of the rugged terrain of Mexico's Barrancas del Cobre. The fact that this canyon system in the western Sierra Madres is relatively close to the equator means that it's possible to take advantage of the Earth's rotational momentum, and the depth of the canyon means that the height differential allows for the construction of a number of experimental counterweight-driven skyhooks of larger and larger size.

Ultimately, a great chunk of mountain is excavated and fashioned into a massive half-million-ton counterweight on angled tracks, tethered by massive iron cables to elaborate transmission-works that translate the mechanical movement of the counterweights into the the supersonic movement of a tracked launch assembly that runs up the side of a mountain and continues on a slender rail supported by towers high into the air.

The gear ratio is such that as the counterweight slides three or four miles down a steep slide into a water pool, a looped cable is accelerated along a twenty-mile track until an object carried in a sled on the track is traveling fast enough to achieve escape velocity.

Upon reelection (following the intervening term of his rival Benjamin Harrison), Grover Cleveland announces at his inaugural address that he will authorize funds and support the goal of the Mexican-American Aeronautic Corporation to safely launch a man into orbit and retrieve that aeronaut by the end of the decade.

Is this effort doomed to fail? Could late-19th century engineers have successfully built such a skyhook, or are the available materials and technology not up to the task? Would massive iron chains snap like taffy under the strain, or would friction cause the whole building-sized gear assembly to melt and disintegrate? I'm trying to conceive of a mechanical orbital delivery system that would not rely on concussive chemical acceleration - the lead engineer would at least be aware that you can't shoot people out of a cannon - hence the long acceleration track and geared transmission. And I want to limit myself more-or-less scrupulously to the industrial and scientific capacity of the 1880s, without resort to hand-waving, anachronistic developments, or pure balonium.

Can you even go suborbital?

Assuming a spherical iron projectile at 2000 kg, we can use a simplified atmospheric model combined with the drag equation to find an estimate for the required staring velocity to reach an altitude of 100 km, the Karman line.

6000 km/h is the number. That is six times faster than a projectile fired from a high velocity artillery cannon.

Accelerating up to that velocity at 10 g is going to take a 14 km long track.

But that is just suborbital…

The problem with an orbital launch is that you have to give the spacecraft a horizontal velocity in order to reach orbit, and that means that the projectile must travel pretty much horizontal from the beginning because it does not have its own propulsion system. The minimum velocity needed is 28000 km/h, and that is even before you start to compensate for drag. Your trajectory is going to look something like this: 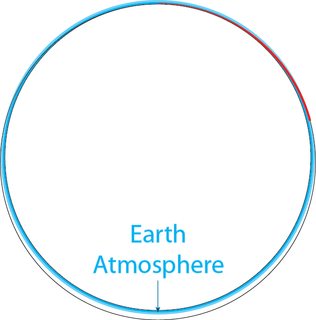 Note how almost a quarter of it is inside the atmosphere. Ever tried to run through a swimming pool? Imagine doing the same, but at over 30000 km/s from North America to Africa. Also, it is easy to see that after one orbit you end up back at the launch site if you can not raise our apoapsis by the use of something like a primitive gunpowder rocket.

That makes a required 10 g launch track of at least a length of 1000 km. You can of course go further than that, and analyse compression heating, wire stress, etc., but I think that this is enough to say that it can simply not be done.

When launching from something based on the surface, all the required velocity must by provided in the beginning. That makes losses due to drag ridiculously high.

In addition to the drag problem that Hohmannfan addressed there's also the problem that your device can't put anything in orbit, period. Orbital mechanics 101: Your orbit will intersect the location of the end of your last burn.

While you aren't using a burn per se the same thing applies here. Your orbit intersects the end of your catapult. Unless you can somehow make the release point exoatmospheric (something we just might be able to do today, certainly not then) your "orbit" comes back down, you don't stay in orbit.

There are excellent reasons given in other answers about why getting into orbit will be difficult, but even if you find a way to overcome them all, you still have the second half of the problem to contend with:

to safely launch a man into orbit and retrieve that aeronaut

Assuming you are talking about actually orbiting the earth as opposed to just going above the atmosphere and back down in a balloon, then even in low earth orbit, your satellite will need to be traveling about 7.8km/s (about 17500mph). To return from space, you will need to slow down. To use the atmosphere to slow from that speed generates an extraordinary amount of heat. Bearing in mind that the laws of thermodynamics were still being argued over, and material science had yet to be invented, the sort of heat shields you would need to survive simply could not be made at that time, so your only option is some sort of rocket powerful enough to reduce your speed sufficiently that you would not need to use aero-braking.

All is not lost though, as rockets were pretty well known then and developing a super-efficient rocket fuel is not beyond the possibilities of the time such as a slow burning TNT. The combination of the two technologies could possibly achieve your goals. A trebuchet type mechanism to throw your satellite from the top of a mountain above the thickest part of the atmosphere (at least a mile, preferably more than 5 miles) where a rocket motor ignites to push you into orbit. More rockets are fired to slow you down almost to only a few hundred miles an hour as you drop to a final landing probably by parachute as gliders were only in the process of being invented in your timeline.

I suspect that while you could transfer enough momentum with a version of the set up you've described it would actually shatter any projectile you tried to launch; the acceleration track is relatively short and it's at low altitude where atmospheric friction is at it's greatest. Snatching up a multi-ton object from rest against it's own inertia up to escape velocity in the space of a few seconds is going to create/require stunning forces, far in excess of the material strength of most modern alloys, doing it to late 19th century metals is going to be disastrous. That's before we get into discussions of how this doesn't work because of orbital mechanics or the difficulties of retrieving an object that doesn't have any form of motor of it's own. Even if you can somehow handwave a system that works for getting payloads orbital you also have to provide a situation in which you can support the logistical effort to supply those payloads, I'm not sure that the economy of post-civil-war USA is up to the task.

Not the answer you're looking for? Browse other questions tagged science-based space-travel alternate-history spaceships or ask your own question.

6
Could a 19th century space gun be of any use today in space exploration?
3
Cheaper, Faster, Better Housing
3
How fast could Earth rotate and continue to support life?
1
Reducing human military capability
6
Cost and efficiency of naval vs railway transport in mid-19th century
9
Could people of the 14th century create an inline engine for use in aircraft and vehicles?
9
Would this “self driving” car work?