How would dragons, griffins, and thunderbirds affect travel and trade?

It is medieval times, and mythical creatures aren't so mythical. About half of all mountain lions are griffins, which use their wings to glide over rough terrain. Dragons dwell on mountain peaks, or in deep caves. (There are sea serpents,but they are very rare, so they don't really matter). And thunderbirds ride in on oncoming storms.

Dragons feed off of pretty much anything, and they range far and wide. Their body is anywhere from the size of a komodo dragon to a buffalo (not counting their tails and wings).

My previous question about thunderbirds.

My previous question about griffins. 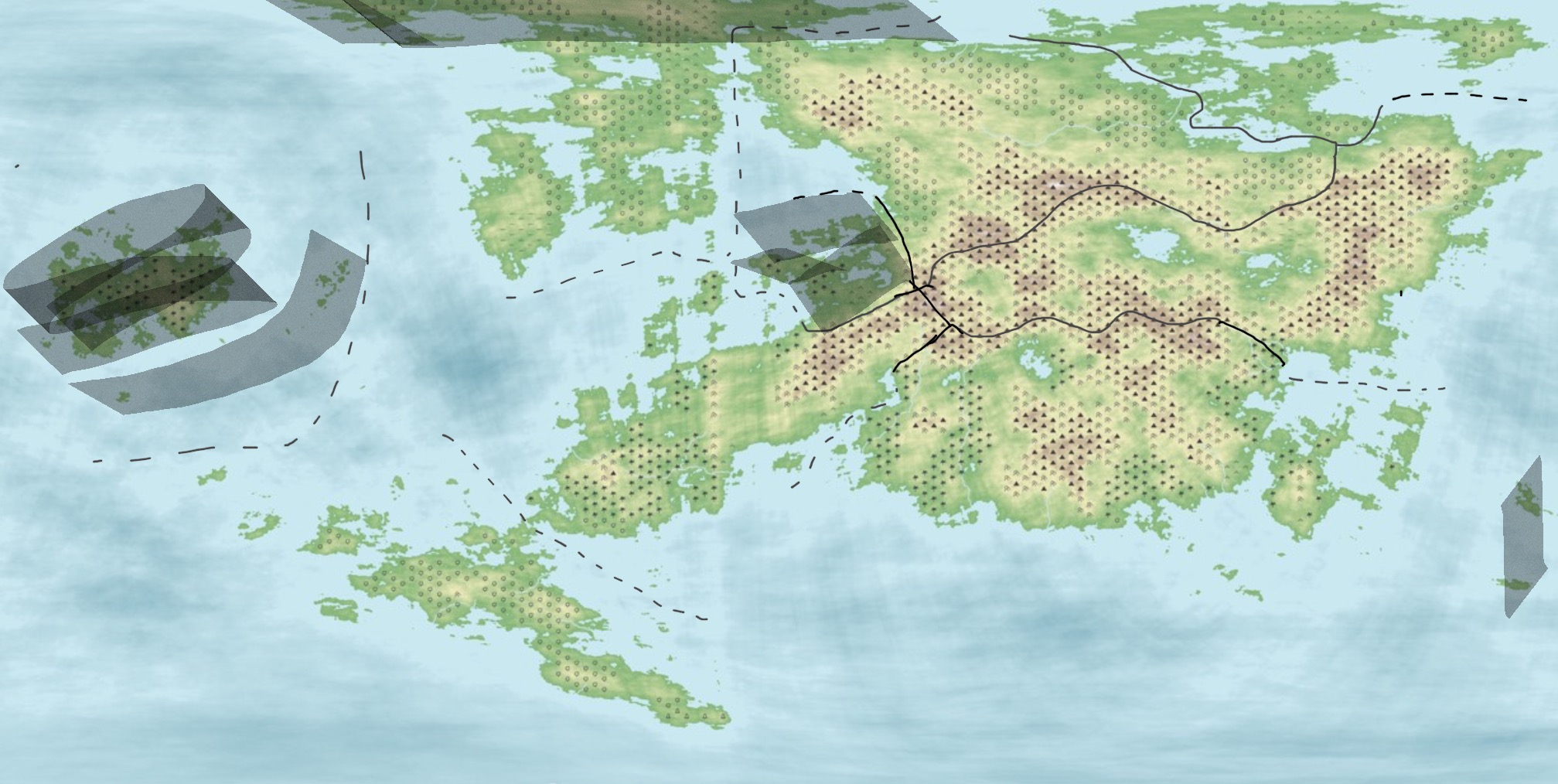 Note - The areas that are shaded are not part of any country for a variety of reasons. Travel through the shaded swamp is impossible. The outlined areas are the different countries. The entire map is about the size of North America, and I haven't gotten around to cities yet. (Forgive the messiness of the shading and lines, I did it on my iPad.)

Given that these creatures exist in a medieval setting, how would trade between the countries above be affected?

Well, if they had tame dragons they could speed up travel so increase trade speed and make much quicker cross ocean travel. Otherwise I can't see how trade would be affected. The human traders would travel in large groups and some would probably be armed in dangerous areas such as mountains anyway in case of bandits or mountain lions. These groups would be large enough to scare off or drive off griffins. The traders wouldn't be stupid enough to travel through storms and if they did go through a storm the weather would be more dangerous than thunderbirds.The dragons would be the only threat and trade routes would go around areas they live/hunt in although if these are mountain peaks people wouldn't cross it anyway but would go around..

Trade would be the same as through any wild lands.

Trade caravans would include a contingent of guards that are trained to deal (or gained experience dealing) with the local fauna. The creatures would likely learn to avoid humans after a few encounters. As the humans advance and build kingdoms then hunting parties would likely be paid to clear out dangerous creatures and open additional trading routes.

I don't see trade been affected been affected that much. In our world stories of monsters abounded. Locations were monsters are believed to live or hunt were marked on maps ( here be dragons). People Crossing long stretches of territory would avoid these areas. In your world the same thing happens only the monsters are real.

As people would already be aware of the creatures, they would pretty much be aware and also, would have designed tech or strategies for dealing (and/or) combating with them too.

For example, dragons exist in the Harry Potter world, and they are portrayed as dangerous as they are, in most other classics and mythological works. However, the people there have learnt to tame them, and some, in fact, learnt to use them for regular purposes. For example, the owls and birds for mail, etc.

So, they wouldn't affect trade as much as we would expect. These would be my reasons why:

Having said that, I would still argue that people would be able to tame them, and in fact, train them to make trade easier and faster.

Not the answer you're looking for? Browse other questions tagged economy mythical-creatures .

193
How could dragons be explained without magic?
57
FTL travel is impossible. How is interstellar trade possible?
7
If thunderbirds were real, how would it affect shepherds and ranchers?
4
If mountain lions were Griffins, how would it affect other animals?
6
Biological and ecological considerations for a giant worm
8
Are my wing-walking griffins viable?
11
Viability of Scansoriopterygid wyverns
4
How would medieval people go about slaying gryphons?
5
How would griffins collect materials for their nests?