Could a planet have an atmosphere that is composed mostly of Diborane, Nitrogen, and Ammonia Vapor?

Ammonia could also be an alternative to water as a solvent for Extra-Terrestrial life as it is also a polar molecule that in liquid form is capable of dissolving a variety of substances including organic substances.

Even at the temperature of Liquid Ammonia Diborane is a gas meaning that it could get into the atmosphere of a planet that has high concentrations of it.

The only problem for Boron-Nitride being a building block for Extra-Terrestrial life is that Boron is very rare.

Nitrogen and ammonia? No problem.

Diborane? Not so easy. The problem is, diborane has a positive enthalpy of formation. That means that it prefer to remain as boron and hydrogen separately. Despite that, it is less reactive than you would expect. Furthermore your atmosphere has a compatibility issue, diborane reacts with ammonia to form the diammoniate salt.

On the other hand, the planet in question has life, and that is important, as such places tend to not be in thermodynamic equilibrium. We do for instance have large amounts of flammable material combined with an atmosphere containing oxygen. If some process on the surface constantly release new diborane to the atmosphere it is not going to be a problem.

As for the colour of the sky, things start off normal with ammonia and nitrogen: Transparent with white clouds. I had a hard time trying to find spectral data for diborane, but I found a lot of images showing nice, green flames: 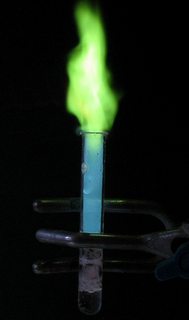 Probably not hundred percent accurate, but I like to imagine an atmosphere with a weak green glow.

6
Geography and Appearance of an nitrogen/ammonia planet
6
The Great Deoxygenation Event
3
Would an atmosphere of supercritical CO2 affect available light?
4
Need some help in creating silicon life in cold temperatures
11
Would A Biological "Cold Haber" Process Deplete an H2/N2 World of its H2 or N2?
5
Life-supporting climate for an organolithium planetary environment?
9
How could formamide lakes form on an exoplanet?
1
What size/distance a planet should be from its star to have a dense atmosphere and not become a gas giant?
2
Is it possible for an ammonia planet to have a desert spot? Like the great red spot on Jupiter. Or can an ammonia planet never have any hot spots?
9
Is this a breathable atmosphere for human-like aliens that have more efficient oxygen-carrying blood? Normal humans would require a gas mask (oxygen)