How would a person who is a snake from the waist down move around?

By that I mean someone who looks roughly like this: 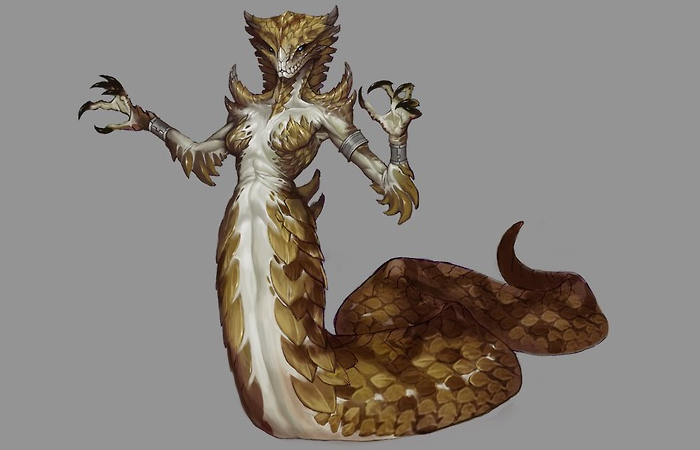 (Note: the name that is increasingly common to associate with this kind of creature is Lamia. The mythical Lamia carried around a snake skin, but was not part snake herself)

Snakes have four different ways of moving around, as described here:

Let's assume that all the organs for digestion and reproduction are in roughly the same place as they are with humans (don't ask me how they'd use a toilet though). This means that everything below the genetalia is essentially one big mass of muscle. Fun fact: this means that such a snake person has a bigger tail-to-body ratio than an actual snake. This creature will have to hold up its torso, hips and enough of its body so that it is of average human height, and has to propel itself fowards with the rest of its body. Which of these four ways would be the best for a snake person like above?

I am looking for the way that has the best ratio of speed VS the strain put on its body. Would one of the four above options work out? Or would it require another form of movement?

My guess is that it would use all four types of movement, depending on terrain; however, it would likely use serpentine movement the most.

With that in mind, I expect a snake-person as you described to usually move along solid ground with a serpentine motion, sidewinding on unstable or slippery ground, using the caterpillar movement to stalk prey, and finally using concertina to climb or traverse difficult/unstable ground.

The fastest, most efficient means of locomotion for a serpentine being is for it to roll itself into a hoop and roll around like a wheel. It can provide propulsive effort by flattening the loop slightly similar to a caterpillar track and flexing and extending its body in the appropriate way, or it can form a perfect circle and take advantage of inertia to keep it moving. It can steer by flexing its body from side to side, and could conceivably turn in little more than its own diameter.

It could be expected that on level ground, such a being using this method of locomotion could easily outpace and outdistance any creature using a method of locomotion that involves reciprocating limbs or any other variety of serpentine locomotion. It could conceivably keep pace with some slower or even medium-speed birds. A speed of 100kph sustained for over an hour or more is not inconceivable, but this would be approaching a maximum practical speed.

This is all well and good in theory, however there are also a few potential drawbacks:

Still, despite all these limitations and problems, if they could be overcome, it would change lamiae from a slow, lumbering species with poor endurance to the fastest, longest-distance cursorial species the world has yet seen, humans included.

Not the answer you're looking for? Browse other questions tagged reality-check mythical-creatures .

19
Anatomically Correct Naga
4
World where humans have high competition
1
Could a creature use its tail to move on land?