What would Earth's seasons be like if the planet was rotating along a different axis?

Right now the Earth rotates around the y-axis so East and West replace one another. What would the affect be on Earth's seasons if it rotated on either other axis?

The first is the Z axis, pointing from Earth to the sun so that South and North swap places by going through East and West. The second option is the X axis, a tangent on Earth's orbit. This has North and South flipping over the Equator.

Your Z-axis and X-axis are actually the same, the axis of the Earth stay fixed in space while Earth orbits the Sun, resulting in an alternating pattern.

Illustration of the Sun's motion across the sky:

In other news, the magnetic field is screwed up, so we are going to have aurora and cancer everywhere.

Tilting the Earth's axis by 90 degrees will have the same effect on the climate as Uranus, with alternating poles having extended "summers" and "winters" while the equator will be in twilight during this time. In the "spring" and "fall", the poles will be dark while the equatorial regions will be in sunlight. 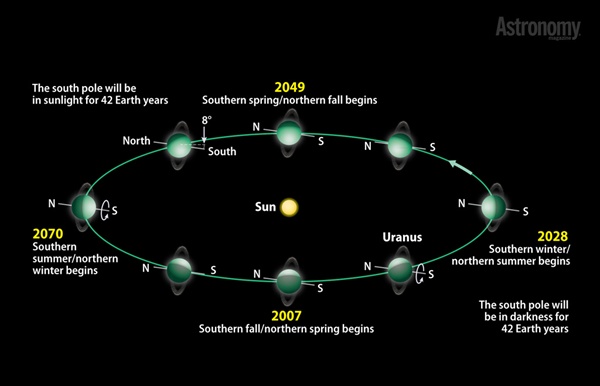 Overall, because of the size and orbital period of the Earth, I think this will suppress the formation of ice caps and polar regions. Since there will be sunlight 3/4 of the year striking both poles, the period of total darkness will be rather short, and the Earth's atmosphere and oceanic currents will probably provide enough heat to keep the region simply covered in snow rather than ice caps.

The other two answers address the "rolling" scenario quite well, but I'd like to point out one glaring error you made in your reasoning: the Earth isn't rotating along the Y-axis. It's rotating on an angle.

Now, of course, you know that. But the important point is that this causes the seasons. If Earth was rotating exactly around the Y-axis (with respect to the orbital plane), there would be no difference in climate due to orbital position.

As you let the rotation axis fall away from the Y-axis, you get more and more seasonal weather, up to the point where the rotation is aligned with the orbital plane (it doesn't matter in which direction - that's just an offset to when each season starts, but the effect is the same).

For additional points, changing the rotation rate can give you more to work with. If a day takes half a year, it's going to have a huge effect on the seasonal variations - it might be interesting to explore a scenario where the rotation is a bit more tilted and slowed down. Venusian weather and climate is pretty interesting, in part due to its slow rotation and massive atmosphere; while the planet's day is longer than its year, the clouds make the trip around in measly four Earth days.

I guess life would be pretty much constrained to the equator regions. However, during the periods when the poles points towards the sun, the very hot sunward climate will very violently clash with the very cold climate on the other hemisphere. This is unlike the current polar climates - while we currently (in real life) also have a six-moth summer period at each pole, the shallow angle at which the sun provides heat and illumination is about nothing compared to the situation where the pole points directly at the sun. Imagine tropical climate there, but not for half a day with a cooldown in the night, but with heat building up increasingly for several months.

6
Seasonal progression for an Earth-like planet with wobbly axis tilt?
7
What would a world with a 45 degree axial tilt look like
0
ELEVEN Inner Planets?! What Will the Ice Ages Be Like?
3
Medieval/ancient/fantasy setting in southern hemisphere?
6
At What Point Does a World's Twin Planet Disappear, from the Viewer's Perspective?
4
An alternative way to rotate or in this case rolltate
1
The Effects of gravity on humans and animals on a world 4x the size of Earth
2
Life in the Temperate Zone of an Alternate Earth with an Axial Tilt of 42 Degrees--What Would the Seasons Be?
2
Would an O'Neill Colony in earth orbit need to rotate around an axis parallel to the Earth to keep people from feeling major weight changes?
3
Length of months in Europa