Could complex, macroscopic life arise and exist without cells?

For the purposes of this question only, I am making the following definitions:

Everything on Earth that is unambiguously alive today is composed of cells, from unicellular microbes to large creatures with hundreds of trillions of cells.

I am curious about the possibility of non-cellular life. Could life exist without cells?

Let me start with an obligatory reference to one of the great worldbuilders of Science Fiction: Hal Clement. In Needle the alien visitor was a hard-SF take on the classic “blob”. It was explained that rather than being descendant from life using cells, it came from viruses, or something like that.

Note that researches work with “cell-free” cultures, which is basically the gunk from inside a large number of cells but without walls cutting it up into little compartments. (Unfortunately Google doesn’t turn up any popular articles explaining that; only scientific papers using them and products aimed at keeping them.)

Some “compartments"” in nature are not microscopic. Look at algae in particular. 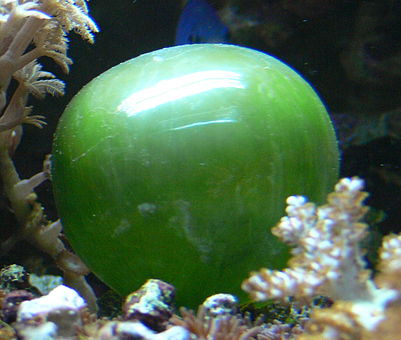 Valonia ventricosa, a species of algae with a diameter that ranges typically from 1 to 4 centimetres (0.39 to 1.57 in) is among the largest unicellular species

However, you asked about complex.

Eukaryote cells can have features like cilla and internal organelles by diving up the cell with more internal membranes. A cell that’s large in one dimension, like a muscle cell or nerve, can have multiple nuclei.

So what’s the difference between a large cell and a bunch of cells? Perhaps the distinction is less clear if the contents can move between them more easily and partitions can come and go. But it will still be like multi-cells because it couldn't have a single nucleus controlling everything. It would still have a high degree of unit-ness even if boundaries are fluid.

nigel222 points out that a plasmodial slime mold is exactly this: a single membrane without walls. This supercell is known biologically as a synctium or Coenocyte (depending on how it formed) and is essentially a bag of cytoplasm containing thousands of nuclei. Follow the links to those terms for more about your subject of interest here. 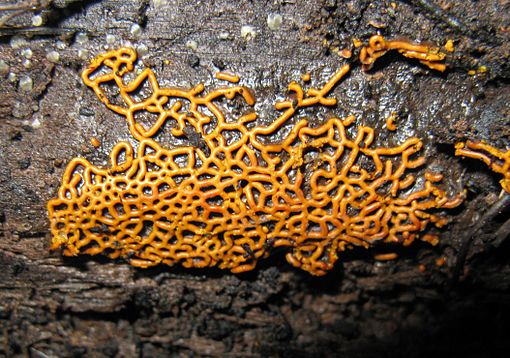 You might look at The SETI weekly Colloquium on Power laws, predictable evolution, and the limits of life. On one slide he shows that “things change” when limits are reached, and a higher level of organization is needed to make progress. This includes the boundary between simple bag-like cells and those with complex internal organization, and again with the largest of those and multi-cellular life.

So limits will need to be overcome at a particular size. Could nature find a different way? Multi-cellular life was an easy solution since cells divide anyway: just stick around and cooperate to greater degrees. But understanding what the issues are with growing and maintaining itself with respect to energy and resources, you might find an idea to inspire a different solution that can be plausible in a good SF story.

What if the basic building block of an alien form of life developed on the outside of its basic structure instead of the inside?

Cells use membranes to contain all the 'stuff' floating around inside them, but proteins can 'stick' to the outside of two-dimensional surfaces and in some circumstances move along those surfaces. This might actually be just as efficient a means of initiating life; less freedom to move around, but because they are locked to a 2-d surface they have a greater probability of proteins colliding, interacting, and forming new exotic structures.

You might end up with a world where life's basic components are 'inside-out' compared to cells, shaped like protein strings or webs instead of enclosed blobs. All proteins would move along these strings instead of floating around in a liquid medium.

Life on such a world would probably look and behave very, very differently. All life on Earth operates according to the basic assumption of forming a barrier against the outside world. Life on this alien world might be more prone to forming connections with other organisms instead of keeping them out and might eventually evolve into a single planet-spanning organism.

It may depend on the meaning of "macroscopic".

If you leave large unicellular organisms evolving for a long time, they may develop a certain level of complexity by developing organelles or other structures inside the cell. That may do what you want/need.

In fact, taking a gas giant (a high-pressure environment where, at the right altitude, some gases are thought to be near-solid), you may find the perfect place for complex unicellular life to evolve.

If such complex unicellular life is taken from its environment and manages to survive (say, being transported by an alien species from its gas giant and into a high-pressure rocky planet), they may even develop sentience by contact with a more manageable environment (not only made of near-solid gas).

Taking the suggestion of organelles/structures developing on the outside of a "mebrane" as mentioned above in a slightly different direction, what about a lifeform where nuclei attach and move along fibres or similar internal structures, and perhaps these structures could later evolve to take on functions of a kind of skeleton or even a muscle?

Imagine a lifeform like the slimemold above, where it contains a number of fibres, and as it approaches some kind of obstacle, enemy or food source, it can "transport" nuclei or even mitochondria-like organelles into the direction of that "encounter" in order to process, (chemically) fight, or digest whatever it is meeting. Once that is done, the organelles or neuclei (or indeed whatever structure is hypothetically possible) can be moved to other places, or just be spread about evenly according to osmosis-like regulation.

The issue with such internal fibres or structures of course, is that they would restrict the organism's plasticity, so they might have to take on a fixed form. You could either work with that, making them growing like a tree would, with fixed branches, etc., or you could argue that even these skeleton-like fibres can be spliced and/or reassembled again according to need.

The entire organism would be encased in a membrane or wall depending on its evolutionary niche.

Obviously, all of this might be incredibly improbable, but it seems at the very least plausible to me.

Maybe. You can imagine a planet that started with an alikaline, rather than acidic environment, specifically alikaline by the mineral kind, not the ammonia kind. Amines and imines are not very stable when treated with a base, and certain that quaternary amines, or the choline that makes up earth like cell membranes will not be able to be synthesized, let alone to form naturally within such environments. What you get then is a planet that was stuck in a RNA world, which that sugars are more available than fats or hydrocarbons.

Whatever life you get will be assembled RNA or proteins that forms rigid, atomically perfect structures that resembles more like viruses than cells, crystals instead of flesh. DNA origami is a useful approach for nanotechnology today, and I certainly don’t see that if living organisms can not be designed out of it. Protein binds nuclei acids, therefore you get all the different effector tools, ribosomes are made of rna that binds protein or dna readily.

Build a scaffold of intertwined RNA or proteins(RNA resembles DNA a lot) that forms repeating, or crystalline structures, then you get a nanofactory. That can potentially make copies of itself. DNA can make DNA, RNA can make RNA and RNA can make proteins, therefore the minimal requirement for life is really just to keep the central dogma going.

We then throw in some form of nanoassembling, which is very common in all living organisms(flagellar motor in microbes, or nuclear pore assembly), then we just get a multi-particular viral "organism" that work just as well as the cells on earth, is not better. After all, all known function of cell membrane transport are based on proteins, with the few exception that is the diffusion of a few gasses, or unwanted toxins.

Therefore, we can’t rule out a substitution made with proteins that specialize(on such jobs). Evolution of such life, if it is evolved at all, would likely happen within geodes or fissures, where concentration difference drives the crystallization process, forming the first crystalline "particles" which would become the building block of all other, higher form of life.

Interestingly, such RNA based lifeforms have a much higher chance of evolving larger individually, rather than forming an analog or what we called "multicellular organisms". Clockwork based high order computations, or "minds" are more likely to be present as opposed to the electrochemical processes that makes up animal brains. (you can avoid pesky errors when your manufacturing is atomically perfect, therefore having no place for an error at all).

Expect to see a lot of "tick tok" creatures around on such planets. Also, ribozymes are not prized for it’s ability to make energy, so expect to see thermodynamics as a prevailing work around, complete with all naturally evolved steam engines(as a replacement for photosynthesis) and a lot of giant analogs of enzymes or other biomolecules. (Anyone want a mechanical dinosaur that runs on steam, or a fully living, sentient robot made of plastic?) you can make this a steampunk/clockpunk or macromolecular world or location for your potential protagonists, even complete with things like a molecular sword or purely mechanical mounts to be discovered.

It all depends on degree of complexity required in your unicellular life-form.

As already pointed out we already have "huge" (several centimeters or more) unicellular living forms.

In our line of evolution cell membrane is an essential component of any complex organism because it specializes in several essential functions (e.g.: signal transmission, pinocytosis, active transport, etc.) which are difficult to imagine in a single cell.

As dimensions and complexity grows need arises for specialized means to transport "materials" across the organism and to process it. In our evolution line this is accomplished specializing cells to form blood vessels, intestine, lungs, kidneys, etc. in an unicellular body all these functions would have to be performed somehow by internal organelles, which may be possible, but surely not easy or likely. It would also be debatable if this "megacell" divided in thousand of sections, each devoted to a function, can really be considered a single cell.

In general a single cell is so because it has a single copy of the genetic code (syncytia are not considered a single cell, but multiple cells without separating membrane as they have multiple nuclei); it is not easy to understand how a single copy could suffice when dimensions and complexity grows.

Not the answer you're looking for? Browse other questions tagged reality-check biology xenobiology .

41
A three foot cell?
11
How would an earth-like planet with a habitable moon work and how to get there?
2
Giant man-eating germs!
3
Alternatives to cellular carbon based lifeforms

20
Is it possible for complex life to evolve on planets without oxygen?
6
Consequences of a two-dimensional universe on cells and life
6
Would complex life evolve on this planet, and could humans survive on it without much outside help?
8
How plausible is my monster?
3
Could complex life evolve after planetary catastrophe in just 120 million years?
7
How Could A Very Complex Language Arise?
5
Could life arise using iron pentacarbonyl as a solvant?
2
Could complex Precambrian life be possible?
0
Could a plant have soft cells?