A Larger Venus in Our Solar System [closed]

Related to If Mars Were a Superearth

In terms of diameter and mass, Venus is one step close to identical to Earth.

But in this scenario, Venus is actually the size of the one exoplanet that astronomers had been calling a "Super-Venus"--Gliese 832c. 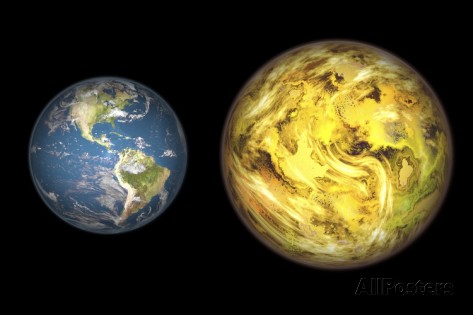 The mass of the planet varies between 5.5 and 10.4 times higher than Earth's. Unlike the previous planet enlargement question, which put Kepler-10b 225 million miles away from Earth, this super-rock is considerably closer to Earth--almost 27 million miles away. So if the planet Venus were enlarged to the size of Gliese 832c, would it affect Earth's orbit in any way? What would the nightscape look like with a larger Venus?

It would perturb the orbit a bit but not enough to change much. i.e. the change would be calculatable but would not change the weather or seasons enough to matter.

Phosphorous and Heosphoros$^1$ would be brighter and would be visible later and earlier respectively. Making them even more important in mythology and popular culture. If it were big enough to be seen as a disk heliocentrism would have had better traction earlier. Unfortunately, it would just be marginally brighter.

Calculating the exact outcome is the n body problem for n = 9 or thereabouts. (I'm counting the sun but not Pluto.) Solving it is too broad to answer.

Follow-up: John, I see several problems with many of your questions. I'll try to explain, and I hope the others will bear with me for an answer which goes way beyond the original question ...

Some scientific problems can be solved by "solving the equations." One example is the movement of two objects in orbit around each other, e.g. a planet orbiting a sun. (Actually both orbit around their common center of gravity. A slight wobble for the sun, while the planet circles the sun.) This is known as the two-body problem.

For many other problems there are no equations, or they cannot be solved. What is possible is to take initial situation at some point in time and calculate a very good approximation for the situation one "time step" later. The problem with this is that a "very good approximation" isn't the exact answer, and the errors will add up over time.

Another issue with some types of climate models is calibration. Researchers create a climate model and use it to predict the weather of last year from the weather the year before that. If the predicted weather doesn't match what really happened, then the model must be adjusted. Repeat until the prediction matches. Careful researchers will then take another historical set of initial conditions and see if their model works for those, too. If not, something is wrong with the model.

Very simplified, if your model doesn't have the Gulf Stream, simply note that Europe is a little warmer than the same latitude in America and you might get reasonably good predictions.

Other climate models are less dependent on calibration, but they need more initial data. If they don't want to calibrate for the effect of the Gulf Stream, they have to calculate those effects. That requires data on the shape of the sea floor, the shape of the coast, and so on. The number of islands in the Caribbean and the channels between them matters. For the atmosphere, they need the shape of the mountains, etc.

That means when you talk about an ocean with an average depth of 3,767 meters, you imply that you're working with four digits of precision. You won't get answers with that kind of precision on Worldbuilding.

For reasons like that, I consider many of your questions unsuitable for Worldbuilding. To get a good answer to your climate questions, first you need a much more detailed question, and then somebody has to do a lot of hard work. I'm not currently in academia, but I guess a good and substantiated answer might well be worthy of a BSc or MSc thesis in mathematics or Earth sciences. Anything less than such a thesis is "primarily opinion-based" ...

The orbital question is slightly easier to solve using numeric methods, but the inaccuracy of the methods would make the answer worthless for any practical purpose.

Not the answer you're looking for? Browse other questions tagged planets orbital-mechanics solar-system .

5
If Mars Were a Superearth
4
Terra Preta in Africa
2
What Would the Arctic Ice Caps Look Like in This Current Map?
-3
In This Alternate Europe, Where Does Mediterranean End and Cold North Begin?

6
If the Moon Titan Orbits Earth
5
If Mars Were a Superearth
4
How This Alternate Solar System Influences the Milankovitch Cycle
2
A Blue, Drenched Mars
0
ELEVEN Inner Planets?! What Will the Ice Ages Be Like?
4
Geography of a Super Venus
6
What star can give an earth-like planet a 1-day year?
5
How Would These Planets Affect Earth's Eccentricity?