The cardinal directions on a flat world? [closed]

This is a simple question.

What would a civilization on a flat world call the directions on a compass?

I'm going to avoid Sir Terry's nomenclature, because it is so tied into the Discworld series I think it'd stand out like a sore thumb if anyone else used it:

Axle - towards the centre. Also could actually be the centre; the flat world equivalent of the Arctic - leading logically to:

Antaxle - the edge, and towards the edge.

Spinwards - obviously with the spin.

Backwards - against the spin.

Not really happy with "backwards" though. You could follow the Axle / Antaxle scheme and have Antispinwards, but I like that even less.

I was also thinking you could also use nautical terms if your world is ocean-heavy enough for sailing terms to have plausibly entered common usage:

Runwards - in the direction of spin; running is sailing with the wind, so implies it is the "easy" direction - the one that goes with the flow, as it were.

I quite like "tackwards" as it implies "backwards" while sounding quite fantasy-esque.

Just realised there are two very obvious possible terms for the radial directions:

I used this Wikipedia page to ensure I remembered my terms correctly; it's a treasure trove of nautical words!

If compasses work then the Bridge directions are fine. We did not have to discover the north pole to have a north. If the sun rises and sets in the same general places every day then east and west are knowable and the same as ours.

But remember the earth is not disc shaped but flat and square so it has four actual corners like the bible clearly states. 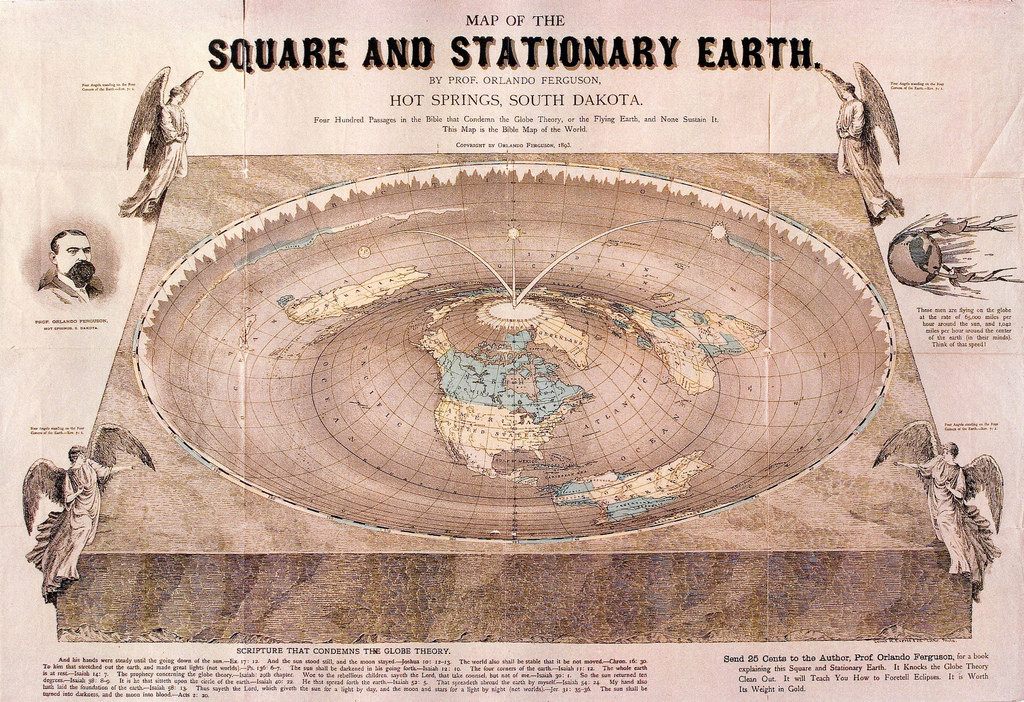 You've already answered your own question in the comments but I'll elaborate because I'm not sure you've understood them properly.

Assuming your planet is a spinning disk (elephants and turtle not required, what does the turtle stand on anyway*)

Rimward
Towards the nearest point on the edge

Hubward
Towards the centre of the disk, the hub of the spin.

Turnwise
In the direction of the spin. You could replace this with clockwise.

Widdershins
Against the direction of the spin.
This is an old English word meaning anticlockwise and implies the "wrong direction".

The Compass
"On the Disc, if you enchant a needle it will point to the hub, where the magical field is strongest", perpendicular to the needle is the tangent to the Turnwise/Widdershins circle.

The Zero Meridian
This is key to navigation, the arbitrary point from which all others are measured. The zero meridian, as per the Greenwich Meridian lies on the line from the hub to the rim through the dominant sea trading city. Everything else is calculated relative to that position. Absolute Grid references can be given as degrees round the circle from that point (Turnwise or Widdershins) and miles from the hub.

It should be noted that navigation on open water is going to be really hard. If you're actually concerned about accuracy in such things you'll have to build a system such that it can be realistically done. Or just ignore it completely, this is probably the better bet.

*It's turtles all the way down

Island nations like Hawai'i use it all the time: ocean-side (makai) and volcano-side (mauka, toward the center of the island).

So your flat world would have one important direction towards the center.

Given fact in many languages names of directions are referring to position of sun on sky, and they are originated in times when people believed earth is flat. There is big possibility, directions will be same as ours.

Not the answer you're looking for? Browse other questions tagged planets map-making navigation or ask your own question.

32
Gravity on a Minecraftian world?
9
In a World of islands floating in the air how would people navigate?
9
How would one mark directions in three dimensional space without north/south/east/west?
9
When did humanity have the knowledge to prove this semi-flat world is an octagon?
11
Drawing Maps; flat distortion
12
Figuring out the Cosmic Compass (Updated)
15
Can a low-tech sailing ship tell how deep the water is?