If Mars Were a Superearth

For this scenario, we must look at the postercard of the term "superearth"--Kepler-10b.

Its mass is almost 3.5 times greater than Earth, and its diameter 1.4 times wider.

Now let's imagine that Kepler-10b takes the place of the fourth planet, that of Mars. 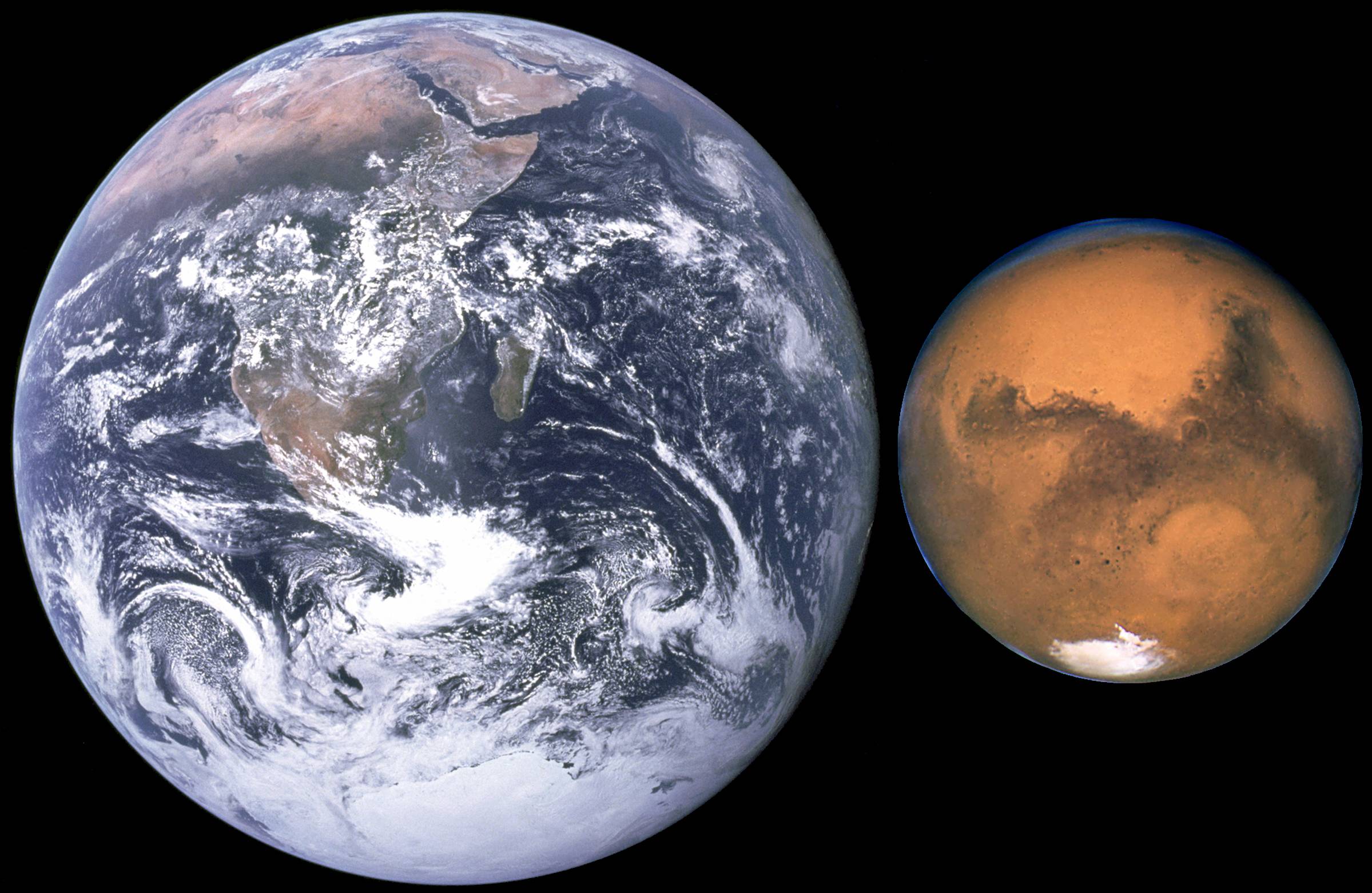 Mars' mass is 15% that of Earth's, and its diameter is half as wide.

So if Mars were enlarged to the size of Kepler-10b, how would Earth's orbit be affected? Will this super-Mars draw in fragments from the asteroid belt, essentially protecting Earth from asteroidal catastrophe?

Once again: the orbits of all the smaller planets are chaotic in the mathematical sense. We know by observation and computation that our Earth's orbit in the known solar system is stable for the next 100M years or so, after which errors in the observations render prediction as hopeless as forecasting next month's exact weather.

Change anything, and you'll need to re-run the forecast. Also there's an issue around whether that new planet would have prevented the rather unlikely formation of the Earth-Moon system, and whether life could have evolved if Earth did not have its enormous Moon.

No, that would not make a difference to the stability of other bodies in the solar system. The planets have carved their lanes and keep from interfering with each other, and Mars does that already.

A super-earth would not offer protection in the manner of Jupiter. Jupiter is in another league! We don't even hear about the same kind of properties for Saturn.

While the gravitational impact of such a big 4th planet on Earth would indeed be negligible, let's check why that super-Mars was allowed to be that big.

Mars actually should be much bigger than it is - the amount of material found at 1.5 AU should even have been greater than at 1 AU. Of course, at 1.5 AU there was less iron and more silicates, so Mars should be at least rivaling Earth with its size. According to Grand Tack hypothesis it isn't the case because Jupiter formed much closer than it's today - at about 3.5 AU and migrated inward stopping at about 1.5 AU then receded because of tug from Saturn. Jupiter's formation must have been rather quick - it had to acquire its hydrogen and helium before they were swept away by solar wind. So early in Solar System's history there is a planet that sweeps the most of material from Mars' orbit and compresses much of it at about Earth's orbit.

So, to allow super Mars, we must remove (or at least severely cripple) Jupiter. Then indeed, with all this material in place we could have 4th planet even bigger then Earth but perhaps lighter. However, that means that there is no condensed band of material at 1 AU - it is more evenly dispersed thorough inner system. It isn't to say that Earth wouldn't form - actually the state of Solar System after those ~4.6 billions of years without Jupiter would be very different in unpredictable ways. We don't know how much planetesimals would form if not Jovian sweep through young system, how much would avoid spiraling into the Sun, how would they collide and when they mostly stop colliding (so that life could evolve significantly).

And conversely: would ice giants later sweep through outer disk regions if not Jupiter's influence? In our timeline (as reconstructed in Nice model) it caused Late Heavy Bombardment - should it happen in our hypothetical scenario, there would be no Jupiter to protect us. But without Jupiter, there could be nothing to prevent Saturn accumulating more and more matter and possibly become a specimen of "hot jupiters".

I'm trying to say that when asking such questions we just can't consider only static, present situation. We should check how could such situation come into existence and - as you can see - once we begin to do that, we quickly enter the realm of wild speculations, too broad for a sensible answer.

TL;DR: after removing/diminishing Jupiter and enlarging Mars, any Earth orbit (or no Earth orbit) and asteroid belt are possible. I doubt though if an asteroid belt could form if there was a massive planet nearby enough to be able to draw asteroids from the belt.

8
How would the sudden destruction of Mars affect Earth?
10
If Earth Were Forged by Fire and Ice
-1
A Larger Venus in Our Solar System

4
When the Moon comes crashing down (wait, it doesn't)
13
What is the minimum planetary mass to hold an atmosphere over geologic time scales?
3
Reign of the Gas Titans
6
If the Moon Titan Orbits Earth
4
How This Alternate Solar System Influences the Milankovitch Cycle
2
A Blue, Drenched Mars
6
Energy costs of giving Mars and Venus moons: moving gas giant moons vs. capturing a rogue planet?
1
If Earth's Moon Were Ganymede-Like, Part I: Rotation
4
How Habitable are these Planets?