Summary: I am looking for a portal transportation mechanism that is consistent with the laws of thermodynamics.

Portals (or wormholes or gateways, something that connects two different locations in space-time), are usually portrayed with interesting side-effects: 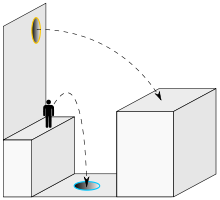 These effects are usually either actively exploited (Valves Portal game), or prevented by some special security mechanism (Stargates in the tv show disassemble and later reassemble matter)

However I am looking for a 'realistic' portal mechanism that does not have those sort of effects. The standard portals strike me as unrealistic for the following reasons:

For one thing, such a portal clearly violates conservation of energy, or it would need some sort of special mechanism and power reserve to account for the difference in potential energy between the two portal locations. Any custom mechanism that converts the energy difference into something else risks violating the second law of thermodynamics.

I would therefore expect that when a electrically positive charge is placed next to one portal, the other portal would attract negatively charged particles.

Likewise, if a planet is placed next to one portal, the other portal should attract matter. Therefore the air from the planet would not escape into space through the portal, since all air that passes trough is strongly attracted back towards the portal.

I have however some trouble envisioning all logical consequences of such a portal mechanism.

I realize that these sort of questions could be answered kind of arbitrarily, given that no such portal system exists right now. I am looking for the most consistent and natural mechanism, in line with the laws of thermodynamics; in particular the law of conservation of energy.

Is there a way to get such a consistent gate mechanism, without hand-waving all difficulties away as 'magic'?

I am mainly interested not in the physical mechanism that would make such portals possible, but in the observable consequences such portals would have, assuming they are possible.

(As far as i understand, the current best physical concept for wormholes, a traversable Einstein–Rosen bridge, involves a large mass within the wormhole itself, as well as surrounding negative-density stabilization structures. So the wormhole itself would have a couple weird gravitational effects. For now, I would like to ignore these additional effects and thread them as negligible)

One possible answer is: Both ends of the portal must have same potential with respect to gravitation and with respect to electromagnetic fields. This is very natural, since both portal ends are basically the same point of the space and there should not be anything special on the border.

How does this manifest? As the gravity field of Earth leaks through the portals, the gates acquire false gravitational mass. (Not to be confused with inertial mass - it exerts forces, but does not make the gates harder to accelerate.) One acquires positive false mass and the other negative false mass, so the total change is zero. How big will the false mass $m_f$ be? If we assume the gates are spherical and have radius $r_g$, one is higher by $h$ meters from the other and they are near Earth surface, the potential difference between them will simply be

where $g=9.81\;\mathrm{m\,s}^{-2}$ is the gravitational acceleration on Earth. To compensate the difference, an equal potential difference must be created by the false masses of the gates:

In order to obtain the acceleration at the gate, we use formula for gravitational acceleration using the gate false mass

The previously presented calculations assumed that the portals have zero inner length. In such case, the difference in potential energies has to enter through the false mass of the portal mouths, which often lead to extreme forces near the mouths. But if there is space inside the portal, an inner length $L$, the forces can be signifficantly smaller. Problem is, the forces are not uniquely defined and one has to assume some things to get particular numbers. Let us assume that

With these assumptions, we can calculate how does the portal behave now. If previously, we calculated the difference in potential $\Delta \Phi = g h$, now this difference is reduced by the potential gain inside the portal equal to $a_g L$. So we have

With this assumption, now have to update the formula for $m_f$ to

By solving these two equations, we obtain the final formulas

As we can see, with large inner length $L$, the forces near the portals can be made arbitrarily small. It is still true that if you are going from the lower portal mouth to the higher one, you are going "uphill" and you must exert work.

How does it look inside the portal? Interestingly, there would be no walls. The space wraps into itself, so it looks like if you are standing between four mirrors: all around, there are images of yourself and of other things inside the portal, just they are not images, but they are really there. You could see your own back.

The solution above conserves the energy properly. However, the energy is not the only thing that should be conserved. There is also momentum. With momentum, I do not have any nice idea how to put it into equations. But similarly to the previous case, I guess there would be forces acting on any entering object that change its momentum as it is passing through the portal.

I do not know if this is the solution you wanted, but it seems quite self-consistent to me. I definitely do not guarantee that it is consistent with the general relativity - it is probably not. (On one side because the portal gates are curvature o space and require extreme exotic mass, which brings additional effects. On the other side because the proposed model is not the only one - I know at least about one more consistent possibility, that is probably the case for wormholes. If you want to go this deep, you should be asking about wormholes, not portals.

This is a really cool question, and I think I can (partially) answer it. Here goes.

If two portals are placed a different heights, someone approaching the higher portal should perceive a gravitational pull towards the portal, right?

I'll assume that you're talking about an object in between the two portals. In this situation, it would be as if the point in space where the upper portal lies were actually where the lower portal is - closer to the planet. The lower portal, on the other hand, would essentially be farther from the planet. But would anything happen because of this? Well, the portal is supposedly a "hole" in space. It's a two-dimensional opening. That means that there is no way for a three-dimensional object to only be at that point. The three dimensional object would have to be partly outside the portal, and so would feel the same pull of the planet as it would feel if the portal wasn't there. In the case of the higher portal, there would still be a pull towards the planet. Whether or not the object would move towards the portal would depend on how far it is away from it - in other words, whether or not the portal's gravity balances out the normal gravity.

Would someone approaching the lower portal also perceive a 'push' away from the portal, essentially some sort of anti-gravity force? After all, when passing through the portal they would gain potential energy, which cannot be gained for free.

This depends. The "anti-gravity pull" would come from the upper portal. Again, it depends on the distance between the portals, and where the object is in between them.

If one portal is placed in the ocean, would a bubble of air form around that portal, or a bubble of water around the other portal?

Here's an experiment that can give you the answer. Take a 2-liter bottle of soda (already empty). Fill it with water, so that it is entirely full. Screw the cap on tight, so no air can get in. Now take a toothpick and make a small hole midway down the bottle. What happens? (I'll hide the answer if you want to do it for yourself)

This represents what would happen if the ocean and atmosphere were not connected - which they are. Now do the experiment with the bottle open.

The water will flow out.

I highly doubt such a portal could exist. As you pointed out, it would violate conservation of energy (continued increase in kinetic energy), as well as special relativity (the object would move instantaneously - thus faster than the speed of light). If you're really pressed, you have to invoke magic. There's no realistic way for this to work.

Note: I know about the theorized Einstein-Rosen bridges, but they're highly speculative and have some key problems. See the Wikipedia page.

As a simple solution you could say that any differences in potential energy between a low and a high portal are compensated by the portal system itself.

When an object is teleported from a lower portal to a higher portal, the portal gun provides the necessary energy difference from its internal power supply. When that supply runs out, the portal either collapses or the preservation of momentum doesn't work anymore.

Another way to solve this is by converting the potential energy difference into thermal energy. An object moving to a higher portal becomes colder, one moving to a lower portal becomes hotter. Some early science fiction stories written by Larry Niven which deal with teleportation solve the thermodynamic problem this way.

Regarding gravity passing through the portals: Gravitation is by far the weakest among the four fundamental forces of nature. The smaller the scale, the more negligible does it become. At subatomic levels it doesn't play a role anymore, so when the portals would not transfer gravity, it likely would have no effect on objects which travel through it, as long as the portals aren't so far away that there are differences in gravity which would be so large that they cause sheer forces on objects which are half through the portals.

Not the answer you're looking for? Browse other questions tagged science-based physics travel or ask your own question.

21
Are portals possible?
11
Different gravitational and inertial mass
4
Feasibility of portal based Space-Domes

24
Settings formed by Uncontrolled Terraforming of Venus and Mars via Portals
37
What would happen if magic was constrained by the second law of thermodynamics
4
In 'portal', pushing interconnected portals on thin portal sized rectangles of material through each other?
7
Could negative matter/energy exist in a stable state?
6
Consequences of Portal-Travel
8
How do I reconcile portal mechanics for all situations?
3
How do I grant superheroes gravitational manipulation, justified scientifically?
5
(Please Someone Explain) Is time travel using wormhole as portals possible logically?
10
Does crossing a wormhole happen instantaneously, or with the course of time?
9
What would be some ways to balance energy/mass from a parallel universe to another when someone - or something - travels through a wormhole into it?