The long-term effects of the Moon being in contact with the Earth?

Now, let's assume that the Moon DID crash into the Earth, but Earth's politicians banded together and mustered the strength to slow down the moon so that it touches the Earth softly (using the sheer power of rhetoric, insincere speeches, and flawed logic).

What would be the long-term effects, environmental, political, and geographical, of the Moon being constantly in contact with the Earth?

Now, let's add a(nother) wrinkle to this problem. For some reason or another, perhaps using more rhetoric, insincere speeches and flawed logic, neither the moon nor the Earth has been damaged by the impact OR the gravitational pull.

What would be the effects in that scenario?

Rocks aren't strong enough. Set the moon down and it will crumble under its own weight. The Earth's crust is only a few miles thick and would not take the weight either.

You would wind up with a sphere, for the same reason these bodies don't have irregularities on this scale to begin with.

Even though it was lowered gently, the collapse of thousand-mile-tall mountains will release enough energy to melt the crust after boiling the oceans dry.

The Moon will actually turn into a ring

The Earth's Roche Limit for an object with the mass and density of the moon is about 9-18 thousand kilometers away from the center of the Earth. The moon is about 1.7 thousand km in radius. This means that the moon will be subjected to tidal forces sufficient to break it apart as soon as it got to within that distance of the planet. Physically, you cannot have an intact de-orbiting moon "landing" on the planet.

Congratulations, your politicians did it!

Not so fast, it's getting really tidy in here

Of course, the tides caused by a moon that much nearer would be immense (hundreds of meters). Add in the tectonic tidal heating (earth crust movements of several tens of meters each day), and the associated earthquakes and volcanos, and you might get (briefly) angry voters anyway.

PS: The magnitude and duration of the tides will depend on how quickly the moon decays in its orbit, and that will dictate if and how it turns into a homogenous ring (no tides). Moreover, the tidal fragmentation is likely to result in chaotic impacts among the fragments, which will likely send significant amounts of material barreling into the Earth, for a bombardment worse than the one that killed the dinosaurs.

If the moon was gently placed at the north pole after being spun up to earth's rotation a few things would happen. I am not doing the math so my answer will be inexact. I will try to err on the side of survivability. 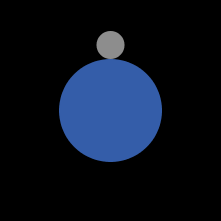 Notice the Moon is quite a bit smaller than the Earth.

2) The barycenter would shift. The moon is 0.012 times the mass of earth so its "down" would effectively be the direction of the just north of the center of the earth. all the dust loose rocks etc on the sides of the moon would fall towards their new home. I assume this will make some noise and make a dust cloud of some size.

3) Under the weight of the moon, the crust of the earth at the pole would be pushed down most likely cracking a bit as the moon tries to reach the center of the earth. Increased magma pressure is probably not a great thing for preventing earthquakes so there may be some of those. We will be lucky of it cracks if the crust somehow just deforms then most of the world's water would drain to the pole. Don't worry we will have some of both.

4) Other than really fun one that happened on moon kisses the earth day we will no longer have effective tides leading to widespread extinction in the ecologies that require them. Well, the ones that did not go extinct from the dust, earthquakes, lava flows and tidal waves.

5) Eventually, the moon becomes a sort of polar mountain and, in the long run, the poles are flattened again, The dominant species is procaryotic. Except the moon is denser than the earth's magma and would sink like a stone.

There are no long-term effects, because the very short-term effects destroy all life on Earth. The Moon immediately breaks up due to the tidal force from the Earth's gravity, and while some of the fragments eventually form a ring around the Earth, and a few are ejected into higher orbits or out of the Earth's gravitational influence altogether, most of them end up crashing onto the Earth in a colossal meteorite bombardment that melts the surface and sterilises the planet.

51
Could two planets be tidally locked to each other so close they share their atmosphere?
30
What happens when one planet “lands” on another?

4
When the Moon comes crashing down (wait, it doesn't)
4
What would be the effects of an Earth-like planet with a longer year and longer lunar orbit?
4
Could a man-made black hole deorbit the moon?
33
Where is the best place to park your damaged spaceship, longterm?
13
Could the moon crash into the earth if we colonised it and increased its mass?
2
How to get a habitable moon without too long day-night cycle?
2
If Earth had a smaller second moon, what would the sky look like?
4
What would happen to the moon if Earth shattered?