In my earth-like world, there is one thing that separates it from Earth; this world has a single rocky ring, around 10.3 meters thick, 5(ish) miles wide.

In our own world we know that without an orbiting body a world will lack tides. Our own moon creates tides despite being over 380 000 kilometres and we have asked what having two moons would do to tides, but we have not asked what having rings would do to a world in terms of tides. So what would the effects of rings be on tides?

While hohmannfan is correct it's not quite the full answer.

In a traditional ring setup where the ring is in line with the planets equator then the tidal effects will be small and just down to variations/oscillations in the rings.

If on the other hand though the rings are not lined up with the equator then you would get tidal effects every day as the planet surface rotated with respect to the position of the ring. Setting this up would involve some unusual mechanics probably involving a moon being captured in an unusual orbit and then breaking up to form a ring.

Note that the gravitational effects near a ring are strange, the strongest effects do not happen directly under the ring. See this paper for some more information:

No effect at all.

Gravitational influence on its own is not enough, you must have variations to create tides. In a ring, the mass is distributed equally in a symmetrical shape.

To turn the question on its head, can the tides have an effect on the rings? Yes, if one or more moons are orbiting the planet, they can make waves in the rings, like just visible in this image of Saturn's rings: 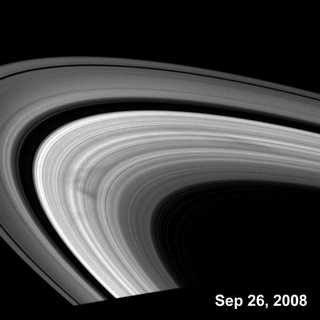 Not the answer you're looking for? Browse other questions tagged science-based reality-check planetary-rings or ask your own question.

111
How would having multiple moons affect tides?

11
A world with a moon orbiting much closer than ours
8
How to put satellites in orbit on my ringed world?
1
Effects of Rings; Social effects
13
Liquid water on both sides of a tidally locked planet. Feasible?
0
Planet with two moons and rings? Is it possible?
2
What If Earth Had an Equatorial Ridge
3
Consequences of a two-mooned system losing the one closest to the planet?
8
Is this planetary moon's calendar possible?