What happens when one planet “lands” on another?

Imagine, if you will, an Earth-like planet orbiting a Sol-like star. Now imagine that, from somewhere outside the solar system, a rogue planet, rocky and of roughly the same size and mass of the first planet, enters the solar system on a trajectory that eventually takes it so close to the first planet that they end up touching one another. What happens?

I was thinking that if both planets are spinning on their axes, they're going to rub against each other and potentially cancel each others' spin. Would their gravitational pulls eventually merge them into a larger rocky planet? How long would that take? If the Earth-like planet was inhabited, what would the inhabitants experience (after the panic subsided)?

Your planet is screwed.

As was mentioned in comments, the Giant Impact Hypothesis details a very similar situation, as Earth collides with another body of slightly smaller size at some angle of roughly 45°, so neither of the two are totally destroyed.

In a more direct impact, the centers of both bodies will collide and fuse, while excess material will be thrown off in one or more tails. Eiland et al. (2013) presented interesting models with one and two tails:

Alternatively, if the planets collide at a more oblique angle, a disk may form:

These are simulations that result in material being ejected into orbit, thus forming a moon - the same thing that happened with Earth. In a completely direct impact, this may not happen; the two bodies could be destroyed. However, your scenario will most likely lead to a glancing blow and a disk. Note that in the first simulation only, each planet is spinning in the opposite direction as the other.

See also Stevenson (1987) for a thorough theoretical treatment, which also explains how collision timescales differ based on different impactor masses: 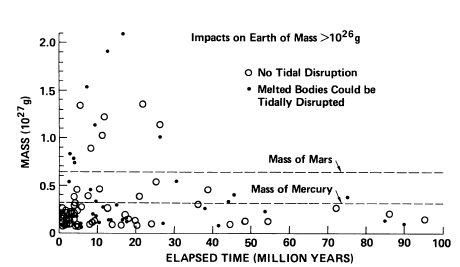 That said, things might be different here. The incoming planet may be moving much quicker than the other body was in the Giant Impact Hypothesis, meaning that both bodies could be completely destroyed.

More cool (colorful!) simulation images can be found in Canup (2003), which should give you a better idea of the temperatures reached during such collisions (about $\sim10^4$ Kelvin is possible!).

As I mentioned here, death may come because of these high temperatures, which will heat even the deepest layers of both planets. Life can't run and hide underground.

I assume the planets are on a "gentle" (shallow) approach to one another, which seems to match your description of "eventually takes it so close [that] they end up touching". There will be panic as the planets draw nearer.

Everyone will die; it's just a question of when and how.

It will cause great earthquakes and incredible ocean tides (and tsunamis), which will obliterate anything within a few hundred kilometers of a coastline. It will also destroy key infrastructure.

The atmospheres of both planets will be easily affected, causing weather patterns of a far greater magnitude than anything we know as both atmospheres will be pulled toward the center of mass of the two planets.

If anyone is still alive after all of the above, this last bit should do them in.

Edit: Fixed math (and included steps!) Thanks to MadBender for the catch!

The Roche limit is the distance (radius) within which a celestial body (like a planet) can no longer hold itself together via its own gravity, and is then pulled apart by the gravitational tidal forces I introduced, above. The Roche limit (d) for rigid bodies1 $\, m$ and $M$ (your twin Earths), looks like this:

$\rho_M / \rho_m$ is the ratio of densities of both planets. Since they are identical, their density ratio will be 1/1, thus:

As the two planets come within the Roche limit, the effects from the previous section will have already had catastrophic results, and started to elongate the planets. The difference is, that near the Roche boundary, gravity won't be enough to hold the planets together.

The overall mass stays the same, but the planets are literally torn to pieces. The atmospheres and oceans more or less go without a fight (see previous section), but the solid pieces will come bit by bit, and the (now very chaotic) motions will result in more impacts, which will continually pulverize the pieces until there isn't much left but a ring of debris around the star, almost certainly with no survivors.

What actually kills the remaining inhabitants is somewhat a matter of chance, but could be:

With the Earth's current orbit, the planet will have a velocity at infinity of between $12.5km/s$ and $72 km/s$, depending on the direction of which it hits. (It has an even higher velocity if it comes from outside of the solar system). Is this enough energy to destroy both planets into small pieces?

Assuming the other planet is similar to the Earth too, we can use gravitational binding energy to answer that question. The combined energy required to totally destroy them is $4.5 · 10^{32}J$. The energy added from the slowest impact is $4.7 \cdot 10^{32}J$. So both planets will be turned into molten gravel.

If both planets are the same weight and size, and almost touch each other, it should be intuitive that at the point where they touch there is zero gravity, since the pull towards either planet cancels out each other. If it's not yet intuitive: imagine you are near where the 2 planets touch and you fall down - how can you tell towards which of the 2 planets you would fall? You can't.

The circumference of the earth is about 40'000 kilometers, and it rotates about once every 24 hours. So at the equator the speed due to rotation is about 40'000/24=1'666 km/h, and the one thing holding the planet together was gravity. Imagine swinging a ball on a long string at 1666 km/h and letting go.

Rocks (a.k.a. continents) and everything else, like air and water, will fall off of each planet, and either fly into space or bombard the other planet. For comparison, in an extremely strong tornado, air moves at 600 km/h and flattens buildings, now we have air, water, and mountains, moving at 1666 km/h and more. Once anything impacts the other planet, it becomes part of the other planet's surface. From there it will fly off again, for the same reasons it flew off from the first planet. No matter where you are, you either get squished or you get to see space - and probably get squished once you collide with other space rocks.

Time to start colonizing mars, and hope the debris doesn't impact too hard there. Maybe it would be safer to colonize a moon of one of the gas giants instead, because they are further away.

Not the answer you're looking for? Browse other questions tagged planets rogue-planets or ask your own question.

14
Could it be possible for two planets to collide and not kill everything?
6
How can two planets merge into another, bigger planet?
5
The long-term effects of the Moon being in contact with the Earth?

13
Emulating a geocentric planetary system
5
How to enter the orbit of a gas giant?
13
Is it possible for one star to orbit another?
4
Could two planets in the same solar system create intelligent life
0
Can we manipulate the Sun, gas and ice giants to create more habitable planets and extend the life of our sun?
1
Would it be possible to have three planets merge but still allow some life survive?
5
How does the n-body-problem affect a star system around a red dwarf?
16
How long until two planets become one?