Would a world leaning towards technocracy be more “advanced”?

Back on the Earth, or in the West at least, we think of democracy as the ultimate political regime. Revolutions demand its establishment and some countries even add 'democratic' to their names (e.g.: Democratic Republic of Korea, aka North Korea).

But here, on Whateverius, technocracy is what people crave for. Other than that, this alien world is almost identical to Earth.

If such a world exists, would it be more advanced (economically, technologically) and less prone to armed conflicts? Or, due to the pragmatic nature of its leaders, more conflict oriented?

A technocracy is obsessed with efficiency in government. The problem with this is that it will tend to stamp out wasteful behavior. Which is fine if the behavior really is wasteful but not if the behavior leads to advancement. So a technocracy has the same problems as any other centrally-planned society.

If individuals make their own decisions, they will inevitably make conflicting decisions. This is bad in the short term, as it makes the decisions less effective. In the long term though, it means that an unpopular decision may still turn out to be successful. This is particularly true if the situation changes.

Another way of saying this is that monoculture is dangerous.

For this reason, a technocracy might grow more slowly than a democracy. The technocracy will save by focusing resources on the most likely areas. But the occasional solution will arise in the less likely areas in the democracy.

It might well be less conflict-oriented. War is wasteful. Two technocratic governments may well be more likely to compromise. But that too is likely to lead to slower advancement. Necessity is the mother of invention after all. We didn't investigate nuclear fission and fusion to make electricity. We did so to make bombs to use in war.

The European Union is considered a technocracy by a lot of people.

It's directed by people chosen and not elected. With the few elected representatives sent by their parties to get a golden retirement there. There is even a German party that was elected on the grounds they would change their representative early and just stay out of office.

Is it more advanced ? I doubt it.
The EU fold in the face of the US, the corporations and pretty much anyone who can lobby the "specialists". The people who decide are perceived as completely detached from reality and from the consequences of their work.

By itself technocracy has no impact on the advancement or level of aggression a nation has. The difference between technocracy and democracy is in how you choose and oversee people in doing the government not in what the government does.

There are lots of empires in the history which for relatively long periods had stable expansion by conquest and had economies and political systems adapted to that. A technocracy evolved under such conditions would try to maintain a steady state of controlled and managed war with only brief periods of peace before the next war.

Which is why a technocracy is not a good solution as a monoculture. It is simply too stable to adjust well to changing conditions and requirements. Realistically an "advanced" government would mix it with something that is reasonably dynamic but is weak in handling long term stability and planning.

Democracy is one such system. The EU, for example, is a technocracy not because anyone things it is the best way to manage things, but because that best compensates the weaknesses of the democratic national governments in handling the long term planning required for something like the EU to function. The downside is that if you consider the EU in isolation of the national governments — or worse, in opposition — it simply won't make any sense.

Any really efficient system is a mixture of different solutions for different issues. And has the flexibility to change solutions as needed. Avoid monocultures, indeed.

Scientists advance science out of a passion for learning.
Investors in scientific endeavors might hunger for power, but the actual scientists usually only hunger for insight and for the creativity needed to test weak theories to make them strong.

Distracting your technological leaders by forcing them to also run the government would only remove the finest minds from our exploration of the unknown. If anything, a government that discourages its best and brightest from running for office, will have the higher technology, because those precious few geniuses will not be distracted by the lure of power.

@VilleNiemi has corrected my misunderstanding of the word Technocracy and under normal situations, I would delete my erroneous answer as irrelevant and off-subject. But in this particular case, there is value in leaving it here. You see, before writing this answer, I went to Bing to find out what Technocracy meant and this is what I found... 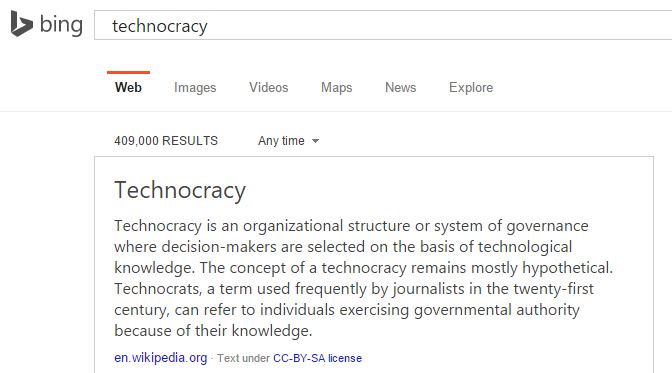 A word of warning to anyone else who might use a browser to augment their vocabulary... Always check the little blue text under the definition. Just because it comes from a leading search engine, doesn't automatically make it right.

Not the answer you're looking for? Browse other questions tagged politics alternate-worlds or ask your own question.

12
P = NP goes public today. How will the world look like in a week?
2
Flat world and water
8
How might an inter-planetary confederation turn into a highly centralized empire?
4
Could the inhabitants of a acidic world still develop a technologically advanced society without metallurgy?
8
How to design a realistically looking technocracy?
12
How would a Dictatorship make a country more successful?
22
Is there a practical way of making democratic-like system skewed towards competence?