How wide can a river be?

Related but not a duplicate: How long can a river physically be on a planet?

How wide can a river possibly be? Many river are over 10 kilometers wide, but how wide can a river be before it is no longer a river? Are there any physical limits on its width based on relative location to the ocean or to the mountains?

This is largely a question of semantics.

The widest body of water in North America that is actually called a river is probably the Saint Lawrence. I measure the estuary at 133km at the upstream tip of Anticosti Island.

Further upstream on the same system, we have Lake Superior, the largest (Freshwater*) lake in the world by area. There is a peninsula on the southern shore which limits its width, but I measure it at 173km at the widest point. This is probably the widest body of fresh water in the world.

The gulf of California, if considered part of the Colorado River, would be wider. But that would not really count today, as a lot of the time the Colorado River does not reach the sea, because its entire flow is used for irrigation.

A more useful measure is the discharge, which is about 200000m3/s for the Amazon, and about a fifth of that for the next largest river by discharge. If we imagine a point on the Amazon of width 10km and average depth 20m, the average velocity would be 1 m/s. Some kind of definition by velocity would be useful to differentiate between rivers and lakes.

The two largest rivers in North America by discharge are the Saint Lawrence and the Mississippi, at around 17000m3/s each.

So far this has been a somewhat North America centric answer because I found the statistics there interesting, but now a shout out for my own continent: The Baltic Sea in Europe has a salinity of less than 1%, which by some stretch gives it a claim to being a "river." It is over 300km wide at its widest point, before it squeezes out into the Atlantic at Denmark.

*The Caspian sea, if you consider it a lake, is larger than Lake Superior. To me it is a sea, not a lake, as it is salty and has no outflow.

The Amazon is up to 11 kilometers wide at certain points, and the Lena River is 14 km wide. Both are above your goal of 6.3 km. There are probably more examples, just some quick 'net searching turned up two.

EDIT (In response to question edit): The updated phrasing of the question is now "When is a river so wide it is no longer a river?" This is now a question of culture, language, and philosophy.

This question might be more appropriate for English Language & Usage (Stack Exchange), but I'll answer it here anyway.

Width is not much of an issue, as long as you have suitable length that the water can travel down, and the other topographical features that ensure that those droplets keep moving.

In my mind, the definition of a river is that it is flowing. Unlike, say, an ocean/sea/lake, which basically sits but does not have a direction.

This is even consistent with the phrase, "the rivers of time". Time flows, and so does the water within rivers.

The real limit is when people start to argue that the river flows into a lake rather than being a wide river any more. According to the Encyclopedia Brittanica, a lake may flow slowly.

The Florida Everglades is known as the River of Grass. See http://www.nps.gov/ever/learn/nature/hydrologicactivity.htm , from the National Parks Service website for the Everglades.

https://en.wikipedia.org/wiki/Everglades (for what that's worth) notes the Everglades as "a slow-moving river 60 miles (97 km) wide and over 100 miles (160 km) long, flowing southward across a limestone shelf to Florida Bay at the southern end of the state."

A different question is whether the East River (separating Manhattan from Queens and Brooklyn) should really be called a "river" since it is entirely at sea level. Or is it a branch from the Harlem (a branch of the Hudson)?

The Río de la Plata (historically translated as Plate River although "plata" really means "silver") is generally called a river, although the term is open to argument. It's 219 km wide at its widest point, defined by an international treaty between Argentina and Uruguay.

"For those who regard it to be a river, it is the widest in the world." (Wikipedia doesn't take sides.)

There's a clear division roughly where the river flows past Montevideo; up to that point, the river is coloured by the sediment flowing from its sources. A huge shoal (sandbar) blocks the entry of oceanic water, so the "inner" river is still essentially freshwater. It's about 100 km wide at that point.

Beyond that point, in the "outer" river, there is clearly still water flowing out to the sea, and the salinity has not yet increased to marine levels. (There's another nice satellite view on Wikipedia which shows the flows.) 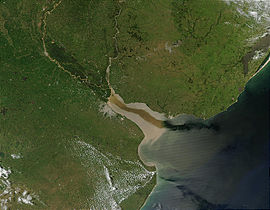 6.3 KM isn't wide at all.
Plenty of rivers we know about are wider then that.
Just take a map and look closely at the Amazon, Ganges, Yellow River, the Nile. They all are wider in places.
And many smaller rivers have wider sections too, when they flow through a lake. A lake that is either artificial (power-plant with dam) or natural if the river filled up a large valley until the water rose high enough it could flow out at the other side.

In general rivers are wider near the sea and less wide near their origin, just because of the volume of water. As you go from origin to the sea tributary rivers add more volume.
But there are exceptions:
Some rivers flow not to the sea, but to a dead-end in a desert. Due to evaporation they can actually loose water so they just dry up as you move towards their end-point.
Other rivers go from running through a narrow riverbed (river is narrow, but deep and/or has a fast current) to flowing out onto a very flat plane. Then the river flows out to a very wide bed, but will be very shallow and have little current. (Volume of water doesn't change, so as the riverbed becomes wider the depth/current must go down.)
And further downstream the river may again become narrow.

In short: It all depends on the terrain the river flows through. Whatever size of river you want for world, you just need to play a bit with the terrain to make it happen.

It's a matter of flow, when a river goes wider then it goes slower. Hence, if the river is wide enough you'll see it like a swamp, because the water would look almost static.

The most known case are the Everglades. Which might be a river of 60 miles wide.

Since we're talking about world-building and not the actual real world, it seems to me that a river can be a river if it's a body of water (or some fluid) which has a directional flow. (and is bigger than a stream, rivulet, creek, etc) Depending on how fantastical you want your world to be, you could get away with variations on the theme (round rivers and infinite rivers come to mind) but if you stick with "a body of water with a direction" you're probably going to be okay.

Not the answer you're looking for? Browse other questions tagged reality-check water-bodies rivers or ask your own question.

15
How long can a river physically be on a planet?