If a culture split up and its parts were isolated for 750 years, would they then be able to understand each other? [duplicate]

Depends on what stage they are split and what conditions they each have to live with. However, most likely they are going to be quite a bit different. Look even at any part of Europe at two points 750 years apart. The same culture generally wouldn't recognize each other, much less being separated.

Even if you take something similar, the vikings invading and settling Britain, they still had some contact with the homeland but 750 years later they were completely different in many respects.

Language is always evolving and it is likely they would diverge a lot over 750 years. Look at English even since Shakespeare! And he was about 500 years ago. Two cultures that had no contact for 750 years likely wouldn't be able to understand much at all of each other. Only having some basic words in common, since even pronunciation tends to drift too. In China there are communities on the opposite sides of mountains that can't understand each others dialect.

I don't think there's a clear-cut answer here. There are so many factors in play with how languages evolve over time that you can convincingly take it into either direction.

While most answers seem to suggest that the two groups wouldn't understand each other, you can also find real-life examples supporting the other side:

Greek is considered to be the oldest recorded living language, with ~35 centuries worth of written artifacts. While the language underwent evolution over the ages, the changes are said to be comparatively minor, due to lucky historic circumstances (Roman Empire was effectively bilingual, Byzantine Empire was clearly more Greek than Latin).

Present-day Hungarians are descended from Magyars, a nomadic tribe that settled in Carpathian Basin in late 9th century, converted to Christianity and established the Kingdom of Hungary.

Fast forward to 1235, one Friar Julian left with a group of Hungarian monks in order to find Magyar tribes that were supposedly left behind in the east. He found them and despite the 300-400 year gap, during which there was virtually no contact between the two groups, was able to communicate with them in his own tongue.

Interestingly, other than the language, the culture of both groups went two separate ways - Hungary was already an established feudal European country, while the eastern Magyars were likely Tengrist and led a lifestyle similar to their shared ancestors.

So if you want your two groups to be able to understand each other - it's something that can plausibly happen.

According to this chart 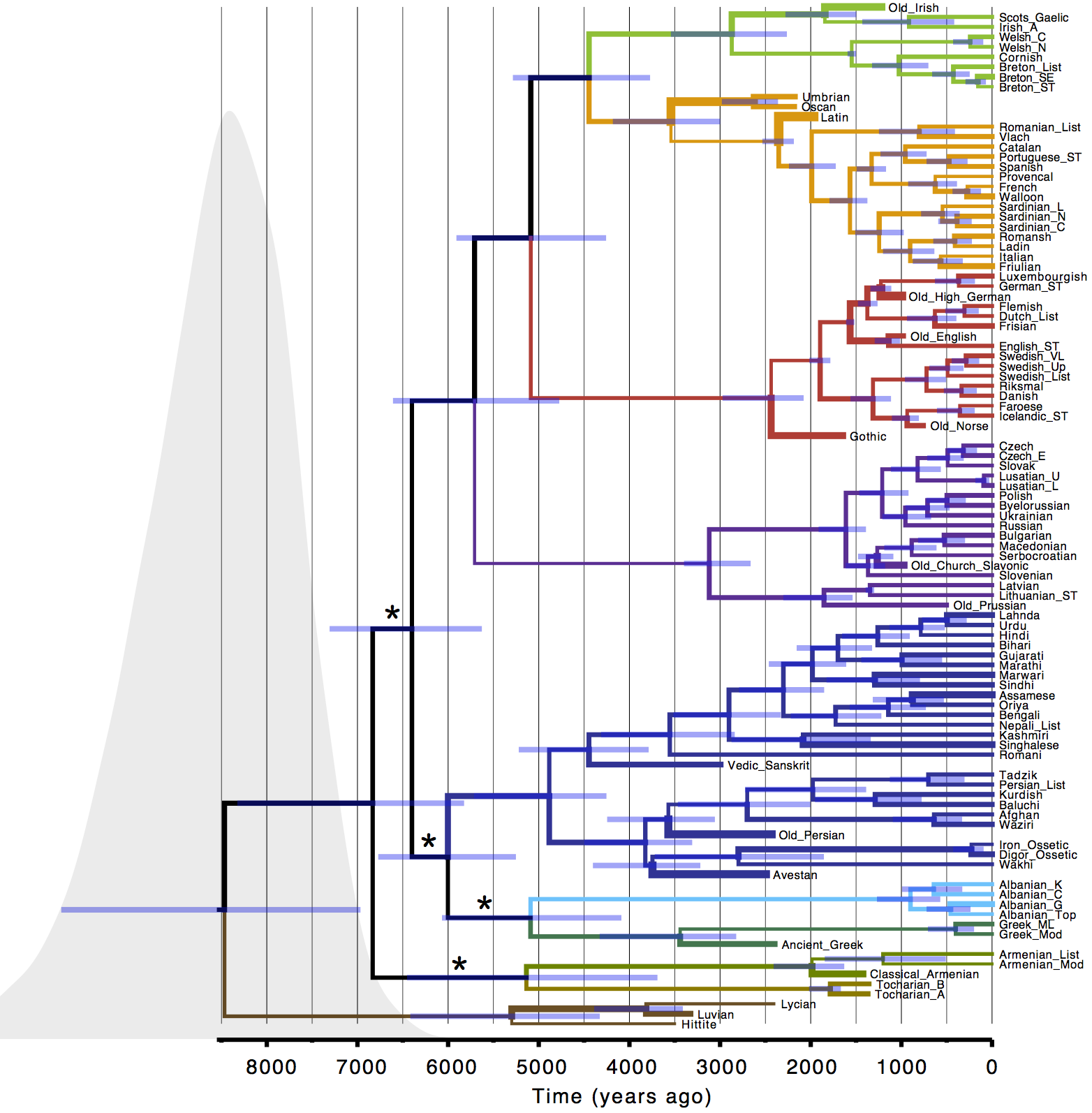 from this paper in sciencemag

They would be different languages. Isolated groups tend towards conservatism in language so the group blown off course would most likely have the older usage.

I read an article* once about a group of fur trappers from the Hudson's Bay Company. When they arrived at the trapping/hunting area, they set up their camps on either side of a river, so one group hunted to the north of the river, and another group to the south of the river. Because the river was so big and treacherous, there wasn't much contact between the two communities.

Anyways, long story short, after a very short period of time, like less than a decade or two, the languages spoken by each of the communities had diverged enough that they were completely difference dialects. The isolation and social order on each side of the river was enough to cause a drastic shift in the development of the spoken language of the people.

So basically, after 750 years, and being completely isolated from each other in completely different environments, I'd wager the two groups would be very different to each other in not just language, but culture, social development, core values, diet and attitudes.

*I'm trying to find a link to the article I'm talking about. If I dig it up I'll post it here.

Try reading The Canterbury Tales in its original [olde English] form. An excerpt:

For reference, that was originally published in 1475, only 545 years ago, and of course, we have not been completely isolated from contact with England (or the Middle English language).

Seems safe to me to say that two cultures and languages would be different enough as to be completely different and would not be able to understand or relate to each other anymore.

Language-wise, I believe there is at least decent understanding among modern speakers of Athabaskan_languages which had been separated for at least that long, some under circumstances very similar to those you suggest (eg the Navajo moved to the what is now southwestern US which is much hotter and dryer than what is now Alaska). There's some more information for this case here.

They would probably be able to understand each other with great difficulty. American and British have diverged from each other for a long time, and they are still relatively similar. And these two groups have been in contact with each other for only 200 years.

However, these groups have had differing external influence as well. Britain is close to Europe and especially France. America is composed of a lot of differing ethnicities and is close to Spanish speaking countries. I'm assuming without much external influence then these two groups of people would be able to understand each other. (I mean, seriously, I used to think it was still the Middle Ages in Britain because they still use torches, and don't have flashlights.

Not the answer you're looking for? Browse other questions tagged society evolution culture language .

10
How do I keep a language shared by two separate peoples, static for as long as possible? The lower tech-complexity the better?

19
How to Make Different Cultures Have Different Naming Styles, But a Common Language Between Them Believable?
9
How can I name tribes to show the formation and development of cultures?
12
How to move on as a society without a common language
20
How to force a country to use a language that merges two languages that diverged 1000 years ago?
44
How to avoid the language barrier when there is no time to learn the other language?
31
What event would cause a huge, dominant nation to adopt the language of a smaller, inferior one?
20
How to make a language evolve quickly?
11
Reasons to not use the "Language of Magic" as a common language
2
What events would trigger linguistic hyper-evolution in a spacefaring civilisation?