How does weather affect the space laser's 'beam'?

I'm ready to fire my death-ray laser on the tank as in this question. It is an orbital death laser.

But it's foggy and raining in Wales (as always) where the tank is. Would the rain, electricity in the air, and/or fog have an effect? Could it be distorted in anyway?

Yes, the efficiency of the laser would be affected. Inevitably, some of the photons that make up the laser beam will hit the water droplets in the air, instead of their intended target. Electricity would not affect the beam as photons have no charge. Wind would not either, as photons have no mass. However, since we are talking about a powerful laser capable of damaging a target on the planetary surface from orbit, clouds, rain, fog would have a negligible effect on the laser beam. Think about how difficult it is for a human to walk outside in a foggy day - hardly noticeable.

The effect of the water droplets would be more severe for a red laser, than a blue laser for example. Blue lasers are more energetic than red ones, so they would be affected less, but it would still be negligible in both cases.

Here's a picture of how a laser is affected by fog. Notice the scattering. 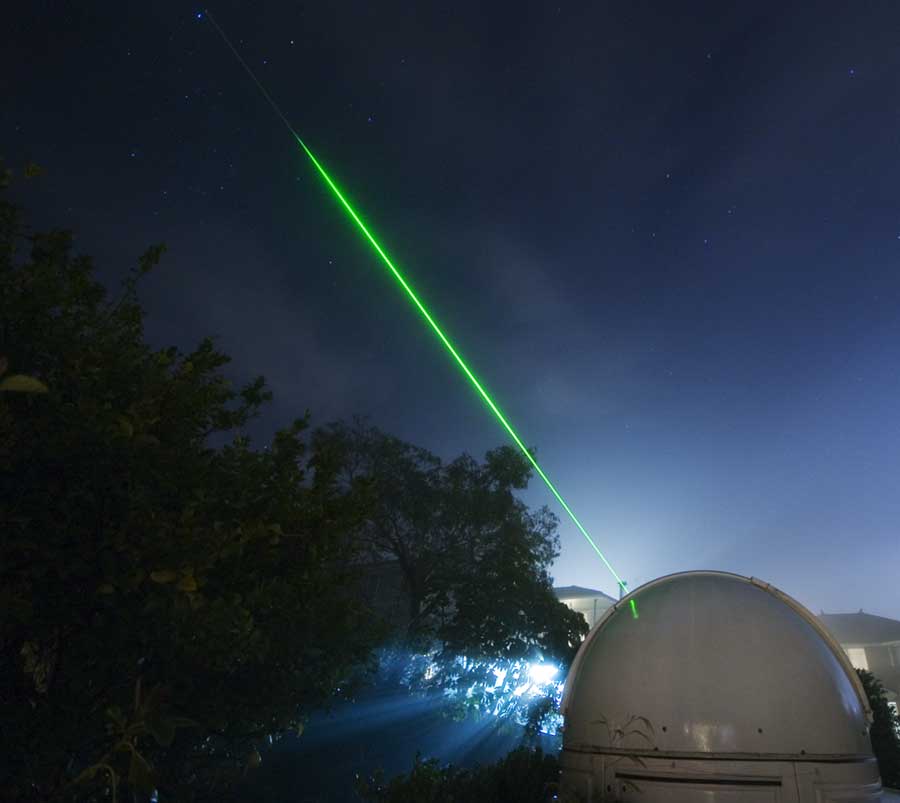 One weather event I can think of that might significantly affect such a laser is a tornado, which is powerful enough rip of houses and trees, which would absorb the laser's energy more than water droplets.

At high enough energies to be "interesting" (i.e. a lethal weapon) the energy of the laser beam will be absorbed by the molecules of gasses that make up the atmosphere.

The initial effect is simply to recreate a lightning bolt effect (the air rapidly expands, then rushes back into the low pressure pocket where the beam passed, creating a thunderclap).

As the amount of energy in the beam increases, the air molecules themselves will become affected by the beam, ionizing and creating a plasma. Sadly for you, the plasma has the effect of absorbing the laser energy in a positive feedback effect, until the beam energy is blocked and no more energy hit the target. The plasma will actually flow up the channel towards the beam emitter, which would be disastrous in a mount inside the atmosphere, but we can safely assume the plasma bolt will dissipate somewhere in the high upper atmosphere.

As an aside, Leik Myrabo spent many years experimenting with the use of lasers to power spacecraft and aerospace vehicles, and used this effect to his benefit. Some of his designs used pulsed lasers shining into parabolic mirrors, which focused the laser energy to the point that the air underneath the vehicle "exploded" and provided the pulse of energy needed to lift the craft. Doing this multiple times a second provided the energy to lift these small craft.

The effect of air absorbing the laser's energy limits the use of laser weapons to rapid pulses, and designers will need to "tune" the frequencies of the laser to avoid the energies that will preferentially interact with common atmospheric gasses like nitrogen. This may limit the use of lasers in the atmosphere to relatively unprotected targets; you won't be able to deposit enough energy on a tank in a short enough time frame, but you can shoot down missiles, artillery shells and even the helicopter or UAV firing the missiles or spotting for the gunners. Ships at sea can also be protected by a "no go" zone which enemy incoming munitions would have to pass, thinning out all but the densest swarm attacks and giving point defences a much better chance to protect the ship.

Not the answer you're looking for? Browse other questions tagged weapons weather .

10
Effects of an orbital laser cannon

6
Magic Ship Armor Causing Fog
7
How would a large arctic mountain range affect the weather?
0
Could I control plasma from a distance?
6
Could an earthquake alter weather over the long term, and therefore climate?
4
How to make glowing rain/mist?
4
How big of a fire do I need to create a hurricane?
9
Are handheld electric weapons realistic?
5
How Precisely Can a Space Cannon be Targeted?
4
Can electricity magic give someone the power to make it rain?
5
Creating fog over the ocean and large island using electricity and..?