What's a macroscopic chemical unit as a scale for alien communication?

Let's say we're composing a message intended for radio transmission to intelligent alien life. We'd like to talk about sizes and distances, so we'll need a unit of length. We're already planning to use units based on radio waves and astronomy, but for redundancy, our scientists would like to use something from chemistry as well.

Is there any measurable distance known to chemistry that is macroscopic in size (around 100 µm or bigger) that could be used as a unit of measure? 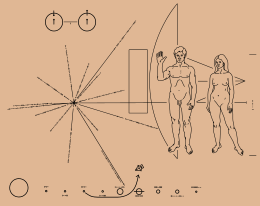 The symbolism is done in multiple layers, since the people who created it had no idea of who or what might recover this plaque eons from now (even our remote post-human descendants might not recognize what this is at first)

The two "bubbles" joined by a line represent Hydrogen, and the symbology represents the number 1 (the atomic element Hydrogen), while the joined line represents the transition of Hydrogen in a "spin-flip" transition (i.e. spin "up" to spin "down"). In physics this can be represented as a unit of length or time (the 21cm wavelength of atomic hydrogen, which can be observed by radio telescopes anywhere in the universe, and the frequency of 1420 MHz)

Other symbols include the position of the Solar System relative to various pulsars (the dot in the centre of multiple dashed lines) and a pretty obvious scale comparison of the builders to the Pioneer probe itself.

For comparison to molecular size, you will have to establish some sort of constant which is observable throughout the universe and is easy to figure out. The Hydrogen one is pretty straightforward, using a molecule becomes difficult unless it is a fairly:

a. simple one, like a Benzine ring, and; b. observable in sufficient quantities to stand out via radio telescope.

Hydroxyl (HO) is often suggested for this reason, and water (H20) is also very common. Various forms of alcohol and even amino acids have been observed in molecular clouds, but as complex molecules the symbology might be open to various interpretations (The Earthlings said what! This means war!).

It might be simpler to code everything in multiples of a simple unit instead.

It's a radio transmission. What do they have as a reference? The wavelength you are transmitting on!

Don't worry about scale. Describe things you can communicate, and use multiples or divisions as needed. Realistically, you would describe several different things and besides giving them a chance to recognise some first, it then provides a check on the meaning if the other parts make sense as more items with measurements that the reader can then figure out.

Yes, indeed the 28Si sphere kilogram is not only a measurement of weight that weight is known because of its diameter is so precisely known. But any crystal of known bond length and number of atoms would work.

A diamond's bond length is 154 pm so a diamond a 100 billion carbons wide is exactly 0.154 meters across. a galactic centimeter.

If the Aliens don't get that they are too dumb to talk to. after that you can tell them the formulae for linear molecules on from then length. Although using wavelength would be a simpler and more elegant solution.

Not the answer you're looking for? Browse other questions tagged communication chemistry .