Effects of an orbital laser cannon

Imagine somebody puts a laser cannon in orbit. For my question it probably won't matter if it was a Bond-style villain or invading aliens. This laser cannon is powerful enough to destroy a tank on the surface of Earth, or perhaps even a bunker.

What would an observer on Earth see?

Humans have successfully built lasers from microwave frequencies to x-ray frequencies. Some of frequency ranges wouldn't penetrate the atmosphere (e.g. ultraviolet-x-ray). Other specific frequencies (e.g. 9-13 $\mu$ wavelength for $CO_2$) are absorbed by the atmosphere's constituent molecules.

Under ideal conditions for the laser, the beam won't be absorbed or reflected by the atmosphere. That means the only thing you'd see is a literally blindingly bright spot at the target.

If a human with unprotected vision looks at the target during the shot, there is a good chance they will be permanently blinded. If a human with unprotected vision is in LOS but not looking, there's still a chance they'll be blinded by reflected light. The effects of the atmospheric plasma will be exactly like lightning (sight & sound). The stroke will be perfectly straight and visible even during daylight. It fades from visibility almost instantly even at night. For a <1 sec duration shot the angle change will be <0.5 degrees - so no noticeable fan shape to the shot. 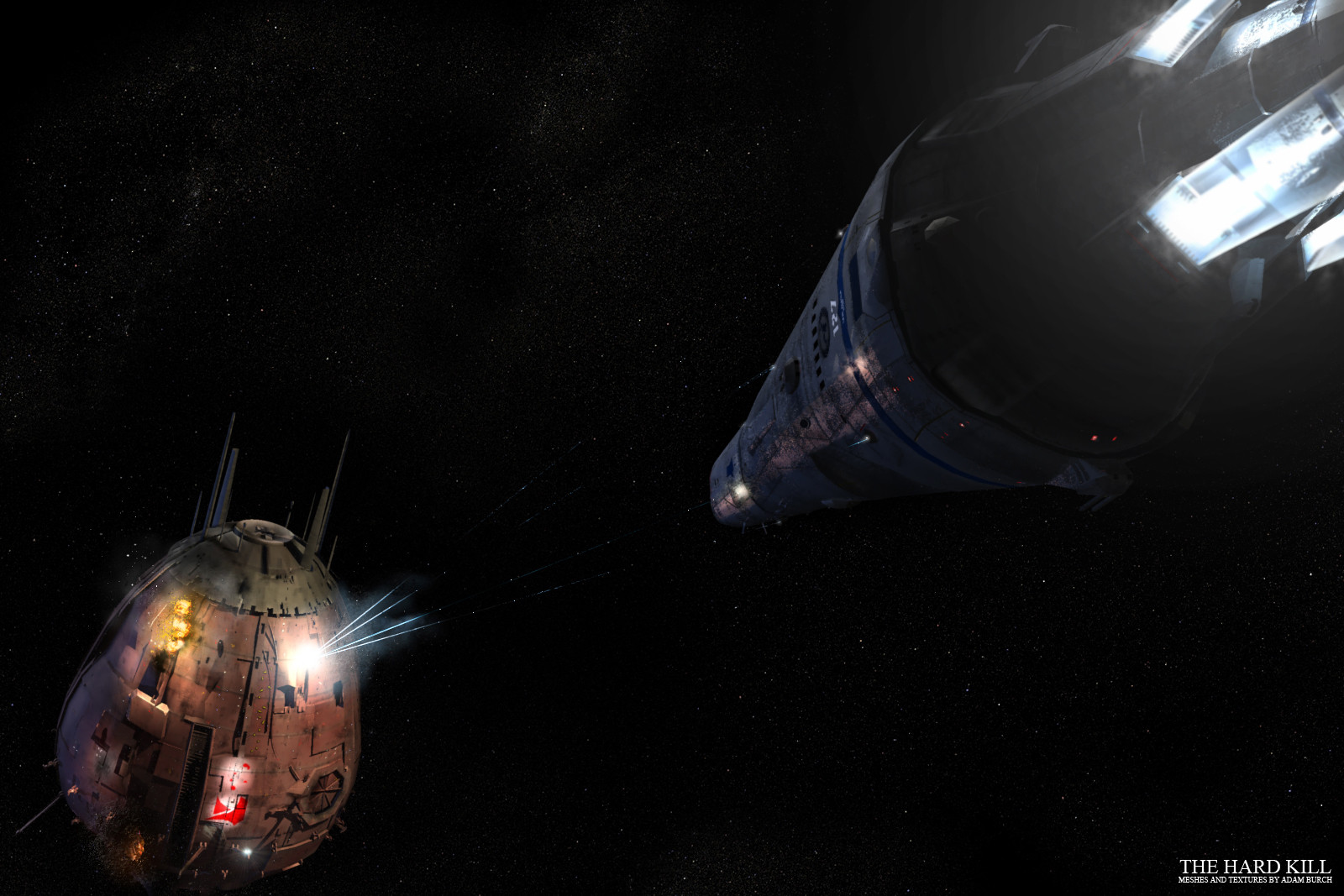 Anyone able to see the target (whether looking or not) would be in extreme danger of permanent vision loss.

Due to the difference in emissivity between the plasma and surrounding atmosphere, the plasma acts as a waveguide and channels the beam. Since the plasma is a just super heated gas, that gas will move around due to normal gas dynamic forces such as wind and convection. Which means that even with perfect aim, targeting, and beam director stability, your beam will wander around and hit objects near the target.

The required beam dwell time depends upon how powerful your beam is. It's possible to incapacitate your target through lower powered, long dwell time heating shots. It's also possible for your beam to shatter or drill holes through targets using pulsed lasers. The sudden deposition of large amounts of energy in a very short period of time vaporizes a portion of the target's armor and creates a shockwave in the armor.

Even for the lower powered longer dwell time lasers, we're talking seconds to maybe 2 minutes of dwell time. In 2 minutes a laser satellite in LEO will move approximately 500 miles which equates to about a 55 degree change in incident beam angle (about 1 degree change / 2 seconds).

The US military attempted to shoot an orbiting satellite with it's Mid-Infrared Advanced Chemical Laser (MIRACL). This laser is a 1-2 MW Deuterium Fluoride laser. I believe an orbital laser to destroy a tank would need to be at a minimum this powerful and probably something like 10x or more powerful.

For very high intensity short duration shots, the beam would appear as a perfectly straight stroke of lightning and sound like one too. If the shot managed to explosively destroy a tank or bunker, you would get that detonation sound too. 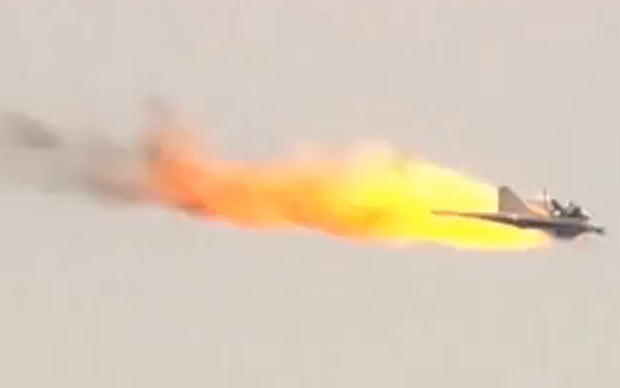 Note that you can't see the beam indicated that this is a "lower powered" beam incapable of shattering a tank.

...about laser weapons can kill you. Nearly every laser technology has very low efficiencies. Most of the energy you pump into the laser gets turned into heat. Getting rid of waste heat in a laser weapon is going to be a big problem. In space, it's going to be a worse problem.

Note that laser cannon are notoriously inefficient. Free-electron lasers have a theoretical maximum efficiency of 65%, while others are lucky to get a third of that. This means if your beam power is 5,000 megawatts (five gigawatts), and your cannon has an efficiency of 20%, the cannon is producing 25,000 megawatts, of which 5,000 is laser beam and 20,000 is waste heat! Ken Burnside describes weapon lasers as blast furnaces that produce coherent light as a byproduct.

From the Laser cannon section of the Atomic Rockets website (a must read for every world builder) - from a section on laser damage during a space battle.

A single pulse with a total energy of 100 MJ would have the effect of the detonation of 25 kg of TNT. Everyone in the compartment who is not shredded by the shrapnel will have their lungs pulverized by the blast.

That same 100 MJ delivered as 1,000,000 pulses of 100 J each could very well drill a hole. The crew see a dazzling flash and flying sparks. Some may be blinded by the beam-flash. Anyone in the path of the beam has a hole through them (and the shock from the drilling of that personal hole could scatter the rest of them around the crew compartment). Everyone else would still be alive and would now be worrying about patching the hole.

Although it occurs to me that the jet of supersonic plasma escaping from the hole being drilled could have the combined effect of a blowtorch and grenade on anyone standing too close to the point of incidence, even if they are not directly in the beam. The effect would probably be similar to the arc flash you can get in high power, high voltage electrical systems, where jets of superheated plasma can cause severe burns from contact with the plasma, blast damage from the shock waves, blindness from the intense light produced, and flash burns from the radiated heat.

A continuous beam could have enough scattered and radiant heat to cause flash burns to those near the point of incidence, along with blinding those who are looking at the point of incidence when the beam burns through. If it burns a wide hole, people die quickly when the compartment explosively decompresses, throwing everyone into deep space. If it burns a narrow hole, the survivors who can see can just slap a patch over the hole to prevent the escape of their air.

Not the answer you're looking for? Browse other questions tagged science-based reality-check weapons .

51
Pew Pew Lasers! What would directed energy weapons actually sound like?
6
How powerful does an orbital laser cannon need to be?
2
How does weather affect the space laser's 'beam'?

6
How powerful does an orbital laser cannon need to be?
11
Could it be possible to build a Pew Pew Laser?
8
How much heat/energy would be needed to turn a large section of desert sand into glass?
8
Effects and feasability of a modern-day Olympus and Hephestus
6
Stellaser Part I: Trial by stellar Fire or The best design out of three for a solar powered 5 Petawatt laser?
3
Is a gigantic laser facility with a reflector network as defensive system plausible?
7
Space Combat Depiction 1: Laser Pew-Pew
9
Does the beam quality factor M2 really ruin long range laser warfare in space?
6
Are laser-stars the better missile carriers in space warfare?
3
Feasibility of Gundam's GENESIS