Sci-Fi: Can a Steampunk World be possible? [closed]

I have been wondering, can a Steampunk society(Steampunk as being powered by mainly by steam, but that doesn't mean other types of energy cannot exist, just that it isn't as popular) be possible in our universe/timeline? If so, how? If not, please explain why. I prefer detailed explanations, no matter the length. Thank you.

Note: This question has been edited to be more specific.

There is no reason not to, so long as steam can outperform competing systems.

Indeed, with different starting assumptions, it might be possible to have a proto steampunk world as far back as 1 AD, when Hero of Alexandria was experimenting with low pressure steam and atmospheric engines. A "book" was written, describing many different machines, but the prevailing attitude of the time was that machines were little more than toys and "special effects" for theatres and temples (an automatic door opener is one of the machines described).

The next possible start date would be in the late 1700s or early 1800s, when devices like the Jacquard loom pioneered early forms of automatic control, and devices with interchangeable parts were becoming common. The Babbage Machine represents the foundation of computer science, which provides another potential starting point.

The disadvantages of steam power include the danger of high pressure steam, low conversion efficiency and lack of portability. Steam powered factories had one very large steam engine at one end of the hall providing power to multiple drive shafts on the ceiling, which in turn drove pulleys for drive belts running down to the machines below. A computer server room full of Babbage machines would resemble this: 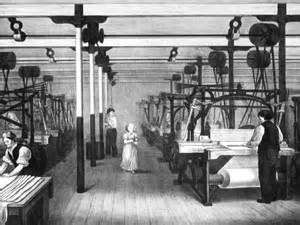 In OTL we know that steam powered machinery is large, and not very scalable for smaller applications (steamships and steam locomotives, rather than steam cars and steam airplanes). The final generations of steam engines that were capable of powering cars and airplanes were developed in the early 20th century, after almost 300 years of development. Internal combustion engines were simply lighter, had higher power to weight ratios and more convenient for mobile applications, and small electric motors attached to each machine was much more portable and flexible than a central steam engine.

Alternatives like compressed air, clockwork etc. also have disadvantages, mostly relating to energy density. Leonardo da Vinci's clockwork powered car was only capable of moving a few 10s of metres in modern reproduction, and the Girandoni air rifle had a maximum range of 125m, which rapidly declined as the reservoir was depleted. (It also took 1500 strokes of the hand pump to recharge it, to give you an idea of the energy required).

So a Steampunk world is quite possible, but will be very centralized, large and in important respects, very slow.

I wanted to add a comment about this, but its a bit more that I do have to say... You want to know where any *punk could be valid forms of technological advancement? Just pick up the timeframe it would be located at... like the 19th century for steampunk, renaissance for clockpunk and so on, and remove whatever was used for technological advancement.

Sounds pretty simple, doesn't it? So want to keep a society working with steam for a long time? What did come after steam-power? Internal Combustion. So if there is no oil at the world of choice. Or at least it could be so hard to reach, that the few samples people could acquire are used for something less consuming than personal transportation. So they will stick with steam and use their yearly production of 10 barrels of oil for doing... uh... I dunno.

Same may work for Clockpunk, but you would have to talk away stuff like gunpowder. Want nifty repeating crossbows? No gunpowder! Want them to stay in clockwork-industry forever? Remove coal, or make it as hard to access as oil. But still they could make charcoal, so you may need sentient creatures which will die when they come into contact with to much coal burning exhaust.

You may apply this to other *punks too, but one thing I do not get at all: why you ask for universes, where this could exist? There is no need of a special universe for this, except you can create one where oil is a pretty bad energy source. But... no.

We are currently primarily steam powered, but we keep our steam far away in power stations and transfer its power by electricity rather than shafts and belts.

This of course is not how everyone thinks of steampunk, it's too clean and neat. Not "punk" at all. What you're looking for is dirty, localised, small scale steam power, the real punk.

There are two technologies we need to take away: HT powerlines and internal combustion engines.

This means you can no longer have centralised power generation and distribution, but we'll need to keep electricity for later. We need to get rid of internal combustion because otherwise nobody would know it was steampunk, personal transport is a key aspect.

Transport: The first problem for steampunk is this: Electric cars (1834) predate IC cars (1885). As much as I keep trying to make it happen in theory, the traction engine (1850) does not evolve into the steamcar, we go straight to electric. Luckily this only applies to personal transport, the steam wagon did happen and that's what you need to build from. Given suitable investment and time, this could potentially develop into a viable long term form of transport. What you need is high pressure gas powered boilers, a closed steam cycle so you don't need to take on water all the time, and for really heavy loads, an equivalent to the diesel-electric engine (look at the size of that thing, it's no 2.0 TDI).

The modern age and our toys: The key to making this happen is localised power generation. With the best steampunk will in the world, neither your computer nor your phone is going to run on coal. Your office however will. You can have a boilerman who is responsible for the power supply (and heating) for your office building, he comes in early, stokes up the boilers and gets the building ready for the day's work. There's no reason for most industry to suffer all that much, it ran before centralised electricity, it'll run without. You could also have localised residential power stations, but on the whole, electricity, and with it personal transport beyond the bicycle, is going to be a luxury for the wealthy.

In summary: Yes, but the air quality is going to be terrible. Choking smogs and thousands dying from the bad air every year. Personal use of coal was banned in the UK for a very good reason.

Recent work shows that Babbage's difference engine did work as drawn using the manufacturing materials and tolerances of the day.

With better management, continued funding, and popularization, it might have happened.

The big question is why? What would they have used automated computing for, and how would that drive commercial development of it?

I'd also like to point out that a few decades later there was a big growth and maturation of mechanical computing. Desktop printing adding machines were a reality, as were cash registers. So were targeting computers on naval ships!

Electric motors go back to the 1830's. If the commercial release of Babbage tech kicked off in 1830, it would be supplimented by small motors rather than being purele mechanical, and could use electric drive shafts rather than direct power-take-offs from steam, wind, and water. Since adding machines came along in 1851, I think we did follow that history, losing only 15 years or so from what might have been.

The question remains: what if computing/automation was in widespread commercial use earlier. What would it be doing that needed huge server farms, more complex logic, etc.?

Not the answer you're looking for? Browse other questions tagged steampunk or ask your own question.

28
How can I make steampunk airships less flimsy?
2
Fall of steampunk
4
Is a steampunk style Clockwork robot possible?
3
Medieval weapons in a steampunk world?
3
Steampunk Architecture
27
How do I use weird bouncing magic to power my society?
5
Combining Wingsuits and Steampunk