Would a bird/marsupial make a good pack animal?

These creatures are a mix of a marsupial and a bird. It has a stronger frame than birds on earth, and are very large. These birds are inspired by the extinct moa. They are hunted by thunderbirds and Griffins, and run along the ground. Females carry their eggs in pouches on their sides, along with food. Males also have pouches, but they only carry food. Males can carry about 100 lbs., while females can carry twice that much. Their wings are used primarily to cover these pouches when full, so as to prevent spoiling of the food inside. Males and females bond for life, and these birds normally travel in small herds of 3-6.

(I want the females to be able to carry an average human male.) With their large size, and potential carrying capacity, would these creatures be suitable for use by humans? Would the fact that they're birds be a deterrent?

For all of those who are interested here is some history of my world. There is no evolution of mythological creatures, although they have adapted slightly to survive.

A long time ago, the sun began to grow distant. The people of the time feared for the safety of their world, so they convinced the great wizards to undergo the great reformation. The planet was reformed using magic, and it could now sustain life indefinitely. However, all the Wizards perished due t the great duress they underwent. They were also not able to protect all the creatures, so some got thrown together, and many new creatures and plants were created. Hence the existence of unicorns, griffins, dragons, etc.

The bird should have no problem carrying people. People ride ostriches and even race them 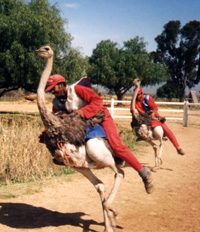 Now compare the ostrich to the Moa and you have a much larger bird. 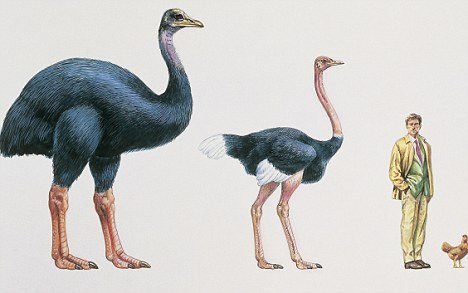 Assuming that the birds are trainable, I see no reason that they couldn't be used by humans for transportation. (I am assuming you mean ride them on the ground, not flying).

Oh, and as far as the pouches are concerned, they are just a moving 'nest', since it is 'safer' to keep the eggs and young on the move from predators. This would be one of the pluses to domesticate them, and use them as pack animals.

This could work. We can ride ostriches and these birds should be able to do the same without issue. Something to consider is if these are tamed (wild animals that have been made subservient) or domesticated (we have been breeding them for generations to suit us better, e.g. less aggressive). It would make sense if we bred them to perhaps be stockier, in order to carry more or to be more athletic, for greater speed. This could make it more feasible, as we've been doing this with horses for millennia.

As a quick extra, you could have designated pouches for food and young. Male penguins can store food in their stomachs and preserve it with a special enzyme, turning the fish into "fish jerky", allowing it to be stored for extended periods.

Not the answer you're looking for? Browse other questions tagged magic creature-design fauna .

15
Evolution of a tree-based predator that threatens to kill/eat prey unless prey feeds it?
6
Love and Betrayal on the Abyssal Plain -- can Slavery be Happiness?
8
Are my wing-walking griffins viable?
12
Is there a reason for a humanoid species to be 'biologically' matriarchal with females being slightly more dominant than the males?
2
Why would a male marsiupial agree to accept responsibility for carrying half of his mate's joeys?
0
Could my Cipactlis exist?
5
Are my "ZW humans" plausible?
5
How would griffins collect materials for their nests?
12
How could a creature make its feathers or hairs glow?