In previous questions on this topic, I've devised a genetically-diverse creature that uses a cold fusion internal engine to provide tremendous amounts of short-term (sprint) energy.

However, there have been several concerns raised about such an internal engine. So I am asking the community, what would be the best solution to the problem of sprint energy?

As a starter for ten:

Sugar is actually pretty darn good. It diffuses well, can be broken down immediately by cells needing a boost, and it's pretty simple to get hold of.

If your hypothetical creatures have 'sprint cells' (like the exact opposite of fat cells) lining their cardiovascular system that contain high concentrations of a glucose syrup/oxygen/adrenaline mix (built up over time), then when they're in need of a boost a special hormone/chemical can be released into the bloodstream. This chemical would cause the walls of the sprint cells to break down, releasing huge amounts of sugar (which cells need for high performance), oxygen (which cells need for high performance) and adrenaline (or something similar).

The advantages: Instant high energy, a feeling of heightened alertness, crazy strength (adrenal surges can do really weird things), and a general feeling of invulnerability. This also scales at the same speed as the cardiovascular system of your creature and can be 'tuned' for varying energy release patterns based on hormone strength/number of sprint cells etc. 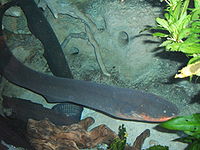 There are existing biological power sources that your DNA chimera could use to "power" the muscles, like the organs of an electric eel. The organs could produce electricity and provide an electric shock to stimulate the muscle. Multiple organs could be fired in sequence to provide a sustained burst over a period of time.

I remember a lecturer a while back talking about how frogs have a different type of muscle in their legs that is really good for fast movement. (White muscle maybe? it's been a long time.)

Since your creature has multiple DNA types, it's believable that it would have different types of muscle, possibly layered on top of each other. The normal "red" muscle would be used for normal movement, and the "white" fast twitch muscle would be used as a speed and strength enhancer when needed.

5
What would be the short-term and long-term effects of an increase in the strength of gravity on humans?
7
Internal, organic cold fusion engine
4
Organic Thermoelectric Phase Change Material
5
obsidian/flint like substance of organic origin
2
The chemistry of a long living (alien) animal
3
Organic prosthetic limbs