'star factory' that a planet orbits?

I am working on a novel of a fantasy world on another planet. I am not too concerned with scientific accuracy, as again, it's fantasy, but I am not interested in supernatural things for my world. That is, there is no magic in my world, and all the phenomena is natural or organic.

That said, my idea was to have my planet orbiting not a star, but some kind of "star engine" construct, composed of some kind of fantasy mineral/element that only exists in my world that births stars in the manner of a flowering plant. The solar energy would then be absorbed by another sort of material orbiting the planet, some kind of fantasy rock/asteroid chain that safely filters the radiation.

The idea would be that a sort of microstar is generated, absorbed, dispersed on the earth in various ways (some kind of storm/explosion) and then somehow reborn in a cycle, perhaps from a kind of 'pollination' process that is both organic and contributed from the (fairly ancient/medieval/non futuristic) technology of the inhabitants.

So therefore, there's no 'sun' or main star, and no daylight/seasons like there would be on a conventional planet orbiting a sun like star. There would still be seasons, but they would be based around the 'starbirth' of this hypothetical star engine that my planet rotates around.

I would assume the magnetic field of the planet would not be conventionally dipolar but would be more chaotic, but again this fictional mineral rocky chain would help to keep radiation from destroying life (most of the time - there'd be storms of course).

I would like all of this to follow some internal logic and not chalk it up to magic or gods, as there are none. I am not averse to inventing materials/minerals/systems etc., like I said above to explain them. My question is, is this feasible and how far would I go to invent constructs that ensure the planet can harbor life in this fashion?

Say it's a factory that takes hydrogen and creates fusion.
If the machine had a nebula with lots of hydrogen or a gas giant near by, then automated machines could collect it and bring it back to the factory.

The micro stars could be machines too, since anything that small would not be able to generate fusion on its own.
You need something a lot bigger than Jupiter to even get a red dwarf.
They would be fueled and charged by the factory, and then travel to the planet to start the fusion process to create light and heat.

Could life exist there?
Sure, but it might be seeded, since the sun factory is artificial, everything else could be to.

What would it look like?
Swarms of miniture Sun's traveling across the sky. If they weren't organized then day and night would be chaotic.

Alternative: just for fun
Ok, so going way the other direction, it could be an actual Plant.
Say it's a rogue planet, and at one point the planet was mostly ice. Somehow (panspermia?) a seed lands and begins to grow. It's basically a beanstalk space elevator, growing way out.
It also puts roots deep down to hold it in place and to harness the planets geothermal energy. (thanks Tim)
As it grows it begins to thaw the ice and break it down, liberating the oxygen, and burning hydrogen to create heat.
It might not even be fusion, just burning enough hydrogen could warm things up, especially as atmosphere develops to hold the heat.
At some point it grows tall enough to effectively be in orbit, and then proceeds to wrap around the planet as a living ring, still rooted on the planet, and still freeing oxygen, burning hydrogen, and creating heat, warming the planet up until it has a viable atmosphere. Also removing a lot of the water from the surface. Some of the burning hydrogen would reform as water and fall back to the planet as rain, giving a weird water cycle.

Life could develop the normal way, or the seed could be a terraforming engine, releasing life forms as conditions allow.
First single celled things would be released to prepare soil, then lichens.
The plants would be released next, followed by low level life like insects. Eventually higher level life would be released, and then intelligent life when the planet was all ready for them.
It would be similar to the way things develop naturally, but a lot faster. Thousands of years instead of millions.
The intelligent beings may or may not know how the world became the way it was, though the Plant could have a library that they would be able to find if they thought to look, which could be interesting...

It's a fun idea anyway.

If you aren't averse to getting a little extemporaneous with the science, and you don't mind playing to a common trope:

The common trope here is that white holes 'spit matter out' where black holes draw it in. In your case: This white hole spits out clumps of superheated plasma that are too small to undergo fusion on their own, but already have the left-over energy from the star they were before being absorbed into another black hole. Handwave a little about why the plasma comes out in discrete lumps rather than a constant stream (curved magnetic fields at the event horizon, time being fubar near singularities, it doesn't really matter) and you have an entity that periodically spits out a scorchingly hot object that radiates like a star for a while before cooling.

If you add in a kinetic component to the expelled matter (preferably perpendicular to the orbital plane to avoid the possibility of collisions) and your white hole's axis is similarly perpendicular, you avoid the majority of nasty radiation effects, and you can have a (fairly complex, but still bipolar) magnetic field for your planet.

Depending upon the regularity of the 'stellar' births, how long they stay hot for, how fast they're moving when expelled, and whether the stars are expelled symmetrically or just from one pole of the white hole, you can set up an awful lot of different scenarios for your world. Long, unpredictable winters, constant periodic summers, day on one side of the planet but constant night on the other. All of these are options.

Sadly this doesn't lead to the micro-stars dispersing in the planet's atmosphere (unless you like constant firestorms). They just drift off into space. Also white holes (even theoretically) don't operate like I just described. That's the handwavy bit. But you are handwaving into a popular sci-fi trope, and people will understand what you're getting at without you having to resort to gods.

Real "star factories" are something to watch with wonder from a great distance away.

In the spiral arms of our galaxy, nebula of gasses and dust can be collapsed by the impulse of a nearby supernova. The high energy photons ionize the gasses and the shock wave and plasma containing the heavy elements formed when the supernova's core imploded provide both the impulse needed to collapse the formerly stable body of gas and dust, and seed it with heavy elements useful for making things like planets.

The nebula will collapse into multiple pockets of higher density, which then become even more compressed as gravitational attraction between the particles rises, leading eventually to enough compression that nuclear fusion reactions take place. Voila! A star is born! The energy of the new star clears gasses from the newly created solar system, and also serves to push more gas and dust together in other parts of the nebula, creating more stars, until the nebula is consumed or the density of the gasses and dust becomes too low for further star formation.

Closer to the galactic core, an even more impressive star creation engine exists: the central black hole known to be at the cores of most galaxies. When there is a great deal of matter in the vicinity, it forms a massive accretion disk around the central black hole, and the rapidly spiralling gas becomes heated to such an extent that it is radiating in x ray frequencies near the event horizon. The rest of the disk is glowing more brilliantly than any star, and is the central engine of quasars. 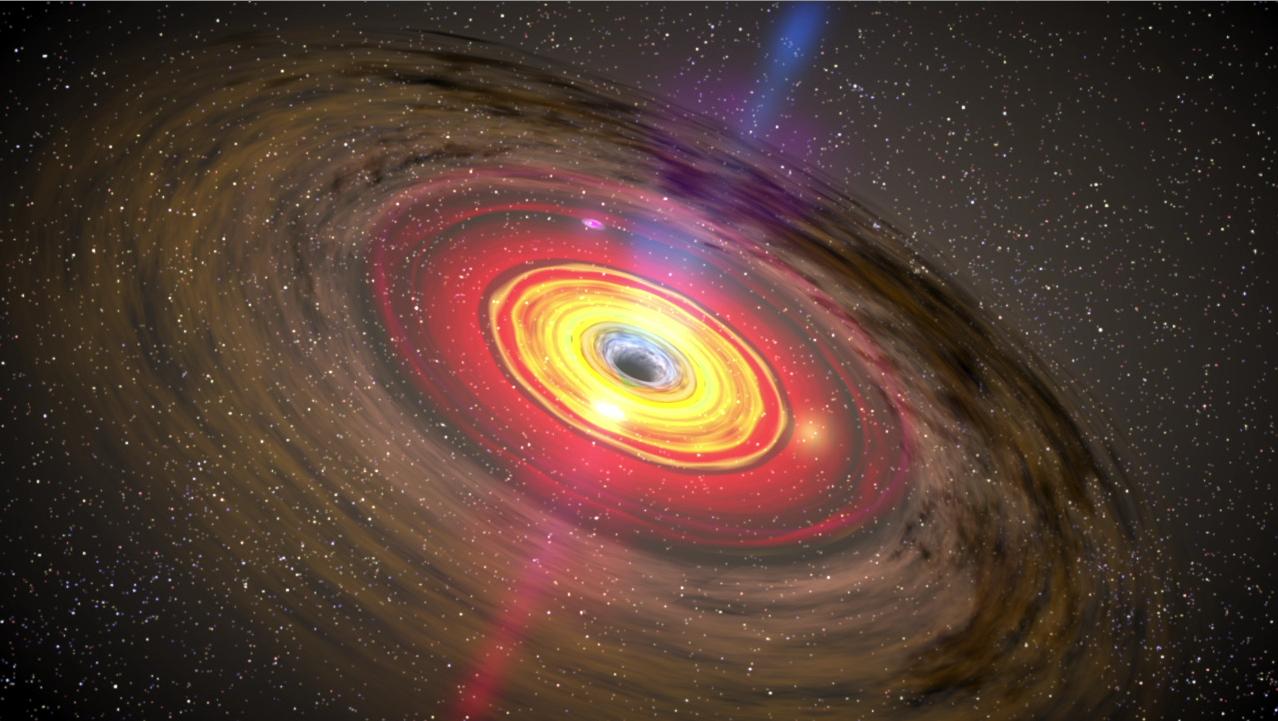 However, the quasar soon consumes most of the available matter, and the central black hole becomes quiet. Over a few billion years, matter flows back into the void and the quasar engine starts up again, only the shock waves and high energy emanating from the accretion disc slam into the gathering clouds of gas and dust and replicate the formation of stars, only on a vast scale. This is often known as a "Starburst Galaxy"

While this is far different from what you are talking about, being near a "real" star factory would be a glorious sight in the night sky as it rises over the horizon. Under some circumstances, it might be visible in the daytime, and would be very impressive at night. Too close and the radiation from the multitude of stars or the accretion disc would become an issue, but you could certainly be within a few to a few hundred light years away. 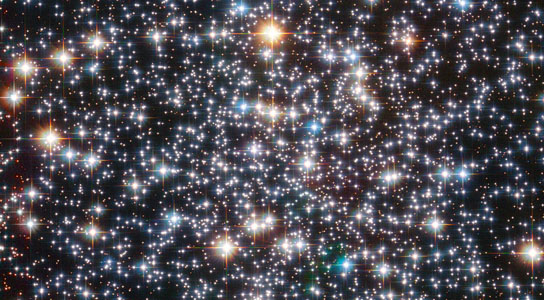 Not the answer you're looking for? Browse other questions tagged science-based internal-consistency planets astronomy stars .