What are the social and economic implications of giving everyone $4.33 million?

This meme became infamous today due to its creator's apparent inability to do basic arithmetic: 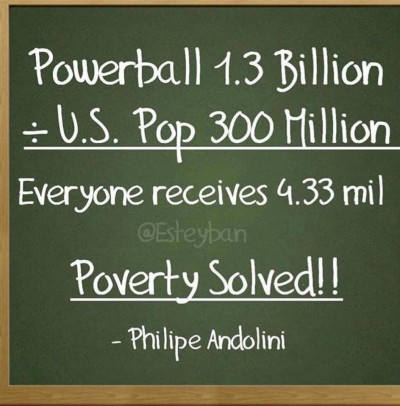 But concerns about the current state of mathematics education aside, what if the US government attempted to "solve poverty" by simply giving every man, woman, and child in the country $4.33 million? I doubt that even in the best case scenario would poverty be solved, but what might happen from a social and economic standpoint? What events would lead to the inevitable collapse, and what would life be like in the days and weeks following the release of the first funds?

Let us suppose that the money is distributed as a tax return, and is available as soon as the IRS begins processing tax forms.

The effect of hyperinflation is well documented, but you are probably interested in how this would play out for real. I was taught the following scenario in my economics class

In Argentina, during periods of inflation, people would simply run out at payday and purchase any durable items that happened to be close by. If you were near a shoe store, you bought as many shoes as possible, regardless of fit or style. If you lived near an automotive supply store, you bought car parts and so on. People's living rooms were filled with canned goods, shirts, fishing rods or whatever, and larger items filled the yards.

What was actually happening was people were converting cash, which had a declining value, to durable items with "real" value, and using them as a means of barter and trade.

Lets say you wanted to fix your sewing machine. You might find the repairman, but he has no need of your shoes. You go across the street and trade shoes for a table lamp, then take the table lamp down a block to get some canned tuna, then finally locate the dress shirt that the repairman wanted. While this is wildly inefficient, it is still better for all concerned than handing over a stack of Argentinian currency which will lose value in a very short period of time.

Indeed this may be starting today in economies where "QE" (Quantitative Easing) is taking place. Since QE essentially floods the economy with more and more money, without any increases in underlying factors like productivity or creditworthiness, inflationary forces are building. This was evident before the Saudi's started their current oil war against Iran and Russia, as ordinary people were being squeezed by rapidly rising prices for food and fuel (conveniently omitted from "official" calculations of the Consumer Price Index (CPI) and inflation). The reason QE and similar nostrums don't work is precisely because it ignores the underlying productivity and creditworthiness that drive the economy; you can extend more credit but you can't create more creditworthy borrowers.

Perhaps the only reason that massive hyperinflation hasn't crushed Western economies is that deflationary forces created by excessive debt are much greater, and the markets may be adjusting to the realization that government debts and unfunded liabilities like pensions, Social Security benefits and Medicare/Medicaid will not and cannot ever be paid off (the estimated total outstanding liabilities of Social Security is thought to be 100 trillion dollars, and the boomers won't die off until the late 2060's).

Where did this money come from? The only way I could think of this happening was if the US printed that much money for everyone. If that happened, it would devalue the dollar so much it would probably cause an economic collapse. I mean, look at Germany's situation post WWI. The country was printing to pay off its debts, causing the money to be nearly worthless.

I'm not a financial expert but I think it's obvious that if you give every single person millions of dollars (thereby massively increasing the supply of dollars) then the value of each individual dollar is drastically reduced. This scenario is known as hyperinflation and has occurred numerous times in recent history e.g. pre-WWII Germany, or Zimbabwe in 2007/2008.

If we look at the experience of Zimbabwe, hyperinflation became so high that prices of goods doubled every 24 hours and the banks were printing $100 trillion dollar notes. People had to take wheelbarrows of cash with them to the shops to buy basic groceries. Eventually the government had to abandon the national currency as it became worthless, and transactions are now conducted in a more stable foreign currency.

I will not speak about hyperinflation (since other answers do it very well).

One immediate consequence of giving everybody \$4.3 million is that everyone who had significantly less wealth than \$4.3 million will suddenly have approximatively the same wealth.

Knowing, according to the data gathered by wikipedia (bottom of the table), more than 75% of Americans have a wealth of less than \$500,000 (in 2013), that means that the 75% poorest people will all be (approximatively) as wealthy.

That is an effect, in my opinion, worth noting.

Smart people who have money would turn it into goods that will hold value before the giveaway occurred. Gold is the classic. In this scenario, basic provisions would be important. They will also concentrate on certain investments. This hoarding would get the inflation started.

Some number of people would quit their jobs. After all, they're millionaires now. Besides, why bother working if you're only getting paid, \$400 a week but have \$4 million? So even if stores are still only charging the lower prices, you won't be able to buy. No employees.

Owner-operated stores will adjust their prices to make it worth opening. Prices will skyrocket initially, but after a few weeks, I suspect that it will settle down. Some people will have blown their entire windfall and have to go back to work. Wages will have to adjust to fit the new prices.

Note that the total M4 money supply at the moment is roughly \$30 trillion. This would add roughly \$1.3 quadrillion to that. So a 4300% increase. Once prices settle, expect everything to cost forty times as much. In the near term, this will likely spike higher due to the labor shortage.

After a few months, everything would continue with new prices forty or more times as high as the old. Most people who were poor before this will be poor afterwards. Some rich people will be a lot richer. Others will be impoverished. Some middle class people may do exceptionally well. For example, owner-operated farms will be in good shape. Well, at least as long as they don't get destroyed in the food riots.

Realize that in the short term, with no employees, grocery supply chains won't be able to deliver food. Some people will offer to deliver food at gouging prices. They may well find themselves in danger from the starving. Particularly since the starving may find paying the 4300% premium to be gouging, even though it isn't. \$200 for a bottle of milk may be expensive, but how else do you pay a minimum wage of $400 an hour? Food will rot in fields unless foreigners provide labor to pick it and process it.

What about the government? Realize that they also are now underpaying their workers. Aid agencies may be begging people to come back. Perhaps the National Guard and military will be more responsive.

There will be a wave of corporate bankruptcies as companies can't fulfill their contracts (no employees). Pensions will be permanently impacted.

Our currency would become more like the Japanese Yen. No cents, just dollars. The top bill would increase in size. Perhaps a thousand dollar bill. Smaller denominations would become coins. I'd put the switch at everything \$20 and smaller would be a coin. A can of soda pop from a vending machine might take a $50 bill to purchase. Or more.

So technically "poverty" has been eliminated. Wealth hasn't as the very wealthy tend to own assets that track the market, they will remain very wealthy though some may well lose a lot as companies dependent on cash assets start to struggle.

You're now going to get a period of hyperinflation, but it's not going to follow the normal path of hyperinflation as the government isn't continuing to print money at that rate. It'll probably be a single big step up before stabilising at approximately 1000x the current values. Appropriate government policy could stabilise it there having destroyed most of the national debt in a single stroke.

The markets will be paralysed by fear, international currency trading will be suspended. People across the world who have over invested in dollar bound debts and assets will be bankrupted.

Ultimately a few of the mighty will fall, the poor will remain poor, but the very poor will no longer be quite so poor for a little while as their debts are gone. Cash assets/debts will be gone but those who actually own something (companies, land etc) will recover and life ultimately goes on.

It would have the primary effect of pushing a big reset button on the national economy. It would take a generation or two before the dollar was a trusted currency again, anyone trading internationally would be expected to pay in Euros or other suitable trusted currency.

This is of course all bluster and hyperbole, but fiat currencies are a mass delusion accepted only because we don't have a choice.

There's only a few trillion dollars of US currency in circulation, which isn't nearly enough. As many other people have pointed out, you cannot mint such a vast quantity of fiat money without causing devastating hyperinflation -- but could we get the money another way?

What if the we stole the money from the rest of the world?

Four currencies (EUR, USD, JPY and CNY) comprise nearly 75% of all circulating banknotes and coins within the public domain. [source]

How convenient! We'll only have to deal with the logistics of three new forms of currency. So, how much can we get? Even the most broad definition of "money" (which includes savings deposits, money market accounts, etc.) will net us about $75 trillion USD.

Considering the fact that the wholesale thievery of the entire world's money supply is still grossly insufficient to fulfill such a promise to our citizenry, I cannot, in good faith, suggest this course of action as a viable fiscal policy.

4
What would happen if inflationary currency was given to the people?