Transporting/storing information within the human body (other than brain)

This is for a science fiction story I'm writing. Are there ways to transport information like a book, or a computer program, within the human body (not in the brain)? Say, by storing the information using vaccination, and then to read back the information, perhaps doing a blood test...

The basic story idea being that transmitting information electronically has security risks, so the human body is used to store information... people get to whatever destination and then have the information read from their bodies. Johnny Mnemonic was basically this idea but with the information being stored in the brain. I'm wondering if there are other ways.

How far into the future is something like I'm describing above possible? Are there current technologies that can potentially do the above.

Thanks for any information.

EDIT: Thanks everyone for the great responses. Ideally I was looking for something that a living person could transport safely, so perhaps DNA is not a good option.

The story involves someone infiltrating and trying to take down a company that isolates itself electronically... the person goes in, carrying some type of 'computer virus' stored in his body biologically. What I was thinking was... in the future, perhaps biometric scanning will be more extensive... and perhaps during the company's standard biometric scan of people entering, the computer virus could be transported onto the company's computers. I know it's really far-fetched (reminds me of the Independence Day scene). Trying to see if I can make this plausible.

With regard to your edit of using the biological scanners to infect a computer system...

In the movie Gattaca people are identified every day when entering work by a blood/dna scan.
The protagonist takes a small sample of blood from the guy that's helping him and puts it in an artificial blister on his fingertip. Then he presses it to the scanner, which samples the blood in the blister and allows him access.

This is how you could infect the system.
With enough knowledge on how the scanner software works, you could create a retrovirus that would rewrite DNA in white blood cells with the scanner exploit and virus.
Inject the retrovirus into a test animal, and then harvest some blood.
Put the blood into a bubble of artificial skin on a finger tip, and then go to the location to scan it.
It doesn't have to pass the scan, just read the DNA. The exploit in the DNA could cause a buffer overflow, and write the virus to memory. The virus could then alter records giving you access to the areas that you want.
Then you just come back the next day and walk in like you own the place.

Edit:
With knowledge of how the scanner works, there is also the possibility of finding exploits to hack other kinds of scanners: Finger print, retina, etc.
Maybe a contact lens or something, though the amount of data that could be stored would be a lot less than DNA.

Edit 2:
If you still wanted to smuggle information out, you could implant something that looked like a pacemaker. Pacemakers use a wireless device to program them. Something similar could be used to write data to a implanted device, and since it's disguised as a pacemaker no security should pay any amount of attention to it. Even if they decide to x-ray you to see if you swallowed something like a drug mule.

Medieval Tatars had this way to transfer Khan's orders: they used to shave messengers heads and made tattoos on their head with text of message. After 1-2 weeks the messenger's hairs are grown, and message is hard to find. But this way of sending messages is quite ineffective.

With modern tech level i think it is better to use Radio Frequency Identification Devices implants: 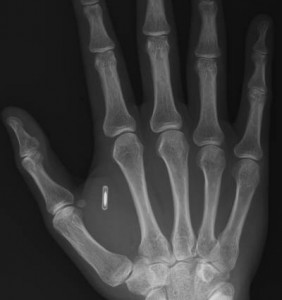 with current level of technology they can be made from conductive plastic, that is hard to detect by both metal detectors or X-rays. They can exchange data by radio frequency, and they start transmission after some sort of door knocking radio frequency transmission emitted by reader device.

UPD: it can be QR codes tattoos, probably made with invisible ink, that is luminescent in ultra-violet 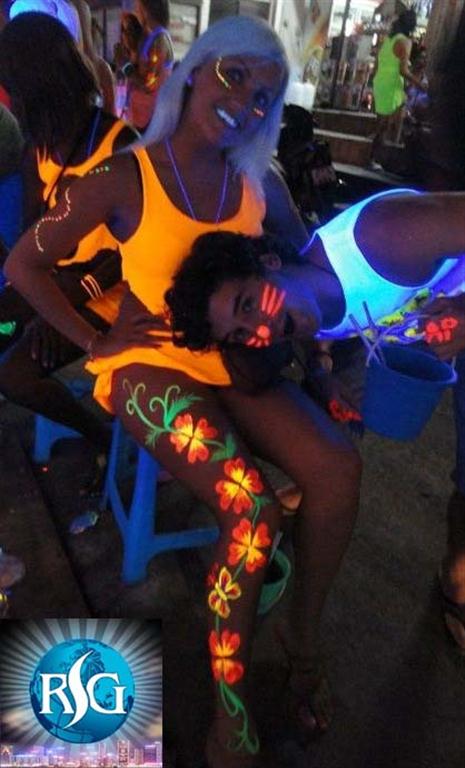 DNA storage has the potential to store petabytes of data and can last for centuries, possibly more if they come up with a good error-correction algorithm that works for DNA. If you want to transport massive amounts of data in a practically undetectable way (who's going to notice a few cells with unusual DNA? And even if they do notice, you can brush it off as a harmless mutation if you figure out some type of genetic steganography), DNA is a great alternative. Its long-term stability also makes it suitable for space probes that could be traveling for thousands of years before being picked up by an alien civilization.

The potential for its use in covert operations broadens if you use cadavers as your transport. Since you don't have to worry about the harmful effects of changing a large percentage of a person's DNA, you can store absolutely massive amounts of data in a typical corpse just by replacing some body fluid, say spinal fluid (blood is likely to be drained during examination or embalming), with a few ounces of bio-data liquid.

A low tech approach may be best.

Print the information you want to transmit on an organic material that can be safely stored within the body. similar to what a drug mule does. If the material is similar to a paper vellum (a vegetable product, usually cotton) , it would be nearly undetectable. If the message to be sent is relatively short, this would work well and be inexpensive.

People likewise have engraved very small (invisible to naked eye), texts. Text no more than 0.1 mm in height. Again, large volumes of information (GB, etc.) would not be easily transmitted this way.

A significant plus with these methods is that either no equipment would be needed to read, or just a magnifying device.

Microfilm is another common form of this same approach and has a lengthy history of use in spying, etc. it is quite effective, simple and cheap.

Slightly higher tech is simply to swallow the flash drive. Drives the size of a fingernail have quite a bit of capacity these days. Seal it up and swallow it like a drug mule.

I'd like to point out that the adaptive immune system stores information concerning which antibodies are kept on file to fight infection.

That can be used directly: blood tests can reveal past exposure, and distinguish the blood from identical twins.

So even without fancy encoding of taylored antegens for a message, you can use a low-bandwidth version based on a selection of existing things. Expose the person to a set of them, and the receiver knows the pre-arranged meaning.

I like the idea of DNA, but here’s my take on it. Encoding the information within the DNA of the person sounds both difficult and potentially dangerous, but if all you’re looking for is a way to conceal it on or in the human body, well then there are plenty of non-human lifeforms to work with.

I speak of course, of the human microbiome! This is mostly composed of the symbiotic bacteria, fungus, and micro-animals that are currently living in, on, and around you, every single second of every single day. And they are everywhere. Your skin, your saliva, your digestive tract, your hair, your armpits, everywhere. Did I mention they outnumber the human cells in your body ten to one? Think about that for a while.

Now that that horrifying realization has sunk in, here’s what I suggest. Take a species of bacteria that lives somewhere that’s easy to access (skin, armpits, mouth, nose) and create a virus that will infect the bacteria and over-write some of its junk DNA with your information. Re-release it, and if you made the virus infectious enough, it should spread to most of the other bacteria of the same type in/on the body. Because this is junk DNA, it shouldn’t harm it, just shuffle around some of the information it wasn’t using anyway. This should also be easy enough to do, because of the simplicity of bacterial genetics, since they’re such simple creatures. When you get to wherever you want to want to go, just take a sample of the bacteria, re-sequence the genome, and there’s your message!

I think that this would work fairly well because it’s pretty much impossible to detect. The bacteria are microscopic, and would already be present in a normal, healthy human anyway. The bacteria wouldn’t look or act any different, and the part of the DNA where you message would be would already be expected to be random gibberish that doesn’t actually do anything. the odds of the message being detected are incredibly low, given that to even know there was a message, you’d have to read the redundant DNA of a microscopic creature that has been there since birth.

All in all, I think it’s a pretty good way to store stuff. If you want some info on how we’ve actually already used viruses to change DNA, go here. If you’re just curious about your own microbiome, then you can go check this out.

Not the answer you're looking for? Browse other questions tagged biology data-storage or ask your own question.

43
What happens to a human who receives more information than the brain can process?
7
Genetically preventing a rebellion on a generation ship
2
Easiest way to turn my space colonists into savannah-adapted beings?
10
Could human beings evolve to have longer gestation periods? If so, how could this be done?
6
Xenobiology of extraterrestrial parasitic superorganism
5
Options for biological high-density energy storage within the human body
1
The chemistry of a long living (alien) animal