Is it scientifically possible to make a robot invisible to the naked eye?

Under currently known science, is it possible to make a robot of which every part was either made of a clear, non-reflective material (such as bulletproof glass, or plastic), or too small or thin to be seen with the naked eye?

It is, even if they are not too small for human eyes. Here are two approaches one can take:

Add cameras to the robot pointing in all directions and make the robot's surface one large display. Then the robot looks like you're looking through it. To hide the cameras, you could use optical tricks similar to one-way mirrors or metamaterials (see next answer). Here is an example to hide a car.

Certain materials allow electromagnetic waves to channel around an object, resembling the same propagation as if the object wouldn't be there. For an observer, the object (your robot) gets invisible. This does already work for certain wavelengths and simple geometries, and there's heavy research going on (especially military). More on metamaterial cloaking

You mean like these? In this case they're still just about visible but that was over a year ago.

"Would it be possible" has already been replaced with "what can we make them do?"

No, it isn't. At least not in the conventional sense of invisible. Robotics relies too much on metallic parts, which are opaque. Whilst some manner of theoretical lensing effect (metamaterial, gravity, handwavium) let's light skip around, the process of seeing requires light absorption.

Such an effect doesn't exist - there are a few techniques such as projecting a background image, but this is a very directional invisibility thanks to having 3d vision.

But we can approximate it - adaptive camouflage like a chameleon is viable. It isn't invisible, but is very hard to spot in cover, as it alway has the right camo pattern.

With smaller devices, you can combine being hard to see (by being small) with intelligent evasion, which would mean it could avoid likely places of being seen and hide if a light source comes near (many animals already do this, and as such are quite elusive, albeit not actually invisible).

As far as I know, not yet. Invisible by reason of small size would mean something like a quarter of a millimeter cubed. I don't think our technology is quite there yet (especially the battery or fuel cell that would be needed).

It is possible that they do exist and are top secret. Espionage would be a good reason to spend vast amounts on building them!

I can't see a fundamental difficulty because nature has mini-beasts on this scale. For example, you have about five million hair follicles and each is home to several demodex mites which wander around, choose their follicle, mate, lay eggs, etc. I have them too. All of us do. They're universal human commensals.

Edit: I just checked out the medical "bots" cited here. 800um is 0.8mm so not quite invisible and they don't carry their own power source. So I think my answer holds.

Been there, done that for a very long time.

Consider the amoeba. There are actually quite a few widely varied species that are amoeboid, the link above is to the actual genus.

It is far more sophisticated than the typical robot, yet it also has the ability to self-replicate. Amoeba protus is a common representative, average about 0.25 mm in size. This is essentially invisible under typical lighting conditions. Other amoebas are about to 0.02 mm in size.

We already have very small robots. But I assume you want something larger, like a human scale.

Simply have your millions of coordinated and communicating machines that would be like below, but instead of birds, they are machines so small, they're not detected visually by the human eye. 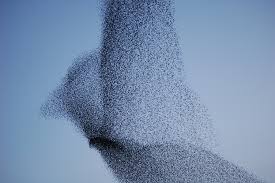 I have observed honey bees flying from their hives and they seem to suddenly disappear a few dozen meters away, even against a clear sky. If the robots are similar to this they can keep out of sight. They probably sound like bees too so if they travel at night nothing unusual would be noticed.

They could also have a small charge of explosive to self-destruct to prevent analysis.

Like bees, they could also have a "hive" to congregate in and plan their missions.

Note: Bees do not fly in swarms to randomly attack people as portrayed in films.

Not the answer you're looking for? Browse other questions tagged science-based technology robots invisibility or ask your own question.

6
What technologies could allow for individual scale invisibility and what are their caveats?
14
Glass rot - could we survive it?
4
Detection and response to building a giant robot under the Antarctic ice-cap
4
How could a very strong impact on a planet create deformations on the opposite side?
2
Clear Waterproof Material in the Dark Ages
54
The Emperor's New Palace
1
what I need to make mirage to constantly occur in sand desert?
7
How could the sword be a viable weapon against modern technology, with the advantage of science-based superpowers?
4
Optimal shape for manipulation via telekinetic light