Help on designing a castle to defend a large wall

I am writing a novel and I am working on the design of a castle that is defending a long wall at the border of a land to prevent invaders. I am currently trying to think of the design of the castle, because it is essentially part of the wall, to help defend it. I can't decide on a good design for it. I considered a concentric style castle, but then I realised that if they retreated to the inner wards, it would just leave the invaders free to enter the lands and ignore the inner wards. Does anyone have any good ideas?

There are some real-world solutions for this: 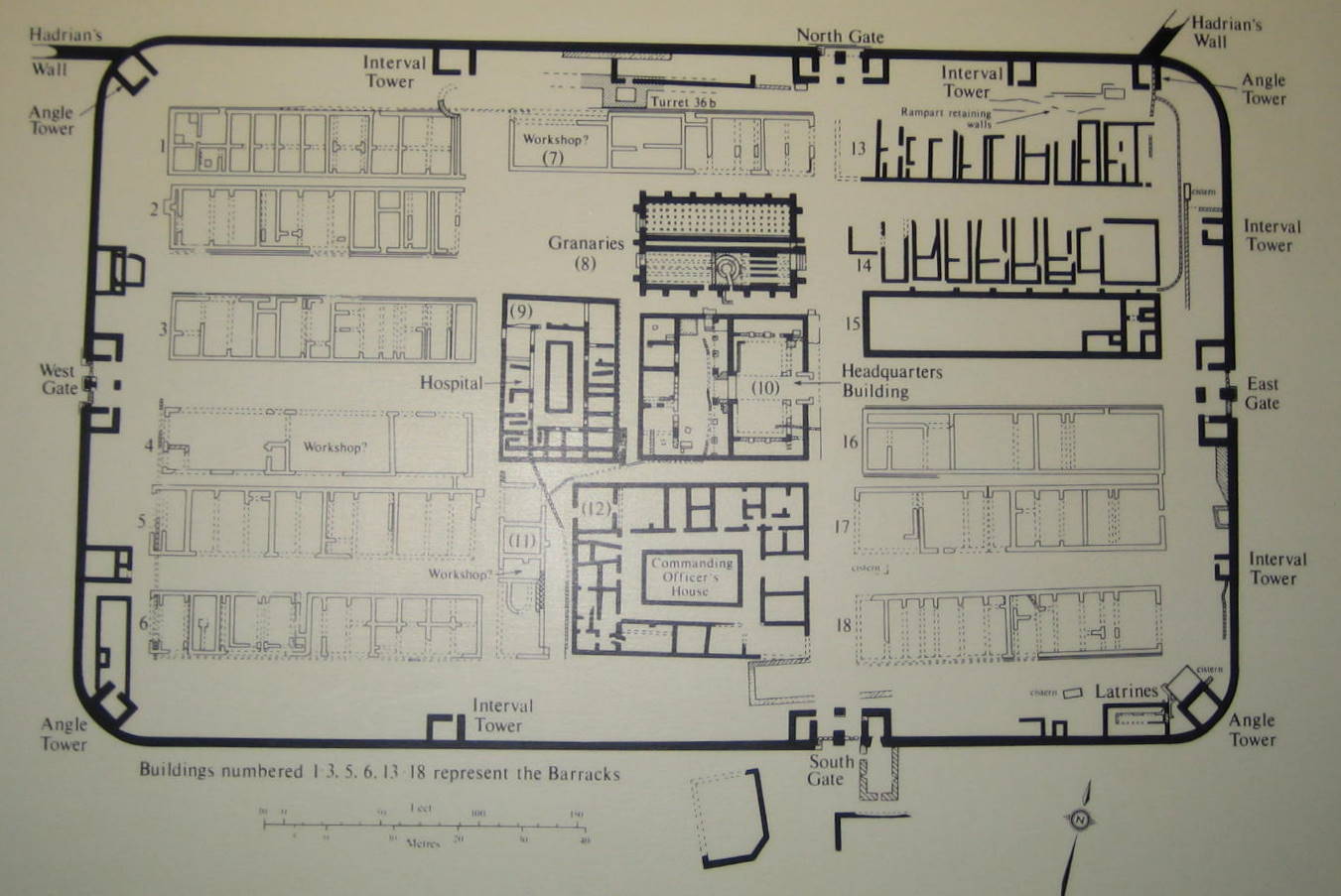 Perhaps the most important thing about really long walls is that they are a gamble to buy time and restrict enemy movement. The wall prevents enemies from freely moving in and out of lands, and prevents large forces from simply marching through an area. The extra time it takes for large forces to go through the wall is spent by the defenders amassing enough troops to stop the invasion. This castle along the wall could simply be a place for this response force to live, like the housesteads on Hadrian's Wall.

Real-world examples have already be shown by previous answers, then here are a few thoughts :

There should be several small castles along the wall, more than a big one somewhere, in order to protect a long wall. Now let's take only one of them.

Its efficiency does not only depends from how your castle is build, but where it is build.

I assume that when the enemy reaches your land, he wants to pass you wall and go behind. Thus, there is no interest in attacking or destroying your castle if it can be avoided. Find were your enemy would try to invade your land if there were no wall at all : probably a large plain or valley, where an army can pass easily.

Put your castle(s) where it annoys the travelers most

On the top of the hills, filled with archers. That place where the river is less deep. Right above this narrow passage.

Previous fortifications could force your enemy to go on a certain way. If there is not only one way, you can make one of them seems easier.

Keep in mind that if the enemy army can both push your own army deep behind the walls on your castle and still attack the wall outside, where they are tighter, they might be too numerous to be stopped (for your circular walls idea).

You can not hide your castle behind the wall if your goal is to protect the wall. You said your castle was part of the wall, but it doesn't have to be entirely behind. The more forward it is, the more outside land its arrows can reach.

If you make concentric walls, a part of the wall can only protect itself and not the other. You could try something like a star (where each branch can cover the others) inspired by fort Vauban : It doesn't have to be triangular, you could have several walls like a comb, with archers on the top. If there are several small branches, if the enemy destroys or take one of them you still have the others. With concentric walls, once they are in, you have to go back.

Think about machicolation, especially if you manage to put your castle on the heights.

One thing you might need to clarify, which will greatly affect the kind of fortification you will need, is this:

What level of weaponry are you looking at giving the attackers and defenders? An army using spears and stones will need a different defensive structure to an army equipped with artillery, snipers, tunnelers, air support, nukes.

Unless your wall extends completely from one end of your country to the other (and even then you've still got problems) it can simply be bypassed by going around the sides, as the Germans did in WW2 with the Maginot Line. The Great Wall of China didn't stop the Mongol invasion, nor did the Atlantic Wall stop the allies from getting into France in WW2. Admittedly the Atlantic Wall wasn't actually a wall, but a series of complementary fortified positions.

The main thing you'd be looking for would be converging fields of fire along the walls, possibly from buildings projecting from the walls themselves, such as caponiers like this one.

By having a castle disconnected from the wall, you're making it much more difficult the reinforce, resupply or evacuate the occupiers of the castle. Having it connected to the defensive wall by tunnels, walkways etc. gets around that.

Any defensive line can be breached at its weakest point (or any point) if you apply enough force to it.

Walls and fortresses are costly to build and maintain, require high manpower to protect and cannot be repositioned.

But you really need to define the level of weaponry technology in use.

The issues of walls has been addressed very well by the other answers, so I will look at the castle itself.

The main reason to have a large castle is both as a fortification and also as a base. Sitting behind the walls and waiting for the enemy is a passive defense, perhaps appropriate if the enemy outnumber you by a considerable margin, or you are blocking the only approach route (i.e. you are at the head of the only pass or valley leading into your kingdom). If you are more inclined for an active defense, then a large castle provides quarters for cavalry to go out and scout, and men to sally forth to engage the enemy.

In your construct, I am imagining a large wall backed by small garrisons, with the large castle farther in the rear, blocking the main access route to the kingdom (perhaps there are other, smaller castles blocking secondary routes. The garrison of the castle rotates with the smaller fortress garrisons, but the main purpose is to send out a force to relieve sections of the wall when it is under attack, or to counterattack forces which have crossed the wall, and potentially sent punitive expeditions across the wall in the other direction.

If you were designing. Castle to protect a wall. From the castle every Area of the wall would need to be visible and then watched at all times that way any threat would be seen Second, a form of Quick and preferably discrete communication that would rally your troops or army to defend the oncoming threat would be vital. Perhaps the idea is the castle is a decoy where as the wall houses your defenders always prepared

Medieval castles are basically a wall connecting round (less commonly quadrangular) towers (triangular bastions appear with cannons). In the Iberian peninsula it was common for castle walls to be protected by a second, small outer wall, a barbican. The space between the barbican and the castle wall should be clean of hiding places so that, if the invaders broke through the barbican the defenders on the walls and towers could easily target them.

For your particular case, I'd suggest the main wall to consist of short panes between towers. The barbican would be placed in front of it because it will sustain the brunt of the attacks, thus shielding the main wall. There should be forts (which may look like a traditional castle) at regular intervals (within sight of eachother, so that signals with fire and flags can quickly pass messages around) and preferably on high ground.

Design the castle in accordance with the direction the threat is coming from, and the terrain. Put your barracks and armories closer to where the enemy is coming from, so when you're attacked, you can get to the defenses more quickly. Make sure that your lines of communication and movement are as short as possible, and that you can see everything. Remember, the shortest distance between two points is a straight line. You should level all of the terrain in front of the castle, cutting down every tree and bush, and set fire to any vegetation so that not only does the enemy have no cover, but they also don't have basic survival materials for a siege, or wood to make siege towers and battering rams.

Pick a spot, ideally, where the terrain in front is flat, and the terrain behind is mountainous or hilly. Maybe you use a river to defend in the front, or have marshes guard your flanks. You want your forward walls to be rounded, to deflect projectiles, and to make the enemy's attacks be like waves hitting a rock. You also want the castle to be part of the wall, as this will protect you from being outflanked and keep your supply lines open. Remember, a garrison force for the smaller castles along the wall needs only be 1/10 the size of the force attacking it. 1 man can defeat 10, 10 men can defeat 100, and 100 can defeat 1,000, especially if they are defending fortifications.

Just remember the principles of geometry, economy of force, and defensive construction, and you'll be fine.

Not the answer you're looking for? Browse other questions tagged medieval architecture military-defense .

5
Should castle walls be circular or square?
16
Castle surrounded by lava
3
What challenges might a microscopic architect have to overcome when designing an entirely walled city
2
Could This Sort of Castle Defense Work?
2
How to prevent allies from acting in an organized manner?
8
How effective is a defensive wall without a wall walk?
6
How Many Soldiers are Needed to Patrol/Defend a Medieval Wall?
49
Help! Mage stuck inside a wall!
4
In a 12-Pointed Star Wall, Which Shape Would the Inner Wall Be for Maximum Defense?
2
How does one defend a military depot against Nazi-ish Sasquatch-vampires in a continent-sized post-apocalyptic wasteland?