What would the weather be like in an asteroid habitat?

The idea of hollowing out asteroids, spinning them on their longest axis, and filling them with air, water, and soil is common in science fiction (Rendezvous with Rama, or 2312 for good examples). Completely enclosed, the asteroid is an entirely self-sufficient microcosm. It should look something like this: 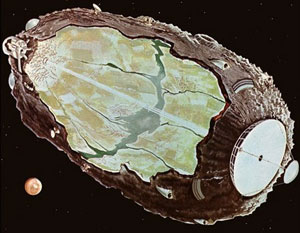 I’m curious as to what the weather would be like in these terrariums. There are many factors that make the atmosphere in such an enclosed habitat interesting, but two that I would like to focus on to make this question tractable follow.

First, since gravity is being created through centrifugal force it varies a great deal from the inner edge of the asteroid (1G) to the center (0G). This means that there would be a strong Coriolis effect. What effects would this have? Would any clouds constantly be moving in the direction opposite the rotation to an observer on the inner surface? The variable gravity also means atmospheric pressure would be variable from the axis of rotation outward. Assuming the asteroid was filled to a pressure of 1 atmosphere at the surface, how would one compute the pressure at the center, and what effect would the variable pressure have on weather?

Second, the total atmospheric volume is small (at least compared to the earth). What does this mean for the weather? Are weather patterns likely to be less random and more periodic since there are no external influences?

For the purposes of the question the asteroid is spun such that the inner edge is at 1G. As for the dimensions of the asteroid, length and radius, I’ll leave that up to the reader. I would actually be very interested to know what effect changing the dimensions would have on the weather. Light is provided by a big light bulb that moves back and forth along a guideline through the center of the asteroid creating a 24 hour day/night cycle. At "dawn" it turns on at one pole, then moves across the asteroid to the other pole and dims at dusk until it reaches the brightness of a full moon. It then traverses back to the starting pole and starts again. The light is bright enough to mimic full day on earth and emits in the same electromagnetic spectrum. Excess heat is removed from the system by radiators at the poles which maintain the average temperature of the interior at a comfortable 22 degrees C. There is also an active water cycle with lakes and rivers being supplied by precipitation.

Here on Earth, the majority of weather-related events happen in a layer of the atmosphere known as the troposphere. It lies from Earth's surface to approximately $20 \text { km}$ - at its highest. Asteroids can range in size from a few meters to $1,000 \text{ km}$, so it's quite likely that we could find one that would be a suitable size for this. I'll pick one about $500 \text { km}$ across - Wikipedia, by the way, claims that only 3 this size likely exist in the asteroid belt.

So, let's say that the asteroid hasn't quite been rounded by its own gravity. It's about $375 \text { km}$ long on two sides and $500 \text { km}$ long on the other - sort of like an ellipse. This means that, assuming a very slight thickness, it has an effective atmosphere $170 \text { km}$ high at its highest. At this height above Earth, we're well above the atmosphere, because we've passed the Karman line. But we'll pretend there's an atmosphere everywhere inside the asteroid, because any gas has a tendency to spread out.

So, there would be a decent troposphere. This means that there could be weather. Here we have a problem, though. Clouds are composed of water droplets, which only get that high in the first place through the water cycle. But the liquid water on Earth's surface only evaporates because of solar radiation - which there is none of here. But perhaps - and this is a pretty big perhaps - the colonists have erected large structures inside the asteroid, and installed a giant artificial heat source to keep the water cycle going. Problem solved.

Rain would also be interesting. I suppose it could fall towards the center of mass, but the local ground would also have a huge influence. For low-altitude clouds, I would imagine it would still fall to the ground. In fact, I'm guessing that the only place it would possibly not fall to the ground would be in the very center of mass - where there is an extremely unstable equilibrium. Eventually, rain will fall.

Let's see. What else? Lightning would still be a possibility, and it could be over very short distances, so watch out! Large storm systems might or might not form - it depends on whether or not the artificial gravity is capable of keeping a lot of liquid water on the surface. Moisture helps storms, so, most of the time, they will go where there's water. Hurricanes, cyclones, and other large-scale weather disasters could be possible, but I'm not sure how likely they would be.

Are weather patterns likely to be less random and more periodic since there are no external influences?

I would think so! The clouds can really only go in circles. And because the artificial heat source could be controlled (yes?), perhaps the colonists could manipulate it to move the clouds in a certain direction. They could - to a certain extent - control the weather! Perhaps other apparatuses high in the "sky" could also exert influences to control the weather and keep it regular. Machines could seed clouds or release or capture moisture. I would think, though, that even without this, the weather would be regular. Either it would be stagnant - not a good thing - or it would travel in loops, depending on which way the wind (artificial?) was blowing.

I'm not sure this entirely answers your question, but hopefully it's a start.

Realistically you can't have a really large rotating cylinder of air. The problem is not the Coriolis force but the air speed difference between the surface (considerable) and the center (zero.) That is going to cause an awful lot of turbulence. If your habitat is big enough you're going to have to do something to prevent that--say, barriers at various altitudes. They wouldn't need to be anything major.

Is having one huge hole dozens of kilometers high and long a hard requirement?

Simpler solution would be to have tunnels and possibly halls few dozens of meters high. You can easily manage air, light and humidity by existing technologies. And in the center near the axis you can build manufacturing which can benefit from zero gravity.

Such structure would be also stronger and more resilient to say being hit by space debris.

Not the answer you're looking for? Browse other questions tagged science-based physics space weather space-constructs .

15
Prevailing winds on a rotating space habitat
19
How big must a building/spaceship be to create an indoor weather system?

6
How would Weather and Regional climate work on a Flat world?
3
What would weather be like if the entire water on the surface of Earth freezes?
6
Could an earthquake alter weather over the long term, and therefore climate?
7
A self-eclipsing orbital ring
4
How would a 384 hour day/night cycle on a desert planet affect the weather?
9
Vertical cyclones in a rotating space habitat
2
What's the climate consequences of a planet with these characteristics?
12
Hurricane-force winds or gentle breezes in an O'Neill Cylinder?
4
What would the atmosphere of the Archaean Earth look like? (Before massive oxygenation)
3
What would weather be like in an O'Neill Cylinder with windows?