Temperatures on a planet with long days

I have a planet with a stellar flux of 1.118, an albedo between Earth's and Mars's, an atmosphere composition of 18% oxygen, 13% argon and 69% nitrogen with a sea-land pressure of 0.87 atmospheres and the land covered by water is 13%.The axial tilt and the eccentricity are neglible. If it's useful, this is the map:

What would the maximum and the minimum temperatures be if a day last 30 days? What could be the difference between midday and midnight? And how would temperatures change across latitude and places?

Thank you for your answers

I am not a climate scientist, nor a exogeologist, nor even an astronomer, and the climate is one of the most complex phenomena we've ever studied. Not only that, climates are chaotic systems, often with multiple attractors, so even with pretty good starting assumptions everything I say could be orders of magnitude wrong (even if I was a professional). For example, the Earth has another possible climate attractor besides the one we're in now in which the entire planet becomes covered in ice, raising its albedo in a self-perpetuating cycle.

Nonetheless, I'll take a stab at an answer.

Obviously the biggest change is the month-long day. This is going to result in very dramatic temperature swings between day and night. Night is easier to guess at: we'd probably see temperatures get down to about as low as we see on Mars, which is roughly -70 C. The atmosphere doesn't actually retain heat terribly well; on Earth, our oceans act as massive heat sinks that absorb heat during the day and release it at night, smoothing out temperature variations. Without those oceans, temperature swings would be much more dramatic, and since there's such a long time between night and day the night side is going to end up losing a lot of heat. The areas near the oceans may be somewhat spared, but it's unlikely that they'll be a lot of help unless they're quite deep. If they're too shallow, they'll freeze completely at night. You should avoid that unless you want your planet to be lifeless.

Upper temperature... I don't know. Probably very hot, but if you want to keep your oceans you should assume less than 100 C sustained temperatures. You're going to get a lot of evaporation from small oceans like those if the temperature is more than boiling for a month. If nothing else, this would contribute to heavy rainfall in other areas of the planet as hot, wet air is carried away by the wind to condense and fall in colder areas. So for the sake of stable oceans, let's just say about 90 C during the height of the "day." You may also want mountains around the oceans, to help pen in moisture from the oceans so you can maintain the rest of your planet as deserty as it looks.

These temperature swings will happen very quickly in areas away from the oceans. Check out this plot: 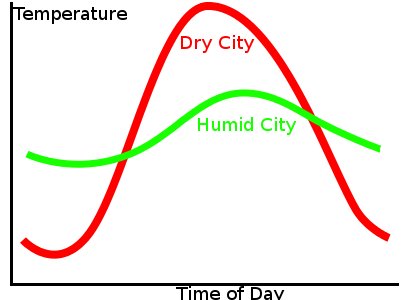 There are some side effects to this all, too. Near the oceans, where the air is humid, at night we can expect it to snow fairly predictably as the moisture in the air condenses out and freezes. When day comes, it will melt similarly predictably. The massive temperature differential will also mean that there will be very strong winds on the planet almost constantly, and they'll always be warmer than where you are.

This is by no means a full answer, and having very slow days like this is going to have a huge impact on everything about your planet. Think about how these dramatic temperature swings might influence native life on your world (extreme Earth environments might give inspiration), how they'd affect human colonies, etc. There's a lot of interesting potential to be mined here.

Not the answer you're looking for? Browse other questions tagged science-based planets weather temperature .

6
Temperature on a 14-days day planet
9
Temperatures in an eccentric orbit?
10
How would this tidally locked planet be affected by its moon and would the moon have a deaccelerated orbit?
6
Can a planet have warm or temperate climates within its polar regions?
6
Would a denser atmosphere hold in more moisture even if the temperature was exactly that of Earth's surface temperature? (Atmospheric Density)
2
At what altitudes would clouds form to produce rain on this world and with what general severity?
5
How does axial tilt affect atmospheric pressure and wind?
5
How to Determine Planetary Extremes of Temperature from Average Global Temperature?