Could edible fish live in a large water tank used as a radiation shield on a spacecraft?

As a source of food, would it be possible to have fish and/or plants living inside a water tank situated between the fusion or fission power plant and the crew quarters of a ship?

The ship in question is a mining barge operating in the asteroid belt, although the idea may be transferrable to interstellar craft as well.

The water supply would also be used to provide fuel for thrusters and engines, as well as for drinking water (using reverse osmosis and mixed-bed filters to purify it). Additionally, the refining process would use large amounts of water.

The water supply would be replenished from asteroids.

Would a lining or special construction material be required to assist in radiation shielding? Ideally something available in the asteroid belt, or refinable in space.

The timeframe is within the next two centuries or so.

I'm looking at a crew size of around 20-30. A semi-automated mining and refinery vessel. No main engines, designed to be moved to new locations by the eccentric orbit of the asteroid currently being mined, and by tugs. So mass and inertia would be an issue, hence looking at a multi-use shield.

Personal note: I worked 1000km into the desert at a nickel and cobalt mine and refinery. About the only things we had to bring in from outside were natural gas and sulphur. Everything else, we provided "in-house", including water.

The water came from underground bores, very high in calcium and other trace elements. It was stored in dams, which had fish, weeds, small crustaceans like lobsters, dead birds and lizards, frogs, you name it. We had our own water treatment plant. "Raw" or untreated water could be used for many of the refinery processes without any problem.

After reverse osmosis, we had potable water for drinking, and safety showers. It was extremely low in impurities, much lower than city water.

After mixed bed filtering (using cat ion/an ion filtering), we had demineralised water. Fewer impurities than bottled distilled water from the supermarket, and useful for running through equipment that might otherwise have been affected by impurities (boilers and steam turbines for example).

Another note: I was at Chernobyl a few years ago, well after the reactor explosion. From my limited understanding, the greatest threat came from actual particles of dirt or sand that could stick to your clothes or be ingested with food or from smoking cigarettes/touching your mouth.

There were many places even within the reactor building itself where people continue to work right now. Other areas were strictly off limits for the next 2,000 years.

Moss, for example was a big no-no. It seemed to absorb radiation. Cats, dogs and other feral animals were not to be touched at all, as they were high enough up the food chain to be affected by eating smaller animals, as well as rolling around in radioactive dirt.

Something like 2,500 people still work at Chernobyl, and only wear protective suits in the bad areas (relying on dosimeter badges on their clothes, and testing themselves when they return to their offices).

Yes, but why would you?

The water in question is being used to absorb ionising radiation, so the fish will also get a fairly high dose if they live near the outer wall. This is fine if you split the tank, perhaps having the outer half as a filtration system (for reasons I'm about to dive into), but could lead to a high rate of piscine mortality or genetic degradation in the fish stocks.

The main issue here is that fish poop. Your nice, clean water source for fuel, coolant, drinking, everything is now contaminated with the various and sundry byproducts of fish. You'll already have had to filter, clean and chemically balance the water once before feeding it into your tanks (heavy metals, wrong acidity, all sorts of things can kill fish), and then you'll have to do the same again in order to turn the water back into something useful. Not only that but you'll have to keep the water oxygenated!

Another problem is that filtration systems generally don't like organic material. If you've ever owned a fish tank you'll know that eventually the only thing you can do with the filter pads is throw them away: things start growing, leading to decreased performance and all manner of difficulties. This is a serious problem on a spaceship.

Next up you have the issue of feeding the fish. Whatever they eat, you'll have had to have grown it. Why not just eat whatever you're feeding the fish? It's simpler, far more energy efficient and avoids the whole 'poop in my nuclear reactor' scenario.

so, to sum up: If you're going to have fish living in your shielding water, don't try to use the water for everything else. Four separate smaller tanks are easier to deal with than one huge one, as you don't have to do everything in each tank. 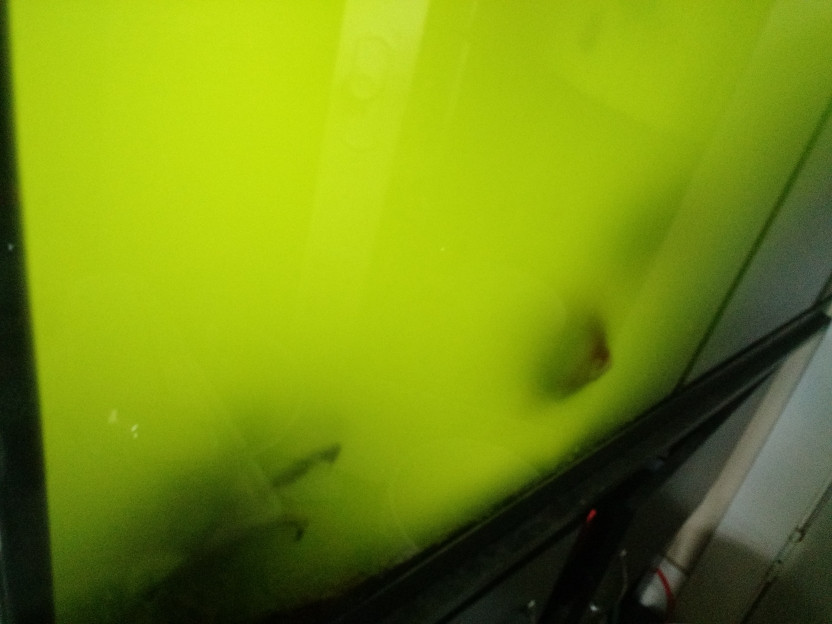 This is my 60 gallon fishtank. It's got plants, fish, and microflora that make it so I don't need a filter of any kind. Totally sustainable. Add another layer of water between it and the hull, and you'd have effective shielding and a regular supply of oxygen and edible food. The filter on this tank hasn't been changed in two years. (I'm a lazy butt, but a scientifically minded one, so I tried to make it into a balanced ecosystem.)

The microflora absorb a lot of the sunlight, as you can see you can't see that far through. Water filters sunlight much faster than atmosphere, a meter barrier would be way more than enough.

So far, the best radiation shields we have known are lead walls. The thicker, the better. If I were on the ship, I would want really thick (1-2 meter) lead walls between the engine room and the aquariums.The feasibility of fish being kept as edibles depends on the size of the aquarium (and the size of fish too, obviously).

Considering that your spaceship has a crew size of 150, and you can support of a population of 2000 fish which mature in 6 months, it could be a potentially viable food source for the crew. However if the crew was larger, or the fish were too less, they could only be used as a delicacy at times, but not an everyday food item on the table.

Not the answer you're looking for? Browse other questions tagged science-fiction hard-science spaceships generation-ships radiation .

25
Are there any benefits to a large body of water in a space habitat?

1
Post apocalyptic science based story
12
Could humans survive on an alien generation ship?
3
Heat regulation in an asteroid base powered by a small nuclear reactor
9
What does the physiology and biochemistry of a vacuum adapted post-human look like? Part 3: Metabolism
32
Keeping a retro style to sci-fi spaceships?
0
Are Orbital Rings feasible to construct in another star system?
19
Would it be possible to hide a spaceship for 30 000 years in a cave on Earth?
3
Absorbing Radiation
6
Using coilguns or VASIMR as thrusters in a game