Saving the most lives without butterfly effects

I have a time machine and I want to do good with it. I want to save lives.

But I'm worried any change that I could make could have larger and larger ripple effects that change history drastically causing even worse atrocities.

This hasn't been done before now so it is unknown if a change that effects my past or my ancestors could erase me or my chance to use this marvellous machine. I need to limit the large scale global ripples or the butterfly effect of my trip.

My ancestors have lived in an isolated part of the world for the last 100 years but I dare not go back farther than 100 years, for fear of messing with my own past.

I could try to stop terrible wars or kill powerful terrible men but then I know nothing about how the wars and people that come after them will change. I also bear the risk that one of those I save will be a great genius or leader and change history but there is no way around that so I have to accept it.

I can send myself back in a one way trip to any place on the surface of the earth in the last 100 years with up to 200 lbs of equipment available in the world today.

Where and when should I go what should I do, to save the most lives without sending large changes rippling through world history?

Where and when should I go what should I do, to save the most lives without sending large changes rippling through world history?

You should go behind your time machine, and pull the power plug out of the wall.

Predicting the effects of causality with time travel is a wicked problem, or a problem with "incomplete, contradictory, and changing requirements that are often difficult to recognize."

But why does that mean you shouldn't go back in time? After all, there's a chance you might save some lives!

Let's look at the two extremes:

How many lives could you save? According to the World Health Organization, here are the leading causes of death, worldwide: 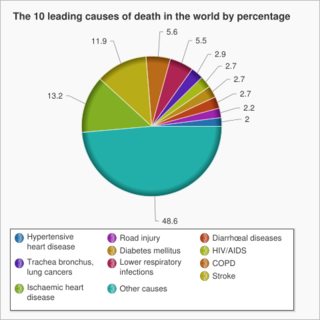 An estimated 56 million people died worldwide in 2012, most of them by natural causes (e.g., diseases are natural causes. Bullets are not.).

So assuming you do not have a cure for old age or heart disease in your kit yet, let's very optimistically say, maximum, you could have saved ~24 million people in 2015. I have no idea how you'd do that, but there it is.

Now, the population of the world has increased dramatically in the past 100 years, from about 1.5 billion to 7.3 billion. I'll assume the death count scales with population (a bit dubious, but more in-depth analysis would be prohibitively difficult). That means you could save about 1/300 of the population, maximum.

Your best bet might be to bring a printed record of every accident, murder, terrorist attack (with documentation on the attackers), etc. So, best case, assuming everyone listens, and doesn't cause other accidents in the process of avoiding the original ones, you could save 1/300 of the population of every year.

The Cold War was a very precarious time in world history. There were some well-known close calls, and possibly more that have yet to be declassified and published. However, if your far-reaching life-saving efforts were to cause any "ripples" that affected any of these events (or instigated others), and the US and Soviets unleashed their arsenals, the explosions, fallout, and potential nuclear winter could end life as we know it.

Sure, there might be a few survivors (hopefully your "isolated" kinsfolk have a good fallout shelter and plenty of supplies), but it's an unfortunately plausible worst case.

As mentioned, causality is extremely hard to predict.

To quote a strangely apt observation from WOPR (WarGames) on the Cold War, which seems to apply to this question: "a strange game. The only winning move is not to play."

In other words, I don't know, but I hope this answer helps to put some bounds on the possibilities.

If all you are concerned about is changes in the present, you can avoid butterfly effects by not going back very far. 1-2 days tops.

You see on the news terrorists blew up a plane last night, so you go back to yesterday morning and take recorded footage of the news reports to the FBI.

When they finally let you talk to someone and they don't believe you, make them a deal that when it happens they'll give you evidence to give past him.

Wait the day for the event to either happen or be stopped, make contact, then take what he gives you to past him.

Repeat this 1 day loop until the terrorists are foiled and arrested before hurting people.

Wait till the next disaster and take it to your contact, which will be easier this time since you already earned his trust.

edit:
You'll probably only be able to save a few people at a time, and it's mostly letting the authorities do the work, but that's ok, since people's lives will be saved.

How to turn it into a dystopia story:
So our hero has been going back to stop major incidents for a while, and the law enforcement community is looking really good, having foiled several major attacks around the globe.
The hero's contact calls him up one day, says "hey, you've helped us out a lot with stopping these major events, but you could do more, if you want. Last week across the country there were 200 murders, 57 rapes, and a bunch of other crimes we didn't do anything about. How'd you like to save those people too? I'll just give you a flash drive, you go back a week, deliver it, and we'll put you up in a nice hotel with room service."
Sounds really good, huh?
Now we have pre-crime, along with a host of other ways that the system could be abused.

I think you could only save a maximum of one or two people.

Saving large numbers of people would increase the potential for changing the world too much. Changing the course of the Titanic for example would put roughly an extra 1500 people into the timestream to cause chaos.

On the negative front there wouldn't be any need to track icebergs and more shipping could have been affected. Especially given the international rules around lifeboats following that disaster.

Not the answer you're looking for? Browse other questions tagged alternate-history time-travel or ask your own question.

8
Why would Government want to fund time travel program to witness shameful history in the making?
26
Temporal Ethics for bidirectional time-travel with branching time-lines
33
Can time travel make us rich through trading, and is this a problem?
4
How can the more lucky friend of John Doe past-proof his travel to Versailles?
21
How could an inter-temporal banking system work?
17
Benefits of time-traveling back to the late Cretaceous period? Economic/financial, resource extraction etc
11
Terra Australis: How can I minimize the effects of its existence on the climate in the rest of the world?