Polar Solar: A world on its side

I am working on a world and I have run into a minor roadblock. The world is altered such that one of its polar regions is constantly facing the sun and the other is always facing away. I figure that the world would have an axial tilt of somewhere around fifteen to twenty degrees. Now here is where things get odd. I would like the constantly sunlit lands to be heavy jungle, and not the desert I am fairly certain is most likely. How would I go about getting that result with the world as described? Is it even possible? Do I need to resort to magic or some other hand-waving to make it work?

Make the sunward side not a pole.

You can't have a planet rotating on an axis that always points at the star, there isn't anything in orbital mechanics to allow that. However, there isn't really a difference between having the planet simply be tidally locked and the impossible situation you've asked about. The primary difference is that a person standing on the surface won't see the sun circle the sky. In either case there is no day/night cycle, the sunward side is always lit and warm and the anti-sunward side is always cold and dark (unless you've got a moon to light it up).

The average temperature can be selected by correctly choosing the distance from the star. The climate for the sunward side can be jungle if geography and atmospheric conditions are correct. It's an entirely plausible premise.

A tidally locked planet also does not need to lack seasons. It can still have the precession that causes seasons on Earth, that is, the planet could present librations relative to its star. For instance, our moon is tidally locked to Earth, but presents librations (the slight rocking see in the animation below, but without the day/night cycle). This might give your planet a seasonal light/dark cycle, but you can play with that parameter as you like.

The planet Uranus in our own Solar System has the rotational axis pointed more or less at the Sun, which provides decades of light at the pole, followed by decades of darkness as the planet orbits the Sun. 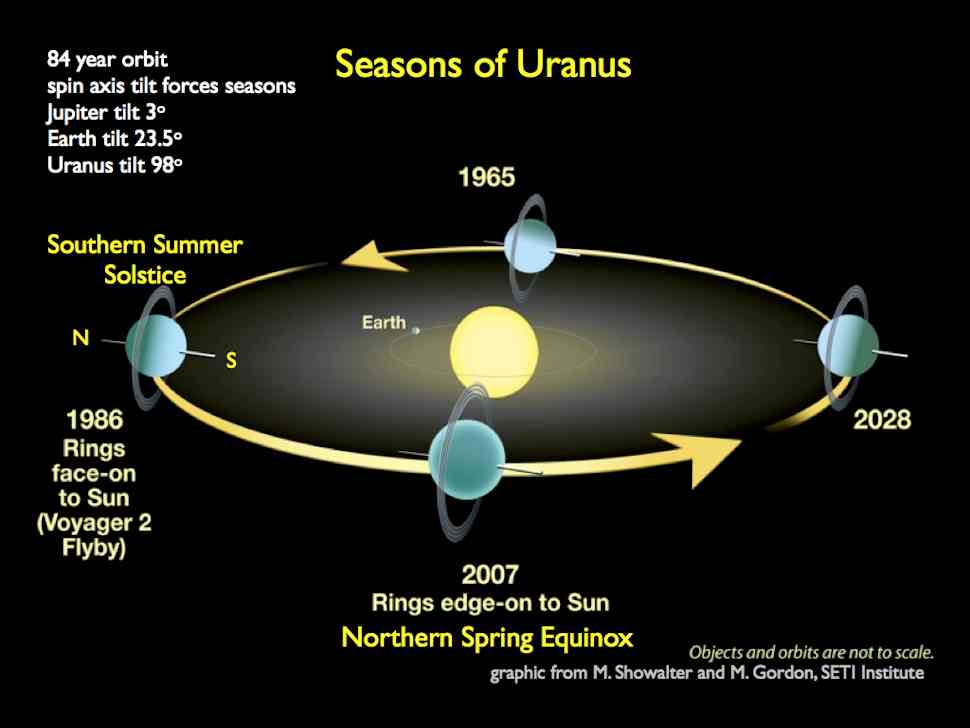 While a planet the distance of Uranus isn't likely to have any sort of vegetation, much less a jungle, an Earth like planet in the habitable zone might be able to support jungles. The hydrological cycle will need to be carefully mapped out to ensure that the proper amount of rainfall is available (perhaps each pole has an ocean or sea which is constantly illuminated during the "summer", something like the Arctic Ocean here on Earth), and of course the vegetation and wildlife will either have to hibernate during the winter during the dark period, or evolve to rapidly migrate across the planet as it orbits the Sun.

Since plant life will have to grow and spread with incredible rapidity in order to follow the Sun, you can expect rather unusual conditions in the jungle, including explosive growth of creepers, vines and roots to establish the plant life and take advantage of the changing light conditions, explosive seed pods to "fling" seeds into the zones about to become illuminated and perhaps carnivorous plants that gather nutrients from animal and insect life, since the soils will probably be quickly depleted and lacking a lot of organic matter. Plants will also compete ferociously in order to get as much light as possible, so animal life evolved on this world will probably need to be either very small and fast, or large and armoured. Plants might have some limited sort of intelligence to take advantage of every aspect of the environment as it becomes illuminated, while the herbivores will also be much smarter, since "sneaking up on a plant" will become an actual survival skill. One can only wonder how much smarter the carnivores will be...

Not the answer you're looking for? Browse other questions tagged alternate-worlds weather or ask your own question.

6
Celestial arrangement for the Cube World

2
World destruction - continued existence of separate biomes possible?
2
Flat world with land only between the tropics
2
Flat world and water
2
What would be needed for the entire planet to have a polar climate?
6
Sea of Fire in Polar Regions