How did pirates board a ship before gunpowder?

I want to add pirates in a medieval world where gunpowder doesn't exist. Pirates are traditionally known for canons and firearms, so how can they attack and capture commercial ships with non-gunpowder medieval technology.

Look a few hundred years back. Grapples still worked, though very often you would stop a ship by ramming them, so ramming prows and rowing crews might make sense. Catching up to an enemy would be essential and pirate vessels would likely prize speed over anything else.

Oddly, I think the big difference would be the need to have a team of rowers for maneuverability since you had to close in to fight.

You could replace cannon with say ballista, scorpions or even very large banks of crossbows. Flaming arrows to burn and damage rigging and sails makes sense.

While they take longer to load than longbows, crossbows would be a one for one replacement for muzzleloaders, and would probably serve the same role as personal, ranged weapons.

While its tempting, I'm pretty unsure how a small force of longbowmen would fair on a moving platform with a moving target. Might be worth considering though especially with flaming arrows.

Before the age of the Caravel or Carrack when most ships were one or two decks, ships were often primarily powered by a single sail and a series of slave or volunteer rowers.

The common tactic in piracy was to have a larger ship with more rowers to close the distance with the target ship. Upon closer contact, skirmishers shooting missiles towards the target would aim to hamper the defenders with javelins and arrows.

Upon closing with the target, the attacking galley would attempt to ram the targets oars as to either force them to withdraw their oars and slow, or for the target's oars to snap under the ram and be disabled.

Then upon disabling oars, the attacking ship would throw across grapples to connect the two ships, then begin the boarding procedure where they would often slaughter the ships marines and take the galley slaves for them selves to replace crew lost in the assault.

The greatest advantage to a pirate ship was speed, first to close the distance between vessels, and second to ram the targets oars to prevent its escape. This last part was the key tactic used in piracy.

Pretty much the same way you see on Black Sails (substituting bows for guns). Shoot arrows to pick people off as you approach, focusing on officers and other key personnel. Steer as close alongside as you can. Throw ropes with grappling hooks to pull the other ship close enough to jump over, or use spiked boards to make paths over which people could charge. Either way, kill any of the crew that fights back with your swords.

Note that pirate ships tended to be over-crewed so as to have more people than the ships they attack. This also means that they didn't necessarily have to keep any of the crew alive. This is less true now, as pirates can use superior weaponry to overcome civilian crews and the ships are more complicated. Experience with the actual machinery is more useful now. Experience transferred better between ships then.

History - especially Romans - could be the perfect inspiration; at their time, there was no gunpowder. 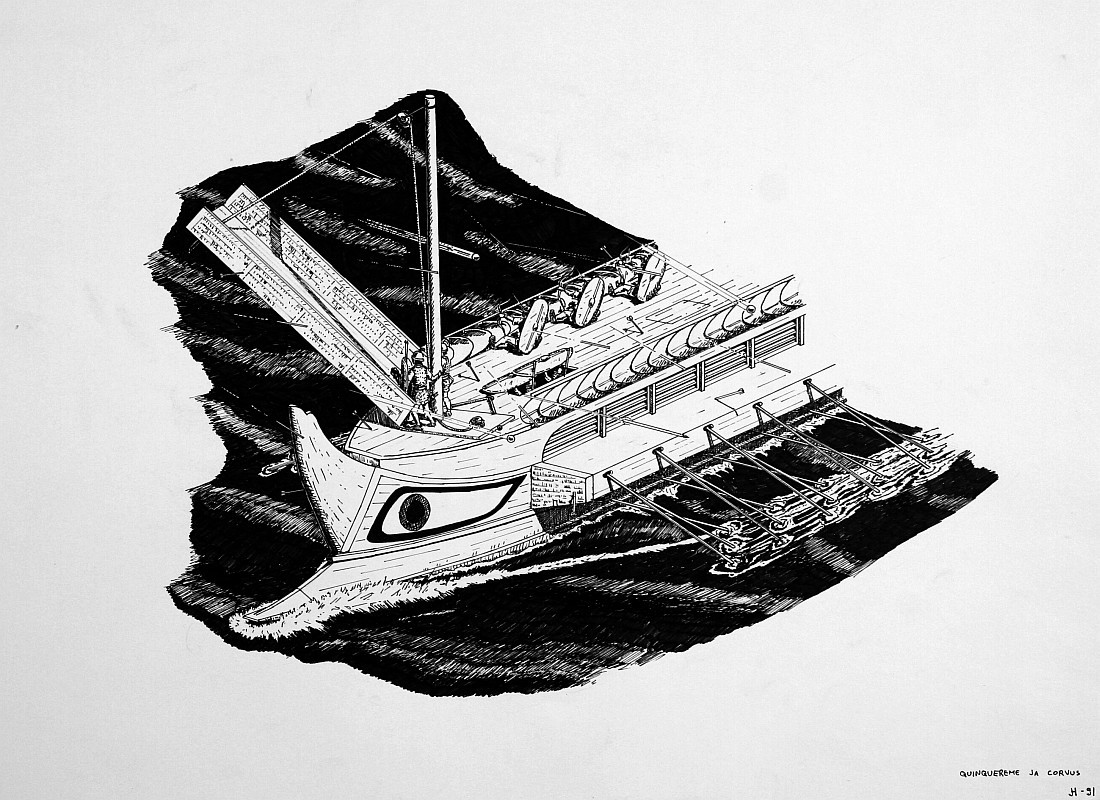 From the image source :

The use of the corvus negated the superior Carthaginian naval expertise, and allowed the Romans to establish their naval superiority in the western Mediterranean.

The corvus is kind of a "boarding bridge", which allowed the Romans to use their experience in on-land warfare. You just need strong, and preferably well armored soldiers. Enemy archers or crossbowmen would stand almost no chance if your ground troops are as disciplined as the Romans.

Also, it's worth noting that they also had a ram and ballistas, proving the proposals made by other users very efficient.

However, there's a difference between pirates and romans : the latter ones are not interested in looting anything; they only care about defeating the enemy fleet.

You, on the other hand, only want to immobilize your enemies, but not to sink them, as in that case, all your loot would be lost. So a ram could be "too" dangerous.

This is actually the main advantage of the corvus.

Read more about the roman navy and their tactics on Wikipedia.

Prior answers seem based in a Mediterranean / Caribbean scenario. Piracy was and is prevalent in Southeast Asia.

Pirate operations vary according to local conditions, the availability of targets, and the competence of the pirates involved. Geography has a large influence on pirate tactics…. See areas dotted with islands rocks and recent form an ideal setting for pirates using the "hit and run" or Asian method because they provide hiding places and narrow sea-lanes slow ships down making them easier targets. Pirates conducting a hit and run attack board a steaming vessel, plunder it, and carry off whatever they have been able to lay their hands on. The geography of Indonesia is particularly propitious for this kind of attack…

Back in the 1600s, attacks like this were made by small fast ships under cover of night, manned by pirates armed with knives.

In the 2000s, attacks like this are made by small fast ships under cover of night, manned by pirates armed with knives.

Mainly amateurs, they put on masks and use their own household machetes (parang) when they strike at night. “Black magic” helps give them confidence. They believe water from sorcerers (dukun) will make their sampans invisible.

The thing about being this kind of pirate is the thing about being a predator. You do not need a lot of tech to match the tech of your opponent. That is warfare - intraspecies competition. If you are a predator, you attack prey that cannot fight back effectively. You take on prey that you can surprise before it fights, or which is unable to fight. Opportunity, timing and speed are what it is all about, now and 1000 years ago and 100,000,000 years ago.

Pirates did their job well before guns. As soon people had ships big enough to sail and move goods, there were pirates who used this said ships to visit unlucky or ambush trade routes.

Lack of guns did not make it harder. What makes pirates a danger to trade ships is weight. As trade ships are loaded and for most part are build for capacity, not speed, pirates had no problem to chase them down( galley, sloop, schooner).

How you board trader? It is something like mobile castle siege. You use your speed and maneuverability advantage to get close. Start to rain arrows on enemy defenders, get ready boarding team. Use hooks and ropes, ladders, boarding ramps and small boats to board and overpower guards.

Ramming is viable, but bad option, as you will damage ships or even sink them. It is more of a war tactic.

Greek fire was an incendiary weapon used by the Eastern Roman (Byzantine) Empire that was first developed c. 672. The Byzantines typically used it in naval battles to great effect, as it could continue burning while floating on water. It provided a technological advantage and was responsible for many key Byzantine military victories, most notably the salvation of Constantinople from two Arab sieges, thus securing the Empire's survival. https://en.wikipedia.org/wiki/Greek_fire 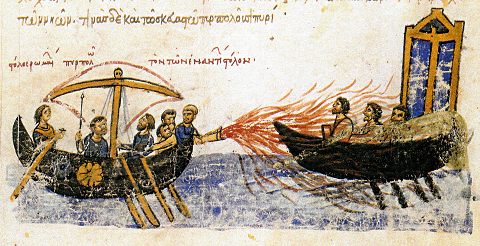 Not the answer you're looking for? Browse other questions tagged medieval ships .

9
How long could an age of medieval tech last?
14
How would I keep a set of Medieval technology?
8
Could a classical era or middle ages civilization advance in shipbuilding and colonize multiple distant continents?
4
How often did trading/traveling ships set sail between port cities in Medieval times?
14
Naval warfare in a Bronze Age setting - few big ships versus many smaller ships
28
How could medieval ships protect themselves from giant mermaids?
8
How would a enormous more-than-city-sized ship fare in a fantasy world?
5
Could medieval people build an airtight spaceship or space ark using their common resources?
21
How hard magic could make bows, swords and other early/mid- medieval weapons relevant alongside fairly advanced gunpowder weapons?
10
Aircraft Carrier or ship with similar functionality for Dragon Riders?