Substances created via quantum-level manipulation possible? How are they distinguishable from “normal” ones?

Lets assume an entity in my fictional environment that is connected to modern day earth in some way. Via this connection materials (like metal) reach the earth, that were engineered to be a certain atom or molecule via quantum-level-manipulation, i.e basically a tool that tells molecules be another substance.

Please note that quantum-level transmogrification is not an area of my expertise, but I assume it is possible with enough knowledge and energy to practically create one substance out of any other. Right?

If this is true, would a modern day lab or jeweler (in case of gold or platinum) be able to see a difference between substances on earth and "artificially constructed" ones?

There is a possibility: the material is too pure. Some materials, like diamond, end up 100% pure due to their molecular structure. While flawed diamond exist (and can have more value than flawless diamonds), flawless diamonds exist in nature. However, trying to sell a flawless diamond the size of a small car is a pretty good pointer that something is wrong. It's possible for a diamond that size to occur in nature, but not very likely.

Similarly, some metals are very difficult to purify; while 99.999% pure gold is available, truly 100% pure gold is almost impossible to achieve. Any reactive element with 100% purity, especially a large amount, should be suspect.

Also, while various materials have a very regimented structure, others are fairly random. Crystals tend towards simple mathematical forms - straight rows, hexagonal shapes, etc. Other materials, especially materials with large molecules like plastics, have an almost random internal structure. Organic or complex materials with simple patterns may be suspect.

Finally, manufacturing atoms may result in some unwanted atoms being formed by accident, or as waste; while finding a small amount of silver in gold bullion can be expected, finding lawrencium would be very out of place. Finding uranium in glass, argon bubbles in ice, or helium in steel would all make very little sense, and could point to the material being manufactured in strange ways.

Look at the isotope ratios.

If you're transmuting matter from one element to another by adding or removing protons, or changing a neutron to a proton or vice-versa, you may well be creating atoms of the new element with a different number of neutrons to the majority of naturally-occurring atoms of that element.

This will affect the density of the transmuted matter in comparison to naturally occurring samples of that matter, and may also make it slightly (more) radioactive, as different isotopes have different half-lives, the less common and less stable isotopes emitting radiation as they decay to other elements.

Yes, it's possible. Stars do it all the time.

You can do it with fusion, a simple thing to understand but quite difficult to actually achieve. To create actual programmable matter is a different story, but there is some rather exciting research on that front. It's also well explored in one of my favorite series of books, The Queendom of Sol by Wil Mccarthy.

Can someone tell the difference?

Here is a representation of an atom of gold : 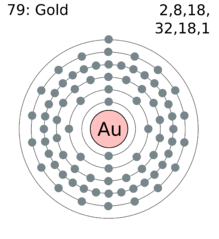 The gold you make at the quantum level will look identical to this. However, when you zoom out, you get this: 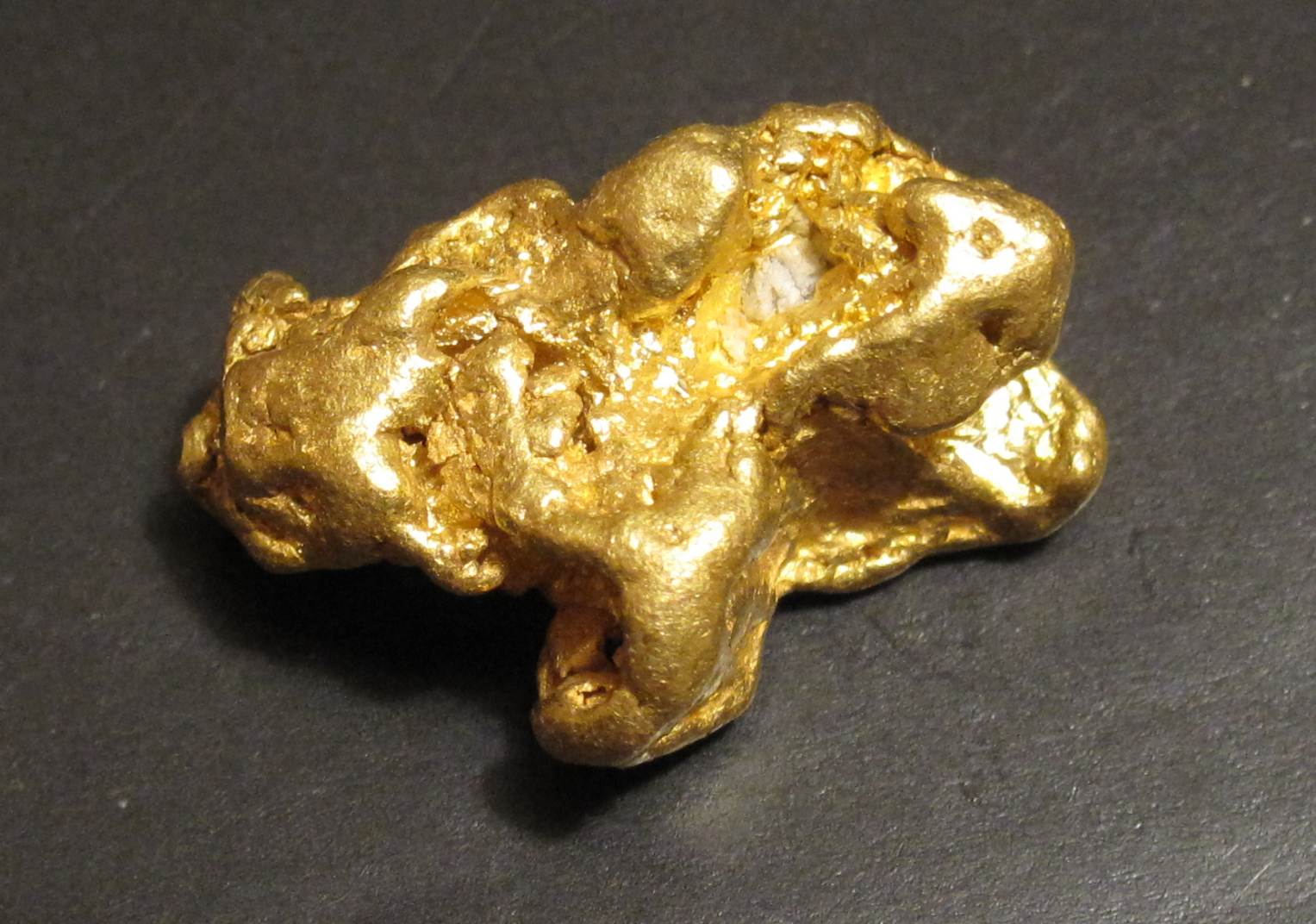 Your gold still looks exactly the same. It not only looks the same, it acts the same: has the same malleability, conductivity, chemical reaction, mass, smell, and value1. Not only that, it's not even fake. It's by all definitions, real gold. The only way to differentiate them would be to put them in jars and label one as "gold I made" and the other as "gold the stars made".

This sort of situation exists with diamonds and synthetic diamonds. There is no difference except one was made in the Earth and the other was made in a lab. Of course, the people who sell diamonds or control the mines certainly want you to think otherwise. Which might happen with your gold, but no one can actually measure any differences.

1: Until you completely flood the market.

As explained by others an atom of an isotope of an element is not really distinguishable from other similar atoms based on whether it was made by a super nova or your lab.

There are some exceptions that might apply that other answers did not mention because you did not actually ask.

First is the purity of the sample. I think one answer already mentioned that 100% pure gold is not really available and if your process could create such it would be an obvious sign of its origin. A more general case is the isotope ratios of the element. The isotope ratios of a sample vary based on its origin and history. Your artificial atoms would be produced by a process different from the usual and have almost no history for isotopes with shorter half-life s to decay. So its isotope ratios would probably be unusual.

But you can spoof this thru simply producing the correct isotope and element ratios. For example your too pure gold becomes more convincing if you mix it with some gold you bough from a shop.

Another possibility is that not everything is produced by natural processes and more things have half-life short enough to become almost non-existent. For example any large sample of element heavier than uranium can be assumed to be produced artificially. Same with many isotopes of lighter elements. They have half-life too short for significant amounts of naturally produced material to still remain.

One possibility is the hypothetical island of stability that might exist for super heavy elements. Such isotopes might be stable enough to be useful, but would be extremely unlikely to be produced in quantity by natural processes. At least not in places we can access. More likely their half-life would still be too short for natural samples to be found. So just like with other transuranics all samples would be artificial.

As @Samuel mentioned, if you're building at the subatomic level, then you can make the artificial substance absolutely identical to the naturally-occurring one. But if you want them to be distinguishable somehow, you could have the artificial one be more pure or perfect than it would be naturally. If your quantum process builds things according to theoretical specifications, then the results will be slightly off from what happens in not-so-perfect nature. For example, say a plant can convert sunlight to plant food at 40% efficiency (that is completely made up). In the real world, this will be a bell curve: most plants will photosynthesize at around that level of efficiency, but you'll have outliers on either end. Identical, mathematically perfect specimens created by your quantum machine will be noticeably different from their natural counterparts, both at a microscopic and macroscopic level.

This could lead to an interesting plot where the "perfect" and artificial materials are somehow pitted against the natural ones. Look at snowflakes and genetic engineering for examples. You could build snowflakes and humans to specifications at a quantum level of detail, but would you really want to?

You could also make it so that your machine can build things atom by atom, but not replicate the chemical processes that give materials some y their physical characteristics. Clay, for example, might be composed of the same compounds before and after being in the furnace, but the heat makes it harder, more brittle, etc. If your quantum machine can't replicate that, that would set its products apart from the ones that are processed the old-fashioned way.

There are several answers depending on how your question is interpreted.

See Hacking Matter by Wil McCarthy, wellstone, and my other answers here where I mention it.

Maybe that's what you mean. A device might seem like it’s made from mundane metals or amazing materials unlike anything we know, but is actually not made from natural atoms, but from wellstone. If sufficiently damaged it can’t operate and exposes itself as normal-matter semiconductors and quantum wells.

If you say it is made of atoms, but are fishy, then I would say “no”. Any exotic atoms or states of atoms are not stable.

Note in the first answer though, a gross test may make it seem to be atoms of some familiar element but it’s not really; the behavior is emulated on a scale larger than single atoms.

A 18th century jeweler might not be able to tell that a substance isn’t a precious gem or metal. But I don’t think it would be confused with another material by an expert. A lay observer might think “shiny grey metal used to make dinnerware, not pewter or bronze but neutral colored” and presume “sterling silver”. An expert will say “the color is off; amazingly non-reactive; melts at wrong temperature…” and will come up with aluminum if it was known to that culture yet.

For gems, earlier cultures might have no way of identifying the composition, and there is enough variation in natural gems that it might be accepted as a rare sample of (something).

Plastic might be more interesting. Wax or shellac or some such, with the details of just how marvelous is is being lost on them.

The Roswell incident may have been poteniated by the bizarre unfamiliar materials involved.

But bring that up to today: a material can be subjected to spectrographic analysis and mass-spectrometry, revealing the exact tally of which atoms are present. Cutting-edge tech like at SLAC can map the exact arrangement of how molecules are put together.

So if materials are truly wondrous, people can discover “ooh, the superconductor is made like this” and read out all the details on an atomic level.

Knowing how it’s made on the atomic level won’t help them in fabricating more of it, though.

What if the material is not a simple substance, but has a huge complexity like living cells? We can grasp the crystalline structure of a mineral, but “leather” is harder to figure out on an atomic scale.

Nanotechnology, if not wellstone, may be more like living material and hard to grasp on a level smaller than single cell units.