Convert radioactivity directly into electricity: Possible or not?

Is it possible to directly convert radioactivity to turn it into electricity?

If yes, then what is the conversion rate?

Strictly speaking "radiation" — i.e. the result of radioactivity — is not just one thing.

There are (most commonly) the following types or radiation that can be the result of radioactivity and that we care about in this context:

A thermoelectric generator would count as direct, as well as any other form of "EM radiation to electricity" tech. Lots of different things are radioactive in different ways. The reason we design fission reactors the way we do is because they are the most efficient way of getting electricity/power from the substances. (e.g. use heat to make steam, use steam for mechanical power, power into electricity.)

"Directly harvesting" the energy of the various forms of nuclear radiation is going to be terribly inefficient, meaning you will need a lot more of it. That means all the stuff you aren't harvesting will kill everything in the general vicinity.

Neutrons are notoriously hard to control, and very dangerous when zipping around at the energies seen in fission reactions. Gammas aren't much fun either.

Possible, yes. Practical, no - unless the definition of direct conversion is expansive.

Given your question, I have to assume that any process that converts heat to electricity with steam turbines does not count. Others have suggested RTG devices are direct. I would not and suspect you would not in that this is simply another form of heat engine.

What are the possible products of radioactive decay. Alpha particles, beta particles, gamma rays, neutrinos, neutrons. Occasionally you can also have spontaneous fission or cluster decay.

Neutrinos are useless because they interact so weakly with other matter.

Gamma are photons, typically on the order of 100 keV, though this varies widely. As photons, they can be converted directly to electricity via the photoelectric effect. However, they are not well suited for standard photoelectric panels. Blue light has an energy of about 3 eV, typically gamma decay is over 1000 times as energetic, at best efficiency would be less than 0.1 percent, more likely less than 0.001 percent when using a standard cell. Given that the photoelectric effective is a matter of knocking electrons loose, there will be no alternative material that result in efficient photo-voltaic cells that operate at low voltage. High voltage photo cells might be possible, but would certainly require a great deal of engineering to become practical and efficient. As the only use for high voltage cells would be for capturing gamma decay, such research will not be useful in general. The thickness of the nuclear material would be a directly negative efficiency effect - as discussed later.

Charged particles have a little better possible outcome. Say you have a source that consistently emits electrons, you could have a copper target collect these particles, thus supplying electric current. Efficiency would still be horrible (much less than 1%) as you don't directly capture the kinetic energy of the beta particle, nor the associated radioactive products, e.g., gamma decay.

There is one additional effect that could be direct. Set up photocells to capture the blue glow associated with Cherenkov radiation. Efficiency is very much less than 1%. Whether this is direct conversion is arguable.

For a large-scale practical energy source, you really need to be based on Th-232, U-235 or U-238 or K-40 as these are the only long-term radioisotopes in abundance on this planet. K-40 is a very poor choice since it not fissile or fertile, beta decay is far less energetic than fission. As a beta emitter, it cannot trigger chain reactions, so the power density is very very poor. U-235 is likewise a poor choice due to it relative lack of abundance, but since it is the only naturally occurring fissile isotope in any abundance, it is quite attractive from that viewpoint. What the attractive isotopes all have in common is that they are fissile or fertile and can thus participate in chain reactions necessary for high power density. The difficulty of direct conversion to electricity explains why every system is based on driving a heat engine. Efficiency is relatively high and the heat engine was already well understood at the beginning of the nuclear age.

Yes, you just need one of these: 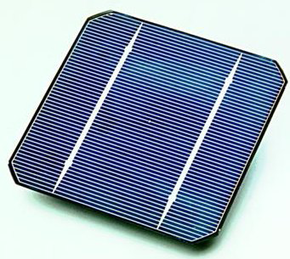 Conversion rate, of course, will depend on the type of radiation you are harvesting. EM radiation matching the optimal frequencies of the photovoltaic array will have conversion rates approaching 50%, while something that gives off a large amount of beta particles will need a different approach altogether.

Use a Fission fragment reactor.

... a fission fragment reactor is a nuclear reactor that generates electricity by decelerating an ion beam of fission byproducts instead of using nuclear reactions to generate heat. By doing so, it bypasses the Carnot cycle and can achieve efficiencies of up to 90% instead of 40-45% attainable by efficient turbine-driven thermal reactors.The fission fragment ion beam would be passed through a magnetohydrodynamic generator to produce electricity.

It can also double as a high ISp rocket, by using the beam itself as the reaction mass.

(Though they're not very efficient yet.)

Accordingly, present conversion efficiency in lab is about 2%, but this paper says numbers as high as 10% are hopefully feasible. In the case of Sr90, this 10% efficiency would work out to roughly 70mW/g of fissile material, making the whole assembly roughly on par with alkaline batteries (double As) in terms of power per weight.

The paper claims that nuclear batteries will last much longer than traditional batteries and wind up saving money because they won't need replacing.

This concept isn't new. An old colleague told me about a project from back in the 60s trying to accomplish the same thing. We're further along now, but not yet by leaps and bounds. Regardless, long-lasting nuclear batteries could make for a great mechanic in a near future story.

Well, beta radiation is electrons blasted away at high energy. That leaves the material with a positive charge, and the electrons might interact with other material in an electric manner.

In fact, that's used by smoke alarms, in some sense.

If "electricity" means using a difference in potential to cause a current to flow through a load, then generating a separation of charges — quite directly — certainly counts.

I think what he's asking is whether or not the increase in entropy when an atom (an atom's nucleus) goes to the ground state can be somehow used to create an electric field — voila, a direct electricity source. In practical terms, it means little to no heat (minus any heat generated by resistance present in conducting materials). If such a thing could be discovered, the end of our energy needs would be near.

This is practical for low current/power inaccessible applications -- think like a CR2032 before we had lithium coin cells, in a place where you can't just up and change the battery. The technique used is betavoltaics, using a beta emitter (such as a tritium capsule or sealed-in potassium-40 layer) impinging upon silicon solar arrays. The voltages and currents involved are rather low (few hundred microwatts to a few milliwatts of power depending on the size), but are predictable over the long term due to the decade+ half-life of tritium, or the far longer half life of say potassium-40.

Yes, but only for some types of radiation and it requires a large device. At least, there is if this idea from the Farnsworth Fusor hobbyists is correct:

If you have a source of high-energy charged particles (for Fusors, the fusion reaction; for you, alpha or beta sources), you can slow them down in an electric field. Tune the electric field to only just stop the charged particles, you can efficiently extract the radiation current at the voltage you needed to halt the radiation (this requires near-constant emission energy, which further limits which sources of radiation you can use).

Given typical radiation energies and the 3MV/m threshold at which air stops being an insulator, there is quite a large minimum size for such a system, regardless of how little power you want.

RTGs (as mentioned by Nicky) can use thermocouples. Radioactive decay generates heat, heat is turned into electrical power. The efficiency is low but the endurance is high.

Possible with currently known processes? No.

Possible at all? Maybe, just depends on there being something we currently don't know about.

Reflect that an astonishing amount of power generation happens through the electromagnetic induction process discovered in 1831. Most of the advances made since have basically been better/different ways of moving a magnet through a coil, or a coil around a magnet.

Yes, but you get a lot of voltage but an extremely tiny current.

This works but making it useful is another matter...

Suggests that, with proper application of key materials, a single particle can trigger the flow of many times more electrons from the substrate. Research will lead to many, great, improvements.

You can easily build such a generator from a material that produces alpha radiation: Alpha radiation means that the material spews out double positive helium ions. These ions have very high kinetic energies, usually in the range of several MeV (Mega-Electron-Volt). And most radiators have a very specific energy at which they radiate. So, all alpha-particles emitted from material A may have an energy of 2.7MeV, while all alpha-particles from material B have a punch of 4MeV.

This is perfect for your generator. Because, if an alpha particle (doubly charged!) leaves an electric conductor at 4MeV traveling towards another conductor with an electrostatic charge of 2MV (Mega-Volts!), it will have lost all its kinetic energy to the electric field.

Thus, all you need to do is: Place a thin sheet of the right radioactive material between two metal plates, evacuate the space in between, and convert down the resulting 2MV electrical power to some usable voltage. The entire assembly will act pretty much like a 2MV battery, which will reduce in voltage a bit as you draw some current from it. The most complex part will be the power converter.

Obviously, the 2MV electric potential puts a lower limit on the size of the entire assembly: If you make it too small, all you get is sparks...

I have some relevant data here but had to back it off because the reaction could have proliferation concerns. But yes it enables miniature cells that can generate near ZPM levels of energy costing in the 1600-4000 ukp to build. Approximately 4.5kW bursts for a car battery sized device but needs water cooling etc and the core can be replaced with care.

Not the answer you're looking for? Browse other questions tagged science-based science-fiction nuclear-power or ask your own question.

5
How might a Kardashev Scale Level II civilization transport energy?
26
Would it be realistic to store energy using gravity by elevating buildings?
2
What would be the positive and negative traits of a total matter to energy conversion drive?
4
How can an optical signal be converted into a mechanical/acoustic signal without using electricity?
4
Could a more convenient form of energy transfer/storage than electricity be possible?
3
How could a creature derive energy from radioactive elements?
1
What would be the best way to power a mecha?
4
If the solar panels on a spaceship were able to convert gamma rays to electricity, how much more power would it produce?