What would make good clothing for an underwater species?

Consider that clothing is often worn for:

and, if possible, should last at least 3 months within sea-water without decomposing.

What kind of clothes would work best for underwater? Or, if you don't think octopus society would use clothing for the above points, what would they do/use instead?

They probably wouldn't wear clothing all the time.

Like Cyrus and some others I suspect that an octopus-like species who are so much more flexible than humans would find clothing restrictive. Humans often find clothing restrictive and we are far less stretchy than octopi. How would you shape a piece of clothing that would go on an octopus? Sleeves would be a lot of work to make for all eight arms and more importantly would obstruct the sucker pads on their tentacles. They use those pads. A garment that covered their head/body ("mantle"?) would obstruct their gills, or if it had a hole for the gills, would scarcely cover enough of their bodies to make a difference in terms of warmth.

Reinforcing the point about flexibility is a related point about buoyancy. The density of octopus bodies is much closer to the density of the medium they live in, water, than the density of human bodies is to the density of the medium we live in, air. That's why the force of gravity appears to be less underwater and why sea creatures can just swim up the side of a cliff where we would have to laboriously and dangerously climb it. The relevance to clothing is that humans spend most of their waking time upright or semi-upright and gravity ensures that their clothing stays put, draping decorously downwards. Octopoids would live in a much more three-dimensional world, swimming up, down and all around. Clothing would float a lot more, tangling up with their tentacles and making locomotion and modesty difficult. It would need tighter fastening than human clothing just to stay on.

But let's say they do wear clothing sometimes. What would it be like?

Nonetheless, I can see that they might wear clothing on occasion, despite its inconveniences, for adornment, status, identification, protection or other reasons. We put up with uncomfortable clothes, why shouldn't they?

Llario's answer has already suggested fish skin as a fabric. This is the best choice: it is available, it is flexible, and it is designed by evolution to last underwater. I do not know whether any sort of processing would be possible or desirable to make it last longer. Presumably you would have to very carefully scrape off all traces of flesh from the skin or run the risk of attracting predators. I can't imagine that tanning is relevant underwater but I'm very ignorant in this area.

Another option is fabric made from fibres, possibly derived from seaweed or other sea plants as also suggested by Llario. Woven fabric is the easiest form to invent. Weaving has a little "give" to it, but not much. It took centuries of development to develop the pattern shapes of a standard human jacket or pair of trousers that allow reasonable movement without using up vast amounts of fabric. These difficulties will be greater for octopoids as I said above. I don't think they'll use woven fabric for practical clothing, but they might enjoy swirling their woven cloaks in the water when making a dramatic entrance to a party. For clothing stretchy enough to allow flexible sleeves for their tentacles and figure-hugging coverings for their mantles into which gill-openings could be made, they need to learn to knit or crochet. They really could wear beanie hats.

If you allow synthetic fabric then latex will be the first choice for working suits. Standard clothes will use paillettes a lot, 'cause underwater there is such a few light, matte clothes would be too anonymous...

Warfare would see an evolution from fish bones to shell plates, crab full plates, heavy whale bones. The advancements in weapons will make such heavy armours obsolete and fighters will move to camouflage patterns on lighter textiles.

And for some reason when I think about octopus people I cannot help but figure them wearing monocles...

Semi-sentient (level of dog or lower - it can even be fungus) species that form symbiosis with wearer. It's not dead, therefore has less chance of dissolution and it allows for breeding better clothing - also, chance for genetic engineerimg at some point. Even we have some clothes that eat sweat at this point, I think. If we had symbiotic relationship with any species, we'd have contests for purebred symbionts as we have with cats, dogs, etc. Symbiosis between species is nothing new in nature, as is breeding better useful species in civilized setting. There could even be clothing rights activist that want there to be no clothing cruelty. If that,s not your cup of tea, shells are pretty durable in some species. There could be a crab colony protecting yor mermen. Can you imagine an underwater knight in crab armour, whose armour attacks you with the fury of the woman scorned waving dozens of tiny claws covered in some sharpening solution?

Have you looked at what human divers wear?

Really, any non-flush clothing would make absolutely no sense underwater. Why would a sea-based creature want to wear something that makes it move 3 times slower? And get easily entangled in things? (dangly clothing won't just sit down nicely as it does on land).

And what's this talk about fish skin? dead biological matter gets dissolved in moving salt water in days... What are you even talking about?

They would wear the same kinda stuff that divers/surfers wear - rubber, latex, neoprene... And it would be purchased from humans because it could not be produced underwater.

Aquatic species with gills has much less use for clothing than we do. They either survive direct contact with their environment or they die. So we can ignore protection from elements as a criteria.

Protection from attacks is feasible, but you are probably not asking about my designs for octopi plate mail. So let us skip that too.

So clothing would be used for status and decoration. The simplest solution for that is paint. Assuming your octopi does not have the color changing ability some octopi here have in which case they have no need for clothing ever.

So the octopi would paint themselves with their status identifiers and add some personal decoration to it. Richer and more influential octopi would have larger patterns and use more expensive colors. The common rabble would have no paint at all and being able to afford and earn some status markings would be the common goal. Trade in pigments would be thriving and possibly justify long range commerce.

Additionally small stones, sea shells, flowers and other small decorations could be attached as decoration. 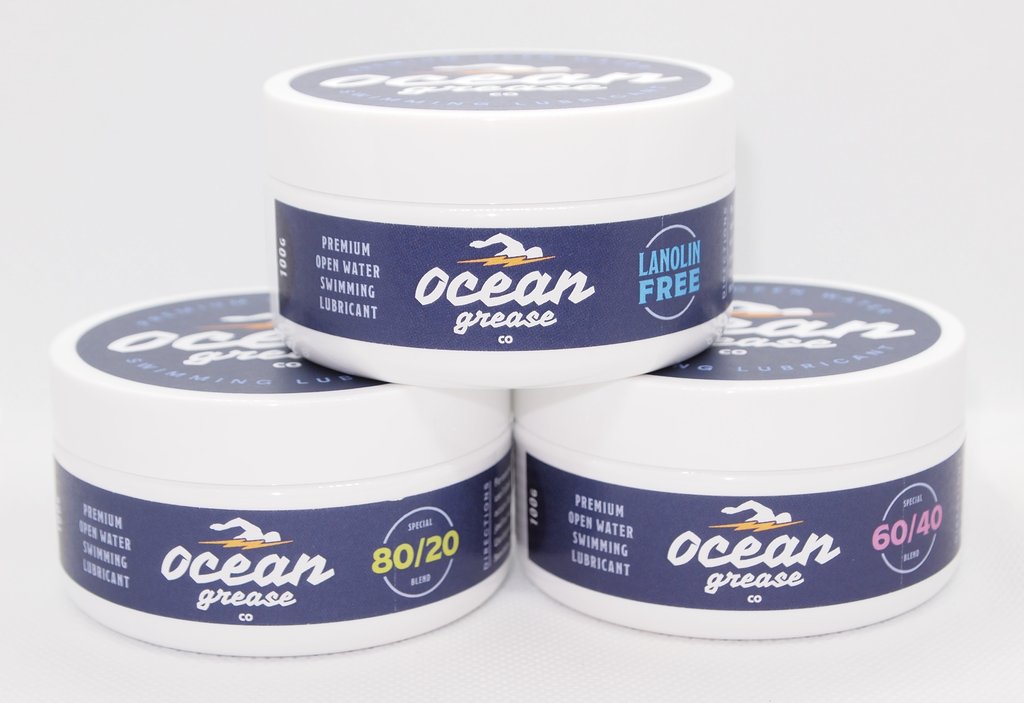 This would especially be true for a species which itself secreted a greasy coat. Grease reduces contact between water and skin, inhibiting unwanted cooling (or heating). Contaminants in the water touch grease, not integument, and are washed away. Parasites will be dissuaded by the grease film. The grease / water interface reduces friction. Also body paint can be decorative - I don't think distance swimmers go in much for this but certainly your aquatic species could.

Distance swimmers grease their bodies, which has a number of benefits including some of those above.

Octopi are an incredible order - and it just so happens that some species actually use something that could loosely be considered clothing.

Coconut octopi have been observed carrying pairs of half-coconuts or shells around with them to wear as camouflage and defense - as seen in this video. They pull the pieces together over themselves when they are lying in wait for prey or threatened. Now this is not really clothing as it is only put on when they come to rest, but you can see how the concept could be adapted into a sort of suit of armor. One of the benefits of being in the water is that it can support the weight of such armor, making it more practical than on land.

It seems unlikely that octopi would use clothing for warmth, as insulation would be of little use since they are ectotherms, so don't generate much heat. Clothing to keep them warm or cool would need active heating or cooling systems inbuilt.

I don't know about whether they would use clothing for status symbols or "decency", as your octopi analogues clearly differ a great deal from extant octopi in social behavior given that they have a whole society. Use of clothing as a status symbol seems plausible, given there are a range of similar behaviors in nature (such as bower bird nests).

However a major use of clothing you have missed is for disguise. Octopi are masters of disguise, and the best of the best is the mimic octopus. Clothing could be used to take it's disguises to another level.

I would suggest octopus clothing would likely take the form of a hard shell of some sort, which the octopus can draw it's whole body into when threatened or hiding. It might even have spines.

It would also probably be modeled after something else - either a perfectly innocuous rock, or another species - so as to fool predator and prey alike.

One of the key advantages of an octopus is it's ability to morph it's body into any shape, and I suspect they would be unwilling to give up this ability lightly. Therefore I expect there clothing might be quick release, allowing them to ditch it when they need to get through a small hole.

Below is a mock-up of a possible octopus garment 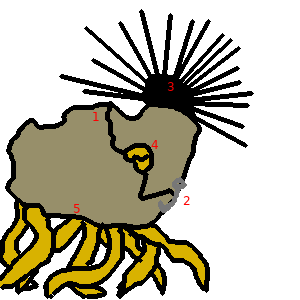 This suit has the following features:

Materials used for this garment

This could be constructed primarily from a piece of hollowed out coral rock. The urchin spines could be collected from real urchins (which might also be eaten). The spines might need to be replaced quite frequently, as they are quite brittle. The hinge and hook could be made from plastic/rubber which is found in abundance in our oceans, and lasts a long time. Or perhaps from biological materials, such as kelp fibers, fish leather or fibers from shark egg cases

Not the answer you're looking for? Browse other questions tagged society underwater clothing or ask your own question.

4
Mermaid Technology
2
Would an aquatic civilisation be able to exist under Europa's ice sheet?

41
What's the point of clothes?
4
How could an interested billionaire deploy sensors to as much of the deep ocean as possible?
11
Urban centers for octopuses
27
Would humanoids with fur be offended by fur clothing?
15
Would magic cause a medieval society to stagnate rather than progress technologically?
9
Could mermaids feasibly make clothing out of natural rubber?
4
Good approximative function to extrapolate weight of scaled clothing
6
Surface Clothing for Merfolk
7
Would wearing clothes over fur be uncomfortable?