What happened when my scientist drilled a hole through Europa's "crust"?

I gave this a quick test on sandbox, and agreed with the comment that I should steer away from the physics part and focus on the geology, etc.

Assuming Europa's ice crust is 10km thick as some speculate, and my explorers bore a drill-hole 1m in radius to the salt water below, would that create some kind of rupture, geyser or blast from a release of great pressure, or would it be more like ice-fishing, where I can drop equipment many kilometers down to the water section?

An explosion of water.

A similar question is actually answered here. But, I'll summarize, to prevent a link only answer.

First, it's probably obvious that the natural water level is not going to rise above the ice. The ice would be floating on the water, so you're not going to flood the surface, but it's also not going to stay where it is. 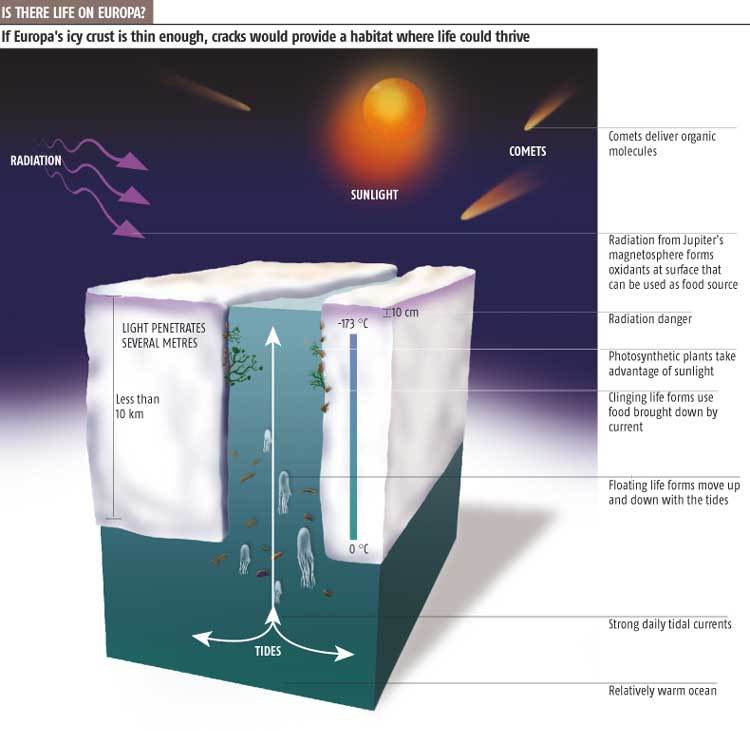 Europa's oceans are under a great deal of pressure. The surface is nearly a complete vacuum. The difference it what we're concerned about there. The situation would be more akin to making an ice fishing hole inside a vacuum chamber.

Upon breaching the ice into the water, the pressure differential would equalize. Water would rush up the drilled hole and explode into space (like frozen by the time it reached the surface). This is part of what is happening when the plumes occur, the ice cracks and water can get to the surface. It would eventually settle at a level below the surface, but you're probably going to lose your drill.

Opening a borehole through the ice of Europa would be essentially like ice fishing (the ice is floating on top of the ocean, after all), with the added complication of having a vacuum at the borehole end.

Assuming the drilling equipment is left out on the ice and the scientists are in an insulated (and radiation protected!) hut a kilometre or so away, they would see a plume of water vapour rising into space, rapidly condensing out into "snow" and gradually covering the drilling site until the intense cold finally causes the surface to crust over.

If the scientists are a bit smarter, the drilling site is also covered, and pressurized to the extent that the water would not instantly start boiling once the ice has been broken through. Due to the intense cold, however, there will either be a need for powerful heating elements to keep the borehole open, or for the scientists to accept that the hole will gradually freeze over, and take steps to redrill it every so often.

This might actually be the preferred course of action, since the ice plug filling the borehole prevents contamination of the waters below, and also provides a relatively easy path for the drill to cut back into the ocean when they are ready (the ice in the borehole will not have been severely deformed by pressure like the virgin ice drilled through initially, and radar or sonar can help the drill operators follow the channel of low density ice back to the ocean quickly and effectively).

Not the answer you're looking for? Browse other questions tagged hard-science geology underwater or ask your own question.

12
How could you dig a hole through the fluid mantle of a planet?
3
What would perforating the crust of a continent do?
2
Asteroid making a hole through the crust
1
What happens when aliens vaporize the Panama Canal?
3
What would be the chemical composition of the crust and core of a planet comprised primarily of diamond?
5
If someone dropped a black hole into the Sun, when and how will we notice it?
6
What is the crust of a habitable planet with Io-like heat-pipe tectonics made of?
4
What size of black hole is the safest?
2
What happens if continental crust overrides a divergent boundary?
5
What effects would discharge of high-voltage supercapacitor through one's hand cause?