What do we get if we eat the moon?

Imagine we have a machine that can consume celestial bodies, breaking them down into component elements and storing them in big bins somewhere. If we fed that machine a moon, what would wind up in those bins?

As is to be expected, we know more about the surface and the atmosphere (yes, there is one) than we do about the mantle or the core.

The composition of the lunar core is not well constrained, but most believe that it is composed of metallic iron alloyed with a small amount of sulfur and nickel.

The largest portion of the Moon is the mantle. This is the layer between the crust (the part we see) and the inner core. The composition of the mantle is similar to that of the Earth, but the Moon may contain a higher percentage of iron.

Scientists have samples of the lunar crust and take measurements of properties of the Moon's surface. The crust consists of 43% oxygen, 20% silicon, 19% magnesium, 10% iron, 3% calcium, 3% aluminum, and trace amounts of other elements including 0.42% chromium, 0.18% titanium, 0.12% manganese, and smaller amounts of uranium, thorium, potassium, hydrogen and other elements.

Composition of the tenuous lunar atmosphere is poorly known and variable, these are estimates of the upper limits of the nighttime ambient atmosphere composition. Daytime levels were difficult to measure due to heating and outgassing of Apollo surface experiments. 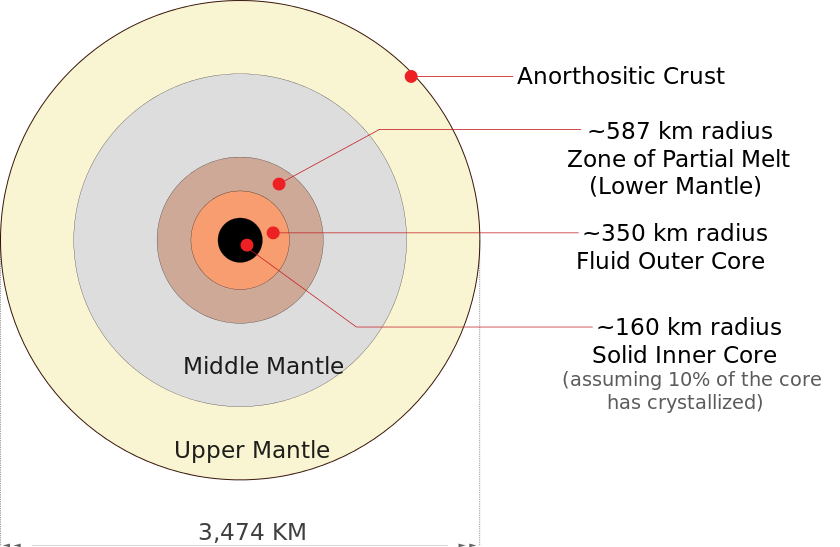 Note: Thanks to Kromey for the MathJaX.

Not the answer you're looking for? Browse other questions tagged science-based geology or ask your own question.

17
Can we breathe the moon's crust?

13
How To Eat the Moon
3
How do I explain the formation of my world scientifically?
8
Feasability of plasma based garbage recycling into pure constituent elements
24
Malign Science: Counter argument for KT boundary
14
What kind of Gas Giant has a "safe zone" between the radiation from a star and the radiation from a gas giant planet?
8
The Great Oxidation Event...Artificially Imposed on a Tharn-Like Alternate Earth
5
Would it make sense to mine/industrialize the planet Mercury with AI?
7
Is there a plausible way to have a Gas Giant with two or more earth to mars sized moons orbiting it in the Habitable zone?
4
What would a carbon-based organism encounter deep in Saturn?
13
Countering the threat posed by a rogue Moon-spanning AI