Do mermaids lay eggs underwater or give birth to live young?

Let's pretend these magnificent and beautiful creatures are able to reproduce asexually so we can forget about their mating habits or their partners.

I have yet to witness any hard shell eggs laid underwater by any species and most mammals like to bear live offspring even underwater, just like whales and dolphins. Sea turtles prefer to bury their hard shell eggs in the sand on the beach partly because these eggs need certain temperature to develop.

Is it possible to have soft shell mermaids egg/spore in the sea/ocean?

creature-design underwater merfolk
Share
Improve this question
edited May 31, 2016 at 22:03

Unless the mermaids you're imagining are significantly more "alien" than the ones in typical mythology, then it doesn't make a lot of sense for them to lay eggs.

Mermaids are supposed to be half human aquatic beauties - that, to me, implies that they are mammals, and thus bear their offspring until giving birth to a living baby.

If, however, you'd like to make them utterly inhuman, then sure, they can lay eggs like fish. They may be limited in where they can lay them based on the pressure the eggs can withstand, the temperature of the water, etc. They may lay the eggs in caves along the shore which they can then guard, for example.

This is explained in Futurama by Umbriel the mermaid:

I'm not your first am I? I mean, I-I lay my eggs and leave and you release your fertiliser.

(Note that Umbrel is a moon of Uranus. Just like another famous mermaid, Ariel) 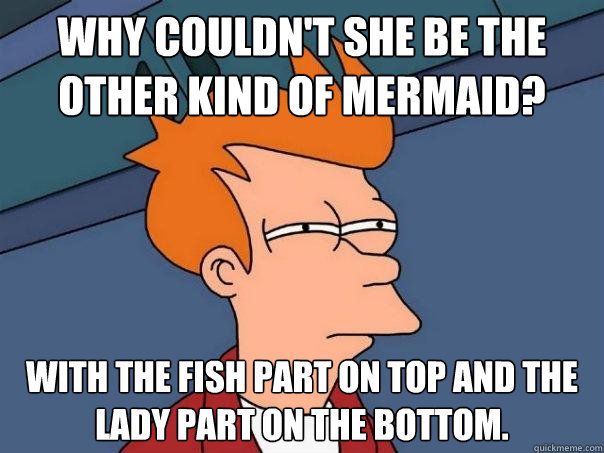 As we all know, mermaids have the human half on top and the fish part on the bottom (though some wish it was the other way around).

While they may be classified as mammals, not all mammals give birth to live young. The notable example is, of course, the other chimera of the animal kingdom, the mighty platypus. Eggs don't need a hard shell underwater for the same reason octopuses don't need skeletons, they're supported by the fluid around them and internal hydrostatic pressure. As they're made of essentially incompressible liquids, they can be at any depth (perhaps near volcanic vents for warmth).

It depends on their tail, the more likely and realistic tail is a dolphin or dugong (manatee) tail instead of a fish tail, in which the mermaid would give birth to live young.

The less likely would be the fish (or even reptile) tail. As AndreiROM said, this would probably make the rest of the creature less mammalian and therefore less human, so not a half-human aquatic beauty. In this case they would lay eggs.

With only forelimbs and no hind limbs, I'd guess they'd stay underwater and lay soft-shelled eggs. Saying that, if they lay hard-shelled eggs on land it could explain what they're doing on the surface when they're spotted by sailors and fishermen.

Although it's not relevant to the question but instead the context for the question, I want to say just one last thing as a side note.

How would this species ever survive or even evolve into existence with only asexual reproduction? I suggest that the species comprises of one sex that has a unique sexual system that allows exchanging of genes (a simple one would be that they simply lay eggs and then fertilize each other's eggs. A few will become clones and a few will mix, or they could control the fertilization to remove chances of clones.).

In part, you have made an unwarranted assumption - that merfolk reproduce like "higher" animals, with either live birth or large eggs.

The life cycle of mers is completely up to you, and there is no reason to think of the young as recognizable, smaller versions of adults.

For all you know, mermaids produce hundreds or thousands of small eggs, like frogs or fish. The hatched young go through several life cycles, eventually becoming something like their final form. At some point they would join groups of adults to become socialized and educated.

Or not. Like I say, the subject is obscure.

If you google for "mermaid purse", you will find pages about egg cases. They look like this (taken from Wikipedia): 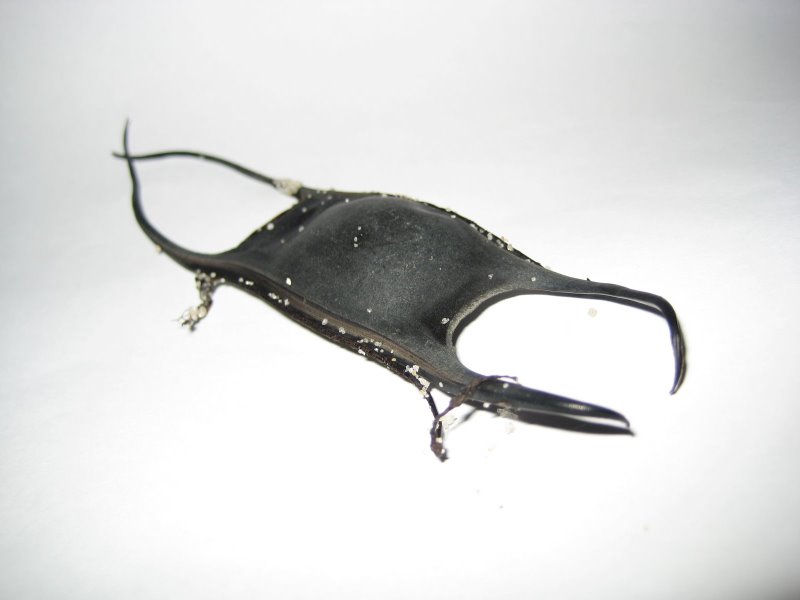 So when you see that lady casually swimming around the sea, doing her underwater shopping and chatting with her girl friends, and you notice her lady bag - it hasn't got a mirror and makeup in it. That's where she keeps her unborn children.

Fish and Amphibians lay soft gel-style eggs, by the thousand.

Mammals have live births, with fewer than 10 offspring. Marsupials do lay eggs, or have pouches.

You notice that more advanced species have fewer offspring. Mermaids are intelligent (typically), so they cannot lay thousands of eggs, there will not be enough resources for a proper brain in any of them. Better brain means fewer offspring, which means better protection for each offspring (hard shell or newborn's ability to react to its environmnet)

Most of the previous answers make much harder assumptions than those actually found in nature.

I know of no reproductive process in the animal kingdom that doesn't have an egg or egg-analogue at some point.

Also, most of the cited situations (reptiles do this, mammals do that) have more exceptions than the answers imply.

While 'most' fish/amphibians/reptiles do lay eggs, many don't. While the platypus lays eggs, most mammals don't.

Some fish and reptiles (specifically some shark species and anacondas) hatch their eggs inside the mother, and then 'give birth' to live offspring. I don't see any significant difference (at least as far as this question is concerned) between that process and the process of a mammalian amniotic sack(egg-analogue) breaking, and then the mother 'giving birth'.

In the end, there is an 'egg', and it will 'hatch' and the offspring will come out of the mother whether still in the 'egg' or not. So the level of 'fish-like' qualities vs the 'mammal-like' qualities of the merfolk isn't really a factor. Instead, the answer is which fish and/or mammal is the mermaid the most similar too, in terms of reproductive biology. It could be mammalian, and still lay eggs, or fish/shark and still give live birth, or not.

Yes, it's entirely plausible for a species of merfolk to have relatively softshelled eggs, if that's how you want them for the story. And it can be adjusted anywhere along the entire range of mammal, amphibian, reptile, or fish spectrum as needed.

Not the answer you're looking for? Browse other questions tagged creature-design underwater merfolk .

3
How mermaids watch news live on TV underwater if conductivity of sea water affect electromagnetic signal?
21
How do mermaids perform major surgical procedure underwater?
8
Is there a way for human-sized oviparous humanoid mammals to produce young in eggs without going the full marsupial route?
12
How might a highly intelligent aquatic species (mermaids) communicate underwater?
8
How would mermaids collect oxygen for their underwater cities?
3
Could this idea for an anatomically functional merfolk "sound" plausible?