I'm writing a story about an alien race that is blind and deaf: They communicate based on touch and scent, and have a tech level generally similar to us.

I'm assuming that they can measure frequency and amplitude of sound and light, even if they can't sense them directly.

Let's say they get access to our broadcasts of TV and radio into space, and they interpret the sound data into essentially a line graph of frequency and amplitude.

How much sophistication would be needed to separate speech from a dog barking, a door closing, or a laugh track, for instance?

This is related to my question here.

They could absolutely tell that the received data contains information.

However, they will not necessarily decode that information as sound. There is nothing in a radio or TV broadcast that would tell them what medium the data should be converted to after it is demodulated and decoded.

Let's stick with basic analog radio transmissions to keep this simple. There are two fundamental types of modulation that you're probably familiar with: AM and FM. Which mean Amplitude Modulation and Frequency Modulation, respectively. Both use the concept of a carrier wave and then modulate that wave to send out a signal over radio frequency.

The above plots are the signal amplitude with respect to time. The "modulating wave" in this case might be that sound wave plot you're hoping the aliens are going to discover. The carrier wave is modified by the modulating wave in two ways shown, by changing its frequency or changing its amplitude. The frequency of carrier wave, by the way, is what you are tuning your car radio to when you want to listen to the radio. If you tune to 91.5 FM (my local NPR), the carrier wave frequency is 91.5 megahertz, or going up and down 91.5 million times a second.

Amplitude modulation simply changes how strongly that carrier comes in to your radio while frequency modulation changes the frequency up and down (usually by a maximum of 25 kHz in either direction).

Your radio demodulates the received signal by removing the carrier wave, which leaves the original modulating wave for you to listen to. The electronics for these simple modulation techniques are not all that complex. We won't get into digital radio or television, but they're rather different.

Now, your aliens have received this signal. They will likely be able to determine that it's being modulated, because it won't be like any radio signals that come from natural objects. Amplitude modulation is probably easier to figure out, but plotting the change in frequency with respect to time is also a simple thing to do.

But where do they go from there? They're left with a plot of a waveform that changes with respect to time, but no information as to how that signal should be used. For all they know it could be a control signal for a device that spins back and forth or it could be a touch signal sped up 20,000 times to compress the information. The might interpret it as the combination of sine waves at different frequencies that relay information based on the frequencies and their respective amplitudes (via an alien version of a Fourier transform).

They might make the logical leap that it's a signal meant to vibrate a diaphragm in an atmosphere, but as they have no concept of sound, that's unlikely. In either case they will may eventually be able to decipher that it is language and would be able to respond in kind. But if we ever met them in person, they would not be able to understand our speech unless we transmitted it to them via radio.

What you describe is a typical way to process sound waves. We usually use a fourier transform (or sometimes a wavelet transform) to get it into that space. However, it's usually not a line graph, because there are many frequencies going at any point in time.

Why do we do it in frequency space? Consider this amplitude vs. time graph:

Its not easy to distinguish the content. You'll have to take my word that that's Churchill speaking, followed by laughter, then a dog barking, and finally a door being slammed. However, if we put it in a frequency space (using a fourier transform, which is very easy as far as signal processing algoritms go): 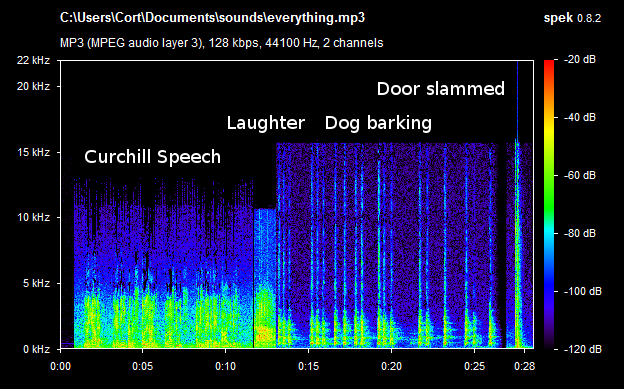 As you can see, laughter is a bit harder to distinguish from speech , but you can see a lot more "content" in the speech pattern. The laughter is more repetitive with the same content at each explosion of laughter. Likewise, a dog barking shows a set of tones in the 0-2kHz region, while a door slamming is pretty broad spectrum. (The different clipped off regions at the tops arise because I got the sounds from different sources, and each one was compressed to a different level)

They might develop similar systems for sensory substitution like we've done. Let me toss out a couple of links on the concept:

The general gist of these is based around a concept called neuroplasticity; the idea that the mind can adapt to various input. Some of the more simple experiments deal with people wearing goggles that invert their vision (everything is upside down) but after a few days the brain adapts and the person carries on like nothing changed.

Another experiment from the Wired article involved a belt with several vibrating nodes (like in your cellphone) ringed all along its length. The only node that vibrated though was the one facing north. This gave a perception of magnetic alignment to earth's magnetic field (kind of like what we assume a migratory bird might have). The user said he had in innate perception of location and direction after his mind adjusted to the touch->direction sensory input.

Another use involved using touch to help the blind "see" again by way of electrical impulses on the tongue, providing a sort of three dimensional touch map of a room.

While not being able to recognize light waves might work for the vision, even the deaf can 'hear'. Sounds is a form of energy that travels through matter. The engines of the ship will rumble, the thunder storms of their home planet will shake the ground. So while they might not have ears and specialized organs to 'hear' sound, they will still definitely have some understanding what it is and some way to interpret it, since it will impart energy to the being that can be 'felt'.

Now if they have enough of a sample that is recognized as alien generated in origin, they would likely eventually come to the conclusion that it is a form of communication.

Edt: BTW for this alien species to even make it to the stars, they need to already have an understanding through some sense of space and distances with the celestial bodies. Or what will stop them from running into anything? The easiest way is electromagnetic sensors of some kind. Some kind of gravity detection might be possible as well, though that is a much more subtle thing to detect and it is highly unlikely that an organism that evolved on a single planet would have any need to detect gravity naturally since it is generally the 'same' everywhere. So it would have to be some kind of tech, which came much later.

The level of sophistication required, is to be able to build a machine that converts audio signals into a tactile interface.

E.g., blind people can read because a tactile from of the written word was created for this purpose. And also, the deaf can 'hear' what people are saying on TV via subtitles.

Note: To evolve tactile sensory, without ever gaining 'hearing', is strange indeed. Even the deaf can feel music.

Not the answer you're looking for? Browse other questions tagged science-based aliens language or ask your own question.

10
How could a blind alien race interpret video broadcast into space?

2
How do we communicate with (fairly) intelligent aliens?
18
How to name aliens?
8
Social engineering: Design a new language for a totalitarian state obsessed with scientific advancement
14
Writing system of blind, sea dwelling sentients?
9
Creating a scientifically semi-valid super-soldier, part 8: Communication
6
How would an animal make concussive sound waves from its mouth?
3
Could a vehicle levitate through use of ultrasonic sound waves?
11
Sound Waves as an Organism’s Energy Source?