How could Earth's atmosphere become unable to sustain life?

In a story I am (at least attempting) to write, I plan to have Earth's atmosphere become unlivable by humans. I assume that Earth's atmosphere could not be ignited by a solar flare event, because it doesn't have enough oxygen or other flammable gases for this to happen.

Some other possible causes for Earth to be uninhabitable:

Any refutations or concessions as to why any of these ideas above might not work?

The Earth's atmosphere is rather hard to destroy because there is a lot of it.

Global Warming even extreme projections of anthropogenic global warming do not make the atmospheric too hot for human livability. At worst, some areas may be too hot, but this is a long way from the atmosphere being lethal.

Nuclear Winter Worst case estimates for nuclear winter are still far less than that caused by the K-T extinction (the dinosaur killer). Although a large die-out, the K-T did not cause extinction because the atmosphere was lethal. Food shortages, climate change, etc. would have been the cause for extinction.

Nuclear War We could detonate ever single nuclear weapon ever made and there would not be enough radiation to extinguish mankind regardless of all of the movies and books you've seen. The atmosphere is not particularly susceptible to becoming highly radioactive, and most of the possible atmospheric isotopes are relatively short lived.

So, how can you destroy the atmosphere?

1) Remove much of the atmosphere via unprecedented Coronal Mass Ejections, or a gamma ray burst from a nearby supernova.

2) Pollute the atmosphere -- some air-borne toxins could in theory be produced in sufficient quantity to pretty much destroy humans. Some are biologically active, some are chemically active. Would take a lot of effort, but it is possible. Possibly a number of comets with an unfortunate chemical structure (unlike any ever analyzed)

3) Destroy the ozone layer. Possible via cometary/asteroid bombardment. Possibly by chemicals we put into the atmosphere.

By losing the ozone layer.

This nearly happened to us. But, in an uncharacteristic show of environmental cooperation, humans were able to drastically reduce the use of ozone depleting chemicals and prevent what would have amounted to global destruction. I'm going to duplicate a lot of a previous answer I gave describing what would happen to a world without an ozone layer.

The UV index typically goes to 11, which is considered extreme, especially for mid-latitude cities.

This site provides the above graph which includes: The solar spectrum above the atmosphere (A), and at the ground level (B, C), ozone absorption (D), and the erythemal action spectrum (E).

The vast majority of radiation, especially for the more dangerous shorter wavelengths is absorbed by the ozone layer. The ozone is responsible for absorbing all the UVC and 90% of the UVB.

This simulation explores what would have happened if we hadn't banned ozone depleting chemical use. It shows how the UV index would change for mid-latitude cities as the ozone depletes. It actually bottoms out at just under 30% our current ozone, so the UV index for 0% ozone would be much higher. The correlating decrease in ozone for this UV index increase is provided here. 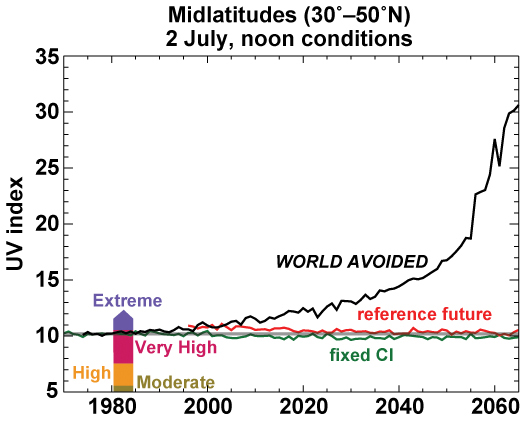 The loss of the ozone layer would bathe the surface of the Earth in powerful ultraviolet radiation killing many surface bacteria and rapidly making the surface inhospitable to unprotected life. Such a massive die off in surface life would likely throw the Earth's biosphere into a tailspin, likely leading to global extinction levels that have never been seen before.

In Hal Clement’s The Nitrogen Fix

The plot revolves around a nomadic family in a future where all oxygen in the Earth's atmosphere has combined with nitrogen, so the atmosphere is mostly nitrogen with traces of water, nitrogen oxides and carbon dioxide, and the seas are very dilute nitric acid.

At the end the aliens reveal that they are basically tourists or scientists, and they travel from one system to another over thousands of years. Atmospheres "mature" when the nitrogen absorbs all the oxygen, the cause being the inevitable evolution of bacteria that use gold to catalyze the reaction. It is hinted, but not stated outright, that human mining of gold triggered this reaction.

What could be a prequel, Half Life, uses the same mechanism but is set during the period where the ecosystem is failing and all living things simply die at a greatly accelerated rate for reasons being explored. The answer is the rise of the new kind of life contaminating everything with the new enzymes.

Humans engineer bacteria or nannites that can break down plant matter and Chlorophyll specifically. They get out into the wild, are spread by animals and/or the wind and start killing plants worldwide.

Oxygen production all but stops and the rotting process of all those plants depletes the atmosphere of it much faster than humans would have on their own, leaving a toxic nitrogen/carbondioxide atmosphere.

Basically, you reset the planet to the time before oxygen producing life arose , though the balance will eventually be restored.

A gamma ray burst might do it. The radiation would split nitrogen and oxygen molecules and many would recombine into nitrogen oxides. The radiation might itself be lethal to life on the exposed side of the planet, but it's the sudden total chemical rearrangement of the atmosphere that dooms life on the other side.

Arriving at the speed of light it could not be seen coming.

Actually the range of microbial life is so great and some habitats so deep that I'd expect life to survive. But land-based higher organisms? Not a hope.

Greg Egan wrote about a lower-dose GRB (of extra-galactic origin!) in "Diaspora", which wrecked the ecology of the planet and persuaded all surviving humanity to upload into virtual realities.

Not the answer you're looking for? Browse other questions tagged science-based reality-check environment or ask your own question.

5
What would the average UV-Index of New York City be, if the ozone layer was completely depleted?

6
Postapocalyptic, Venus-like planetary atmosphere
1
Habitability of our solar system when Sun becomes red giant
3
Could the sun reach a state that emits constant solar flares and CMEs?
1
Would it be feasible for a series of coronal mass ejections (CME) from the sun to cause E1 EMP damage to electronics on Earth?
11
How do I increase air pressure for the planet Mars?
8
Effects and feasability of a modern-day Olympus and Hephestus
4
How much heat would a 1km asteroid release into earth's atmosphere?
4
Post- Nuclear Holocaust. Radioactive wastelands vs eco-system and chances of human survivability?
3
Mountain sized colossal animal--could it survive, and could it move it's body around?