What could cause a planet to be highly electrified?

I've created a small planet, about 90% the size of Earth, which orbits a pair of twin dwarf stars and is Earth-like in many respects. This planet's atmosphere is highly electrified, with lightning storms occurring nearly every night.

In fact, this planet's equivalent to plants use electricity to gain energy instead of light, using a process called electrosynthesis (an analogue to photosynthesis). What could possibly have caused my planet to become so intensely electronical?

Please include any details that might be pertinent, any at all, including but not limited to:

Any scientifically plausible answers are very much appreciated.

While not quite the same as constant lightning storms, you should consider that the moon Io passes through Jupiter's magnetic field and acts much like the armature in a dynamo, generating a "flux tube" which produces two trillion watts of electrical energy. I think that most biological functions which are powered by electrosynthesis will find this to be a satisfying arrangement. 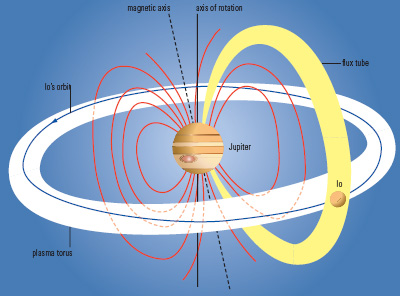 For this to work in your setup, the planet would have to pass through the magnetic field of one or both of the stars to generate the flux tube and cause the electrical energy to reach the planet.

Our universe is large enough that lots of weird things can happen. Believe it or not, we've found quite a few of them on exoplanets. This article about a paper on lightning on exoplanets (Bailey et al. (2014)) talks a bit about lightning in brown dwarfs and planetary atmospheres.

The point of the paper is that certain mineral grains in clouds can make lightning strikes more prevalent. Studies (on Earth) have also shown that volcanic plumes can produce copious amounts of lightning. Therefore, we can extend these theories a bit. I propose a planet with near-constant volcanic activity in at least one part of the globe, as well as strong winds in atmosphere that can move grains from plumes around quickly. If the plumes are strong enough, then perhaps the entire atmosphere could be effected enough to measurably increase the amount of lightning.

Not the answer you're looking for? Browse other questions tagged science-based planets earth-like electricity .

42
How can I explain a planet with perpetual rain?

26
What if an Earth-like planet had no axial tilt? (impact on ecosystem)
6
How could an organism produce energy from electricity?
26
Advantages of an electrified sword?
23
What could cause the Earth to be so endangered that mankind needs to relocate to another system?
55
What could cause sugary rain?
5
Giant, Periodic Geysers?
11
Weather with extreme seasons
4
Convection Cells in the Atmosphere of a Jupiter-Sized Planet
4
What could cause a planet to have hemispheres that rotate in opposite directions?