How can I make scythes a viable weapon in a (slightly) less-realistic world?

I've always liked the idea of scythes. Their connotation of death and reaping is always satisfying. But they're also a polearm, and that could make for some interesting martial feats. But nearly every discussion I see claims they would be useless as a weapon, due to the poor length/area of cutting edge, inward-facing blade, etc. Without moving the curved blade and/or its position (unless it shifts back and forth), what other problems does a scythe pose, how can I write them away, and most of all, what benefits would a "traditional"-esque scythe have in combat?

TL;DR: It can and has been done, although not with the exact same scythe you'd use for grass or wheat.

Well, people have used scythes (or more accurately, sickles) as weapons in combat. Most notable example is a kama, and a khopesh is also superficially similar, so perhaps you could have those and say they evolved from sickles.

The reason for use of sickles rather than scythes is that a scythe is a relatively modern thing; the long blade needed to make one work could not be manufactured reliably before steel became widely available. That's why people used shorter sickles instead, and adapted them as weapons.

You already seem to have a good idea of the disadvantages, but consider that a battle-scythe would probably be quite unlike a field-scythe (much like a battleaxe is quite different from a woodsman's axe). You could definitely add a spike for stabbing, make the blade shorter and thicker (and hence more durable), but at this point it seems to me we are arriving at an elongated halberd. Which, on the other hand, has a good service record, so you might just design a halberd differently and call it a scythe.

As for the advantages, the form of the weapon gives you a pretty good grip for slashing, and the perpendicular blade is good for hooking (much like and axe or halberd would be used), which is useful when facing people with shields.

But the main advantage is that in a mediaeval/fantasy setting, you can easily recruit a lot of people who are already trained with their weapons (ie. peasant farmers), if you can figure out a simple drill to let them transition from a field scythe to your battle-scythe. This is an important consideration, which has in practice led to development of war flails, voulges and war scythes, all of which have been used to great effect in warfare (the above three notably in the Hussite rebellions, which were essentialy a popular movement and defeated five separate crusades called against them).

The Scythe might need a few modifications for any kind of combat. the biggest on would be to have a longer collar attaching it to the handle, otherwise, it will likely be cut off after a few blocks or perrys.

giving the collar a little edge wouldn't hurt either. 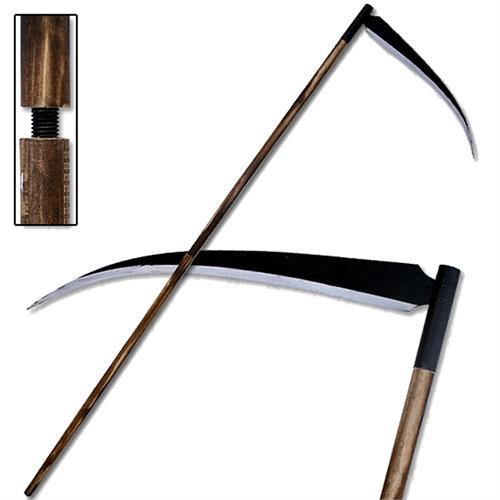 In a single combat situation, it might be used to delimb an opponent, but I suspect the scythe wielder would have to be much more proficient than their opponent. If the scythe is a symbol of death, and the wielders dress the part, they may be able to intimidate their opponents into mistakes.

The one situation that I could see the scythe being a possible devastating weapon would be when attacking a shield wall like the Romans had, the long handle could keep you out of range of the gladius and the long 90 degree blade could reach down over the shield wounding the holder and possibly yanking the shield out of their hands and the wall

Since you're giving me "in a (slightly) less-realistic world?" to work with I feel like a couple of potential options present themselves.

For starters it's possible that an entire form of martial arts has been developed around the use of the scythe (and possibly other farming implements) as a means of dealing with frequent raids or attacks in a largely agricultural nation. As such no extra weapons are required citizens don't have to "beat swords back to plowshares" they can literally just keep using the same tools for farming and combat.

The other would be something you mention about the blade shifting back and forth. Simple spring loaded locks near the handle could allow the blade to snap into a combat scythe shape at the push of a trigger. This would take it from farm mode to war mode in an instant; and then properly trained peasants can form something like pike men lines to stop cavalry or the like.

I may be a little late, but I've actually designed a prototype for a scythe which I believe to be usable in combat.

First I've reduced its total length to 56 inches and increased it's blade head side to 30 inches. Next I decided to add a bayonet-type thing to the other side of the head to allow stabbing and protect the shaft a little, I've also added a spearhead at the bottom of the shaft. To reduce the weight of the weapon a little I made the shaft out of a kind of fiberglass reinforced nylon which is lighter and more durable than wood. Finally I added a semi-sheath for the blunt side of the blade.

If you see any issue with my design please tell me. Hope I answered your question.

The tool is in fact a well-refined design for its purpose. In Midnight at rhe Well of Souls, one species is described as feirce fighters that resemble blades of grass! So, the scythe would be the right weapon in this situation, and it occorred in a book that sold a million copies, so it’s reasonable to have such an enemy it seems.

I would say that a good way would be to slightly change the make up of the weapon, but leave it still recognizable as a scythe. one of the biggest problems with scythes as weapons is the fact that it's only edged on the inside of the blade and not the outside, so I would say make the blade a tad thicker and edge it on both sides of the blade.

Another thing is that the weapon is unwieldy and off balance, so properly setting a center of gravity into the staff by some type of reinforcement would be necessary. Adding some type of counterweight on the bottom of the blade could actually double as a clubbing device as well.

Last but not least you would need the proper fighting style, as a scythe is again very unwieldy the style of fighting would inevitably be very momentum based, a tad similar to a bo staff's fighting style, a lot of fancy footwork and twirling and spinning to build up momentum and keep yourself protected, as well as enabling more than one attack in a single push, allowing you to twist the blade around into multiple strikes.

A bit late, but maybe making the pole arm out of a strong, flexible metal would work. Allowing the scythes cutting edge to bend outward creating a better angle of attack. It would also catch someone off guard if they weren't prepared for it.

In a way a scythe having a strong pole is what really matters scythes used in combat.

It can be used for a lot of acrobatic moves due to the long arm and curved blade, having one side weighted makes it better for spinning in a way because the weight is distributed to one side, so the scythe can be spun blade or pole first.

Forward curved weapons come with a several advantages and disadvantages to consider:

Many historical weapons could answer your question which by either use blades similar to the scythe but on shorter handles such as the the Dacian Falx or the Gallic Sicle, or long scythe like handles, but changed the profile of the blade like the war scythe, the bill, or the warpick.

So, why not both?

The design of the scythe is too specialized at delivering a powerful blow at the expense of other features. As a polearm, it is very unforgiving in terms of over or under shooting your opponent (which is why the bill and war scythe are shaped as they are) and even if you could land a hit, the blade is poorly designed to handle that much force smartly. Either you hit something soft and you bury your blade so deep in your opponent it gets stuck (solved by using a bec-de-corbin or poleaxe) or you hit heavy armor and the blade bends instead of punching through (solved by using a warpick).

Shortening the handle means you can use the weapon while locking shields with an opponent. While a scythe would be too long to strike at this range, once you lock shields, you can control distance meaning that a narrow threat profile can be mitigated. The shorter handle minimizes your other disadvantages related to poor balance by lightning the weapon and bringing the weight closer in to your hand, but it also takes full advantage of the good aspects of a distal weighted, forward curved weapon by maximizing the force you can get out of such a small weapon.

So that is the history lesson and the reasons why not to militarize a scythe, but that is not your question. I believe you could make it a viable battlefield weapon, but it would require just the right mix of added features and tactics.

1
Would an Agricultural Scythe work as a the Signature Weapon of an Assassin?
0
Making a scythe more effective / feasibility of the Scythe
6
How effective would a scythe be in a one-on-one, sword-versus-scythe fight?

7
How to make legged fighting vehicles (mecha) viable?
34
How can I make guns available, but not swords?
4
How can I make the Solar System uninhabitable?
1
How to make powered armor viable as a substitute for guns?
5
How can space-mines be improved as a viable weapons in interplanetary space warefare?
7
How could the sword be a viable weapon against modern technology, with the advantage of science-based superpowers?
13
I want to build a weapon targeting Interstellar distances. How viable are railguns?
1
Is my Plasma Gun concept realistic? And if not what can I do to make it more feasible?
13
How to make a weapon that never friendly fires?