What is the earliest that a civilization could develop airships?

Assuming a technological progression roughly similar to that of Europe in our world, what is the earliest that a civilization could have developed rigid-frame airships?

For example, one could imagine that steam engines could have been invented much earlier in history, because they basically were. However, skateboards wouldn't have been likely much earlier than the 20th century, because there weren't many flat, smooth walking surfaces during the ages of cobblestone and brick.

Given the technologies and and resources involved with creating and maintaining airships, how early could a civilization plausibly have developed them?

TL;DR: It all comes down to who can make the framework - and who has helium.

Blimps are fairly easy to make - at least, low-quality blimps are easy to make. In theory, all you have to do is insert some hydrogen (or helium, if it's cheap and plentiful) and let the thing fly. Sure, you have to make major modifications so you can actually steer the thing, but you can get it off the ground easily. The same goes for hot air balloons.

Rigid airships are a wee bit trickier. You need a very strong internal structure that can resists extreme pressure and keep the lifting gas inside. You can use small "cells" of gas

Image from Wikipedia user 84 user, currently in the public domain. 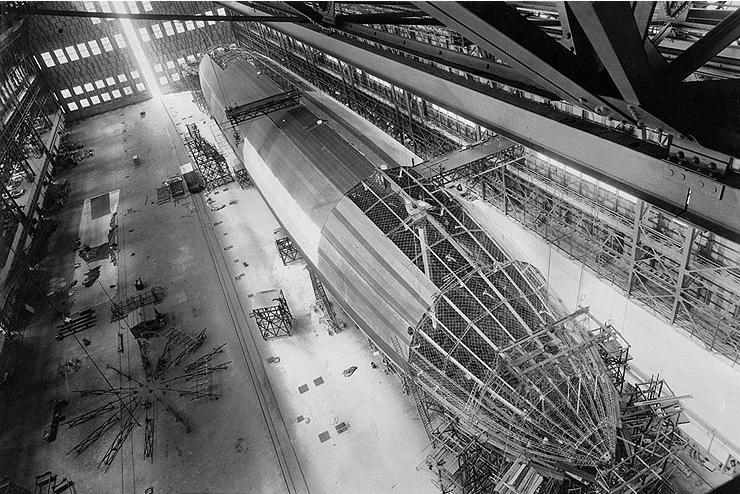 Image from Wikipedia user Saperaud~commonswiki, currently in the public domain.

You can make the lifting cells rather easily, but it's the rigid structure that presents the big problem.

The famous Zeppelins, often considered to be the greatest airships ever built, used a metal framework to hold everything together. Count Zeppelin's first creation, the LZ 1, used aluminum. It's more famous cousin, the LZ 129 Hindenburg, used a framework of duralumin, a strong aluminum alloy. Duralumin actually was first widely used in airships.

Duralumin was only created in the early 20th century, but aluminum as a material had been around for a while before that. It has been used in classical times, although it had really only become easy to make in the 19th century. It is surely easier to make aluminum than to make an aluminum alloy, and so it would be chosen first when developing an airship.

Regarding Mark's point about the Schutte-Lanz airships: Indeed, rigid airships could be made of wood. However, it wasn't exactly the best choice for large ships because moisture tended to compromise structural integrity. As Wikipedia says,

Wood composites had a theoretical superiority as the structural material in airships up to a certain size. After that, the superiority of aluminum (and later duralumin) in tension was more important than the superiority of wood in compression. Schütte-Lanz airships until 1918 were composed of wood and plywood glued together. Moisture tended to degrade the integrity of the glued joints. Schütte-Lanz airships became structurally unstable when water entered the airship's imperfectly waterproofed envelope. This tended to happen during wet weather operations, but also, more insidiously, in defective or damaged hangars. In the words of Führer der Luftschiffe Peter Strasser: "Most of the Schütte-Lanz ships are not usable under combat conditions, especially those operated by the Navy, because their wooden construction cannot cope with the damp conditions inseparable from maritime service..."

Materials aren't really a problem: the smaller Schütte-Lanz airships used a framework made of wood, and one of the common gas-tight materials used, goldbeater's skin, is simply a membrane from calf intestine. Steam engines of one sort or another have been around for centuries (even a simple reaction engine can provide propulsion -- no need for propellers or rotary motion), and hydrogen can be produced by just about any acid-metal reaction -- you just need to realize that those bubbles can be used to lift things.

The big problem with making rigid airships is scale. Rigid airships benefit strongly from the square-cube law: double the size of the airship, and you get an eight-fold increase in lifting capacity at only a (roughly) four-fold increase in weight. This also imposes a practical minimum size. Even a small airship requires a cathedral-sized hanger to assemble it, and the typical World War I Zeppelin required the intestines of 80,000 oxen to provide the gas envelopes.

Yes, all the pieces were there for the ancient Greeks to build rigid airships. The problem of scale, though, means that building one would have stressed their productive capabilities to the limit, or even beyond.

Not the answer you're looking for? Browse other questions tagged technology civilization flight airships .

12
What are the consequences of using limited anti-gravity for steampunk-style airships?
21
Could hunter-gatherers develop complex civilization?
5
What do airships look like in the 1800s?
23
How advanced can a civilization get without zero?
4
Can I have an otherwise High Medieval society, if they are in perpetual Bronze Age?
2
Given IRL technological advancements, what's the earliest someone could plausibly invent commercially viable desalination technology?
7
Lowest tech to generate electricity with mirror solar thermal tower
21
Pre-Modern Shipping Containers?