Is there any possible way that a pacifist survival group could survive a zombie pandemic. When I say pacifist I mean to both zombies and humans.

Zombies in this world fall into this category:

Living Things are Composed of Cells

Living Things Respond To Their Environment

Living Things Adapt To Their Environment

Excluding plants because of a comment by a user.

And there're rare for are considered living things.

EDIT: My full definition of pacifist in this scenario: A person who wishes for no living thing to be harmed in any way directly or indirectly.

EDIT2: The situation is sum what like Left for Dead not every one is infected but a large amount of the population is. The zombies are mostly slow moving and weak.

Could they maybe...if they are lucky.

If you happen to have a bunch of pacifists on an island far away from the mainland they should do alright given they can actually find food and whatnot.

Now...if they are on the mainland and zombies are around them things get tricky and it really depends on how they define pacifism.

If they define pacifism as I will neither cause harm through direct nor indirect action well...they are pretty screwed and frankly...they should get eaten. Its one thing to be a pacifist toward other humans...another thing entirely to not be willing to smash in the face of a brain eating, undead, nature violating monstrosity. 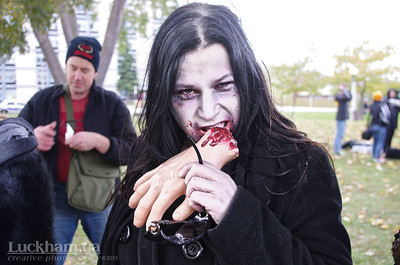 If on the other hand they hand they are willing to bend the rules a bit they could define pacifism as I will cause no direct harm to any other creature. Well now we have some wiggle room for them to defend themselves.

In this case they would need to rely on geography and traps, or mercenaries, probably best to go with both. A small area surrounded by lava works nicely (I may have been playing mine craft lately...).

But if they can hire mercs to keep an eye on things and can also make it perilous to get near their village/town/whatever, they should be able to survive as well as anyone else.

The best example of this in existing fiction is The Walking Dead Season 2, in which the protagonists encounter a group of people living on a farm who are convinced their zombie friends will be cured eventually and thus treat them like farm animals: using tools to corral them safely and feeding them regularly.

As long as the pacifists actively contain zombies they encounter, and can stay put in an area that is secure and can provide for their needs (e.g. an island), there is no reason this won't work. The area does need to be secure or remote enough to not only keep zombies away, but also less moral people who wouldn't mind taking over what they have. (Pacifists have no defense against other people in a zombie apocalypse except not being found.)

Not the answer you're looking for? Browse other questions tagged zombies or ask your own question.